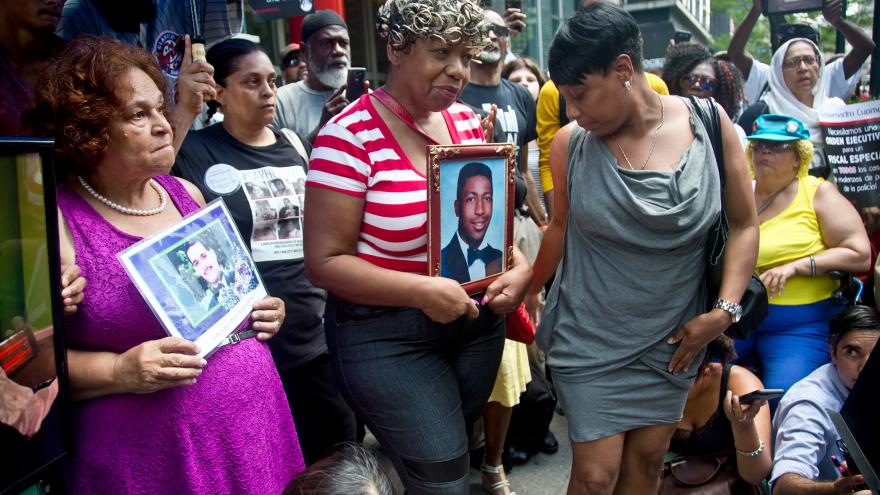 (CNN) -- A top-ranking New York Police Department official testified during a judicial inquiry on Tuesday there was "no coverup" in the internal investigation into officers who were on scene when Eric Garner was killed while in police custody but he questioned why Garner was charged with a felony for having five packs of cigarettes.

The judicial inquiry, a rare legal process that allows members of the public to look into alleged neglect of duty by public officials in New York City, began a day earlier and is led by petitioners including Garner's mother Gwen Carr.

The NYPD's Deputy Commissioner of Internal Affairs Joseph Reznick said there was no coverup and went on to address Carr, saying that as a father of three sons, he was sorry.

"I cannot imagine how you must feel," said Reznick, a 48-year NYPD veteran who was appointed the head of the NYPD unit that conducts internal investigations against department members the year Garner was killed. "If I had the power to turn back the clock and go back to July 2014 and change the circumstances I would."

Garner died after being placed in an unauthorized chokehold by then-police officer Daniel Pantaleo. Garner's final words -- "I can't breathe" -- were captured on video and have since became a rallying cry for police reform and the Black Lives Matter movement. Pantaleo was fired in August of 2019 following the recommendation of a NYPD administrative judge.

New York Supreme Court Judge Erika Edwards, who is presiding over the questioning, has said she will not be making decisions about charging anyone at the end of the inquiry, and that questioning will focus on the stop, the arrest and use of force against Garner by officers other than Pantaleo; the filing of official documents around his arrest; the leaking of his arrest history and medical conditions to journalists; as well as allegations Garner did not receive adequate medical care at the scene.

The petitioners are, in part, trying to determine the role, if any, that New York City Mayor Bill de Blasio had in decisions pertaining to discipline and investigations into the officers' conduct. Erika James, an attorney representing petitioners including Carr, repeatedly asked Reznick which other NYPD and city officials he spoke with about the case.

'I may have rushed the paperwork a little bit'

The internal affairs department will stand behind its 2014 findings into the officers and their supervisors in connection with Garner's death, Reznick said, while adding he questioned the charge against him.

"I questioned that felony charge right from the beginning when I learned of it," Reznick testified.

The arresting officer, Justin D'Amico, testified Monday that he filled out an arrest report hours after Garner was killed that charged the Staten Island father with a felony cigarette tax evasion charge among other things. The state law D'Amico cited in his report requires the person charged to be in possession of 10,000 or more cigarettes for the purpose of selling them. But in his report, D'Amico wrote Garner had been in possession of five packs of cigarettes.

"Due to the circumstances, I wasn't thinking clearly. I may have rushed the paperwork a little bit," D'Amico said. On Tuesday, he said, "This was a total mistake."

Reznick said the main focus of the internal affairs bureau's investigation was Garner's death and that "the reason for his arrest or the actions of the officers was a secondary matter." Reznick said it bothered him that an arrest report for Garner was filled out after he died.

"Was there an ill intent on their part to either deceive or create something that wasn't there? I don't think so," Reznick testified.

He added the internal affairs bureau concluded there was "not a false statement" made and that investigators also concluded Garner was provided with "reasonable" medical care.

"We saw nothing wrong with what the officers did at the scene as far as providing medical attention," he said.

The four officers who were captured on video as taking part in Garner's arrest in July 2014 were interviewed by NYPD investigators on December 5, 2014, two days after a Staten Island grand jury decided not to indict Pantaleo, according to documents shown in court Tuesday.

Reznick testified the Staten Island District Attorney's Office had asked NYPD to hold off on interviewing officers while it conducted its own investigation and presented charges to a grand jury.