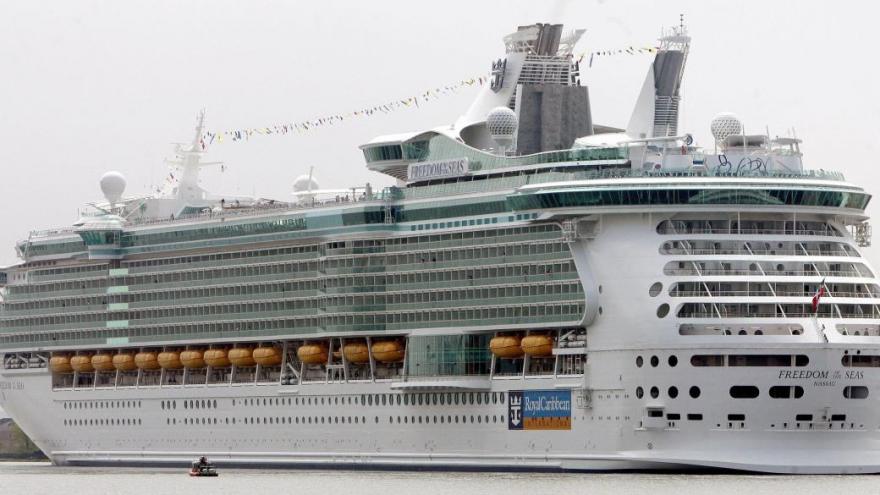 A toddler died after falling from a Royal Caribbean cruise ship docked in Puerto Rico.

(CNN) -- An American toddler fell to her death on Sunday from the deck of a Royal Caribbean cruise ship docked in San Juan, Puerto Rico, a spokesman for the local Port Authority said.

The 18-month-old girl was playing with her grandfather in a dining hall on deck 11 of the Freedom of the Seas, Port Authority spokesman José Carmona said. The dining area has large windows, and one pane was open.

The grandfather sat the girl in the window and lost his balance, and the girl fell to her death. "Sadly, she died on impact," Carmona said.

The ship was scheduled to depart for a weeklong voyage at 8:30 p.m. Sunday; the accidental fall happened about 5 p.m., according to Carmona. The girl's body was taken to a forensic unit in San Juan. Local police are still investigating the incident, which preliminarily has been determined to be an accident, Carmona said.

The family's attorney, Michael Winkleman, disputes this characterization of the incident. "I do think that there is going to be blame and significant blame on the cruise line," Winkleman told NBC News on Tuesday. He said that the toddler loved glass and windows, seeing through to the other side, and her grandfather had placed her on a ledge by a glass wall but had no idea one window within the wall was open.

"Why in the world would you leave a window open in an entire glass wall full of windows in a kids area?" Winkleman asked: "Why would you have that kind of danger without any warning, without any sign, without any notice?"

Winkleman said he will do everything he can to hold the cruise line "accountable for what appears to me to be negligence."

Royal Caribbean Cruises said in a statement Monday that it does not plan to comment further on the incident out of respect for the family's privacy: "We are deeply saddened by yesterday's tragic incident, and our hearts go out to the familyy. We've made our Care Team available to assist the family with any resources they need."

The toddler's father is a police officer in South Bend, Indiana, according to the South Bend Police Department. The department tweeted "its sincerest condolences to Officer Alan Wiegand and his family during this difficult time following the tragic loss of their child while in Puerto Rico." The department also asked the community to pray for and to respect the privacy of the entire family.

The girl had traveled to San Juan from the mainland with her parents, siblings and four grandparents.

The toddler's grandfather, Sal Anello, has worked in the IT department for St. Joseph's county for a little over a year, according to Mike Hamann, the county auditor.

"People love him here in the county. He's a very selfless man. He's got a servant's heart as we say," Hamann told CNN. "Just one of the most wonderful human beings that you could ever meet." He also referred to Anello as a "model employee."

Falls from cruise ships are not unheard-of. On Thursday, a Carnival Victory crew member was seen falling overboard about 30 miles northwest of Cuba.

The US Coast Guard searched for the 37-year-old man but failed to find him after more than 45 hours and so suspended the effort.

The Coast Guard does not estimate the total number of falls from ship decks each year, spokesman Jonathan Lally said. Still, "every cruise ship has a safety plan," and "they are required to give a safety brief," he said. The Coast Guard "strongly advises" passengers who board ships to follow all safety rules and plans.