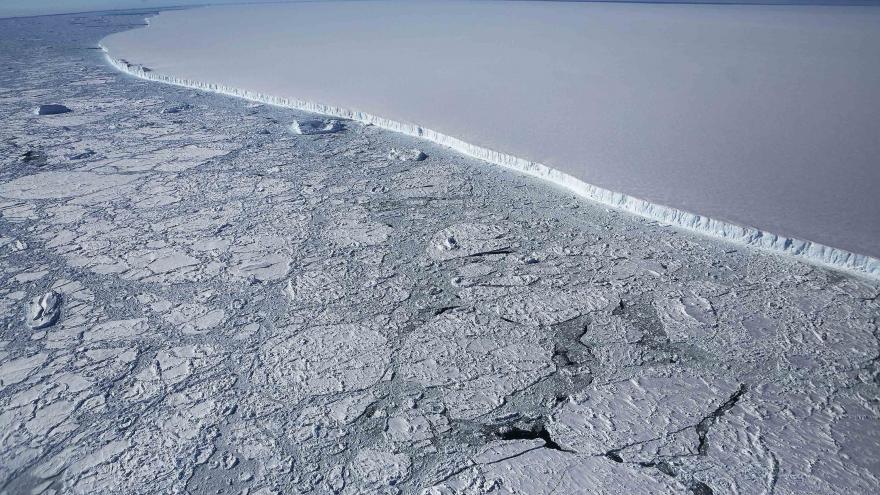 (CNN) -- More than a third of the Antarctic ice shelf risks collapsing into the sea if global temperatures reach 4 degrees Celsius (7.2 degrees Fahrenheit) above pre-industrial levels as climate change warms the world, a new study from the UK's University of Reading has warned.

In a forecasting study, scientists found that 34% of the area of all Antarctic ice shelves, measuring some half a million square kilometers, could destabilize if world temperatures were to rise by 4 degrees. Some 67% of the ice shelf area on the Antarctic Peninsula would be at risk of destabilization under this scenario, researchers said.

Ice shelves are permanent floating platforms of ice attached to areas of the coastline, formed where glaciers flowing off the land meet the sea. They can help limit the rise in global sea levels by acting like a dam, slowing the flow of melting ice and water into the oceans.

Each summer, ice at the surface of ice shelves melts and runs into smaller gaps in the snow below, where it usually refreezes. But when there is a lot of melting and little snowfall, this water instead pools onto the ice's surface or flows into crevasses. This deepens and widens the crevasses, causing the shelf to fracture and collapse into the sea.

"Ice shelves are important buffers preventing glaciers on land from flowing freely into the ocean and contributing to sea level rise. When they collapse, it's like a giant cork being removed from a bottle, allowing unimaginable amounts of water from glaciers to pour into the sea," study lead author Ella Gilbert, a climate scientist in the University of Reading's Department of Meteorology, said in a statement.

Gilbert told CNN that low-lying coastal areas, particularly small island states such Vanuatu and Tuvalu, in the South Pacific Ocean, are most at risk from global sea level rise.

"However, coastal areas all over the world would be vulnerable, and countries with fewer resources available to mitigate and adapt to sea level rise will see worse consequences," she said.

In the new study, which used high-resolution regional climate modeling to predict the impact of increased melting and water runoff on ice shelf stability, researchers say that limiting temperature rise to 2 degrees Celsius rather than 4 degrees Celsius would halve the area at risk and potentially avoid significant sea level rise.

The Intergovernmental Panel on Climate Change concluded in a landmark report that we only have until 2030 to drastically reduce our dependence on fossil fuels and prevent the planet from reaching the crucial threshold of 1.5 degrees Celsius (2.7 degrees Fahrenheit) above pre-industrial levels.

Global net emissions of carbon dioxide would need to fall by 45% from 2010 levels by 2030 and reach "net zero" around 2050 in order to keep the warming around 1.5 degrees Celsius.

"The findings highlight the importance of limiting global temperature increases as set out in the Paris Agreement if we are to avoid the worst consequences of climate change, including sea level rise," Gilbert added.

In the Paris accord, 197 countries agreed to the goal of holding global temperatures "well below" 2 degrees Celsius above pre-industrial levels and to pursue efforts to limit it to 1.5 degrees Celsius.

But we are on track for a world that is 3.2 degrees Celsius warmer by the end of the century.

Researchers identified four ice shelves that would be threatened by a warmer climate: The Larsen C, Shackleton, Pine Island and Wilkins ice shelves, which are vulnerable due to their geography, and the runoff predicted in those areas.

Larsen C is the largest remaining ice shelf on the Antarctic Peninsula, and the Pine Island glacier has received a lot of attention in recent years because it has been melting rapidly in response to climate change, Gilbert said.

If these ice shelves all collapsed, which is not guaranteed, the glaciers they currently restrain would flow into the ocean, contributing to sea level rise -- potentially by tens of centimeters, she explained.

The study was published Thursday in the journal Geophysical Research Letters.