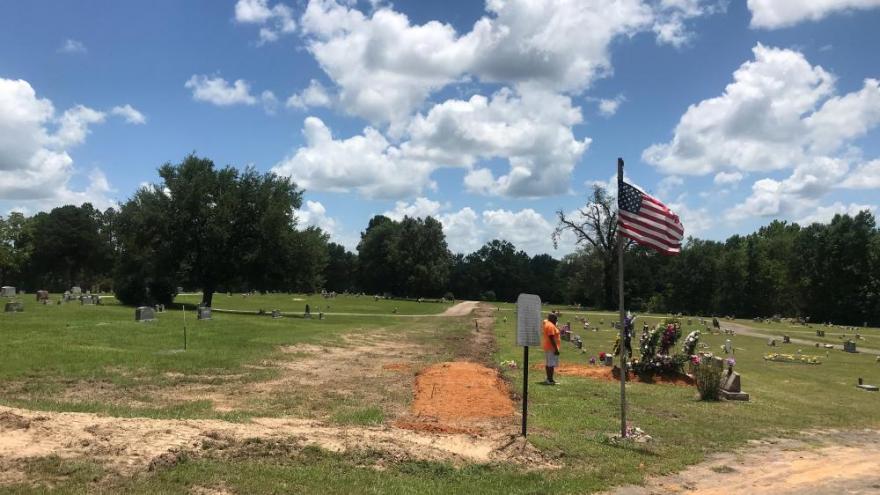 A metal barrier was the separation between burial areas at Cedars Memorial Gardens in Mineola, Texas, a town about 80 miles east of Dallas. Black people were buried on one side while Whites were buried on another.

(CNN) -- A 60-year-old chain link fence at a cemetery in Texas has just come down. And while its removal may seem unremarkable, for community members, that fence was a reminder of segregation that once existed in the town.

A metal barrier was the separation between burial areas at Cedars Memorial Gardens in Mineola, Texas, a town about 80 miles east of Dallas. Black people were buried on one side while Whites were buried on another. Each side is owned by a separate cemetery association, not by the city.

Over the past 20 years the issue of the fence had come up off and on, Mercy Rushing, Mineola city manager, told CNN. There was an effort in the past by citizens, with the help of the city, to ask the cemetery associations to consider removing this fence, but it didn't happen until recently -- on July 15.

It took a public works street department crew of five to remove all 1,280 feet of fencing, Rushing said. They finished Friday.

A 14-year fight for change

In 2006, Demethruis Boyd moved to town and became the pastor at St. Paul Missionary Baptist Church. After attending a funeral, he realized the cemetery was segregated and, as he told CNN, he couldn't believe that something like that still existed.

"I was really shell-shocked that in that season of time, the days we were living in, that something like that was still up and had the perception that it gave off," Boyd said.

"I got the explanation that in times past it was known as the White cemetery and the Black cemetery, and the fence was a divider between the two properties that were there," Boyd told CNN affiliate KLTV. "That kind of spearheaded my heart to kind of see what we could do about the presentation that it represented and possibly get a resolve that might be conducive with both parties."

After asking questions 14 years ago, Boyd said some changes were made, including the separation of burials based on skin color and a name change from Mineola City Cemetery to Cedars Memorial Gardens.

But the fence remained.

Boyd said an easement was created at the time, granting access between the plots and creating an opportunity "for all cultures to be buried on both sides."

United in life and death

On July 13, Rushing said she received an email from a former Mineola High School student who was attending a funeral for a classmate and said she didn't realize the cemetery had been segregated while she was a Mineola resident.

"She began to ask me if there is something that the city can do to remove the fence and make it where both work together and be united," Rushing said.

Rushing said that with the help of Boyd, she then got in touch with both cemetery property owners and brought them together to start a dialogue about the fence. Ultimately, they all decided to remove it.

"The fence that once separated us brought us back together by uniting and removing it once and for all," Rushing said.

Part of the fencing was saved "for future generations," according to Rushing, and will be housed at the Mineola Historical Museum and the Texas African American Museum in nearby Tyler.

Boyd said he was excited to see the fence come down, and that he believes there was an increased pressure to remove it because of the spotlight following the death of George Floyd, an unarmed Black man who died in Minneapolis in police custody.

"With all the national things that are transpiring, I think it was opening the hearts and minds of more people to get involved and to recognize the symbolism that it (the fence) represents to a greater degree," Boyd said. "Its removal was a historical event."