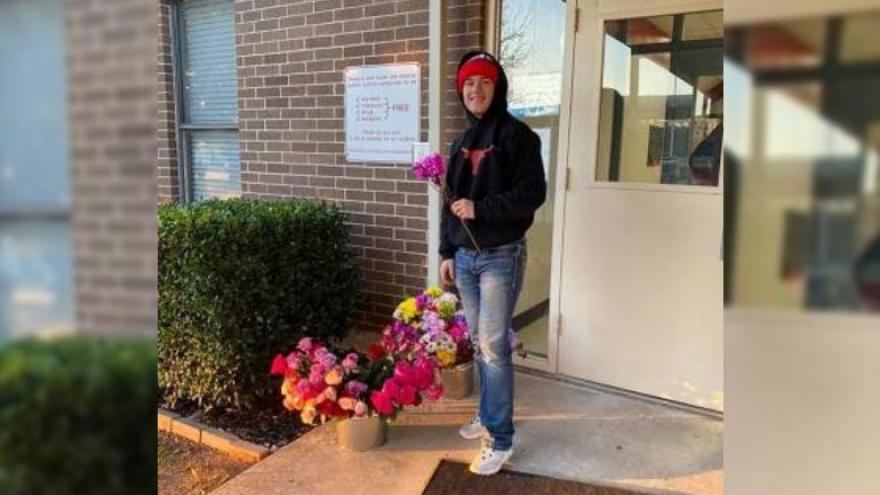 Jayme Wooley, 15, wanted every girl at his Texas school to receive a Valentine on Valentine's Day.

(CNN) -- Anyone who's been to high school knows how dreadful Valentine's Day can be for teenagers.

Those with admirers or significant others will get love notes, flowers and chocolates delivered to them in class or secretly in their lockers. But for everyone else, it can be downright heartbreaking.

A Texas student didn't want any of the girls at his high school to feel down this year — so he bought every one of them a flower.

Jayme Wooley, a sophomore at Axtell High School near Waco, Texas, said he got the idea after seeing some girls not receive any Valentines the year before.

"Over the past couple of years that I've been at Axtell, not all of the girls were able to get flowers and stuff. Sometimes, it'd just be a secret admirer or popular girls," Wooley told CNN. "It felt heartbreaking knowing that not every girl was feeling special."

So with the help of his mom, Wooley bought 170 flowers and handed them out to every girl from sixth to 12th grade that came to school on Friday.

Kennedi Sherrill, a fellow sophomore at the school, was one of the girls that received a flower from the 15-year-old Romeo.

"He handed me a flower and I thought it was really special because not everyone gets a flower on Valentine's Day," Sherrill said.

Amy Gordon, Wooley's mom, said it didn't surprise her when her son approached her about his idea.

Gordon posted a picture on Facebook showing the 170 flowers on their living room floor.

The post has garnered more than 1,000 likes and hundreds of comments. Gordon said the response has been overwhelming.

"We've gotten several messages from older women around their 30s and 40s saying thank you and that Jayme's their hero because they were that girl that never received a flower," Gordon said.

Gordon added that his one act of kindness sparked other boys to engage in their own acts of kindness, such as holding the door open for girls.

Wooley hopes to do this again next year and make it a tradition for every Valentine's Day.

"I'll probably never forget that moment of just seeing their faces brighten up," Wooley said. "I don't want anybody to feel less important than anyone else."

You'd think a guy with a heart like Wooley would already have a girlfriend, but he said he's still single. So girls, line up.