A huge fire at a Texas chemical plant is out, 4 days after it started 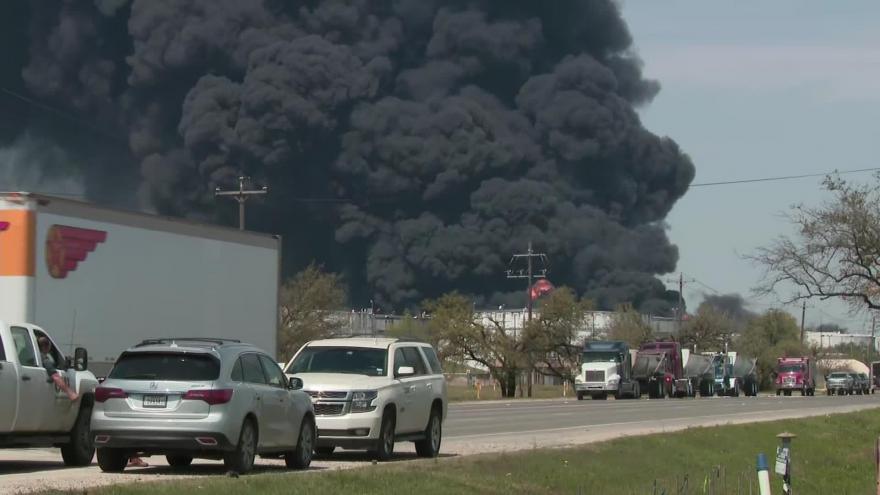 A specialty firefighting team from Louisiana has been brought in to battle a fire that has consumed additional chemical tanks at a plant in suburban Houston and sent towering black clouds into the air.

(CNN) -- A fire that burned over four days at a petrochemical plant in suburban Houston was finally extinguished Wednesday.

"As of 3 a.m. today the firefighting crews on the scene of the ITC Tank Farm Fire are reporting that all tank fires have been extinguished," Intercontinental Terminals Company said in a news release. "Crews continue to spray foam and water on the tanks to facilitate cooling and prevent reigniting of the remaining material."

The fire began in a single tank at ITC, a storage facility in Deer Park, Texas, on Sunday afternoon and quickly spread to a second tank, the company said.

A specialty firefighting team from Louisiana was brought in to battle the fire, and used foam and water, ITC officials said.

By late Tuesday, four tanks remained burning at the facility -- which was a reduction from seven earlier that day, according to Harris County authorities.

The battle had by then moved from a defensive mode to an offensive one, according to Ray Russell, a spokesman with Channel Industries Mutual Aid, a nonprofit that handles firefighting, rescue and hazardous materials in the local refining and petrochemical industry.

No serious injuries have been reported and the cause of the blaze is still under investigation.

As the fire burned, sending towering black clouds and a fireball into the sky late Tuesday, neighbors were worried about the heavy, dark smoke even as authorities sought to assure them the air quality remained in the good to moderate range.

Before the fire was extinguished, several school districts near the facility, including Deer Park and La Porte, said they would be closed Wednesday and canceled after-school activities, due to the conditions from the fire and changes in the weather.

"Weather forecasts for Tuesday night and Wednesday call for conditions that could cause the smoke plume from the fire to directly affect our school district and, in an abundance of caution, La Porte ISD has decided to cancel classes for Wednesday, March 20," according to the district's statement.

The school districts in the City of Pasadena, Channelview, Sheldon and Galena Park also announced they had canceled classes on Wednesday. San Jacinto College will also be closed.

Schools and businesses had briefly reopened Tuesday, even as some worried about the air quality in the area. ITC said that air monitoring near the facility has shown readings "well below hazardous levels."

Ryan Sitton, a commissioner with the Railroad Commission of Texas, which regulates oil and natural gas in the state, said several teams, including those with the chemical facility and the Environmental Protection Agency, are monitoring the air quality.

"There is a plethora of air quality monitoring that is going on constantly, and it makes me confident that the people of the area are not at elevated risk right now," he said Tuesday.

Despite such assurances, some health officials have expressed ongoing concern about the health impacts of the fire.

"I worry when officials say no health effects are expected," Winifred Hamilton, environmental health science director at the Baylor College of Medicine, told CNN affiliate KPRC-TV. "They're really talking about acute, immediate health effects, and we may still see some of those."

The tanks that were on fire contained chemicals that go into making gasoline, including xylene, naptha and pyrolysis gasoline, known as Pygas.

Sitton said that chemicals like xylene and toluene can burn in a "disgusting blob," but said there weren't toxins, but could contain particulates.

Xylene is a solvent that occurs naturally in petroleum, ITC said. Swallowing or breathing the substance can cause death, while nonlethal exposure can cause eye, nose, throat and skin irritation, among other maladies, according to the National Library of Medicine.

Naphtha is a petroleum product resulting from the distillation of natural gas or crude oil, the library says. It can be an eye and nasal irritant.

One tank that caught fire contains toluene, which is used in the production of nail polish remover, glue and paint thinner, ITC said. Toluene occurs naturally in crude oil and is used as a gasoline additive, "and damage to the central nervous system is the main concern following exposure to toluene in the air," the library says.

Amid health concerns from residents, ITC has set up a claims hotline and website for those who believe they may have suffered damage or loss from the fire.

"This isn't an event we wanted or planned," she said as her voice cracked.

She estimated that about 30% of the employees live in Deer Park.

"They're out there fighting this fire the best they can ... their family is of concern. So of course, ITC would apologize to any of them."

According to ITC, the Deer Park terminal opened in 1972 and has capacity for 2.2 million cubic meters -- more than a half billion gallons -- of storage for "all kinds of petrochemical liquids and gases, as well as fuel oil, bunker oil and distillates."

Texas Commission on Environmental Quality and Harris County have been in legal battles over spills at the facility in previous years, according to court documents.