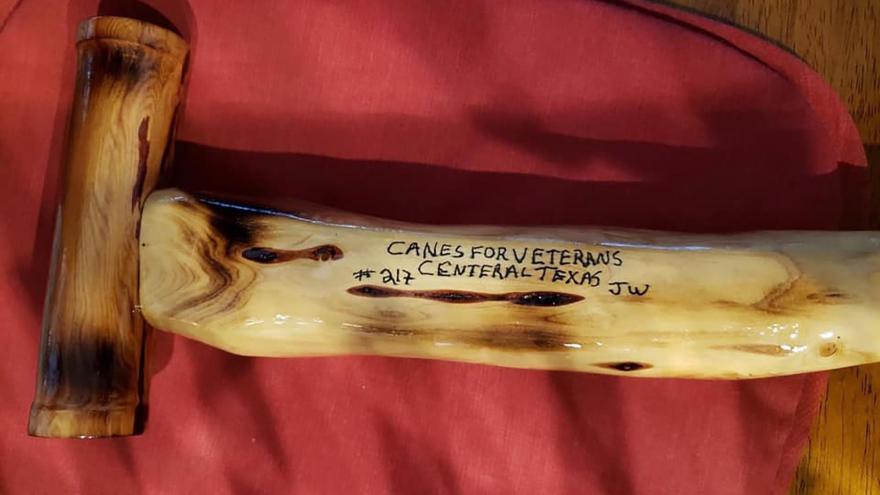 Seen is a cane made by Canes for Veterans Central Texas, a branch of the Florida-based non-profit Free Canes For Veterans.

(CNN) -- A man in Texas is designing canes for veterans, and he's asking you to donate your Christmas tree to help him do it.

US Army veteran Jamie Willis started Canes for Veterans Central Texas in 2016 when he realized he wasn't the only veteran who needed a cane that was safe, sturdy "and not just ugly."

After serving in the Army for eight years, Willis was left a 100 percent disabled veteran completely unable to work.

"I do this so I don't sit home all day feeling sorry for myself," Willis told CNN. "This is all out of kindness. I do everything out of pocket and from donations."

When the cane he was given by the Veterans Affairs had no style, kept collapsing and wasn't what he deemed trustworthy, Willis turned to a Florida organization called Free Canes for Veterans which was giving out 500 canes.

After he was told that they had no more canes, Oscar Morris, the man behind the organization, instead taught Willis how to make his own.

"When I successfully sat down and made my very first cane, I asked him if I could branch it off and start Cane for Veterans in Central Texas and he said he would love for me to do that," Willis said.

Since then, the 50-year-old has made and delivered more than 200 canes to veterans who live all over the world.

The man behind the canes

Morris, the 54-year-old US Army veteran behind the original idea, said Willis was the fifth veteran he knows to start their own branch of Free Canes for Veterans.

"It would be a blessing to get the word out for more veterans to do this," Morris said "Each of these veterans were on my original list of 500 in 2015. It was the act of kindness and a piece of wood that was their inspiration."

This is the second year Willis has asked for tree donations, but he says he has been overwhelmed with the support this year.

"It's been an outpouring of donations this year, more than I ever thought I would get," Willis told CNN. "Home Depot flooded me with trees, they're sending me 400, and the rest of the community will be giving me about another 100 trees."

Each tree is the equivalent of about one cane, which takes Willis an entire day to make, package, and ship to the veteran who will use it. While he sometimes asks them to cover shipping, Willis covers all costs from out of his own pockets as well as donations, and pays for shipping if the veteran can't afford it.

"One day, grab a cane and walk with it," Morris said. "You will feel broken because others will see you as broken. We make our canes for veterans to look 'cool' while giving honor for their service."

For those who cannot donate trees without limbs, Willis always welcomes other donations, especially sandpaper and tools.