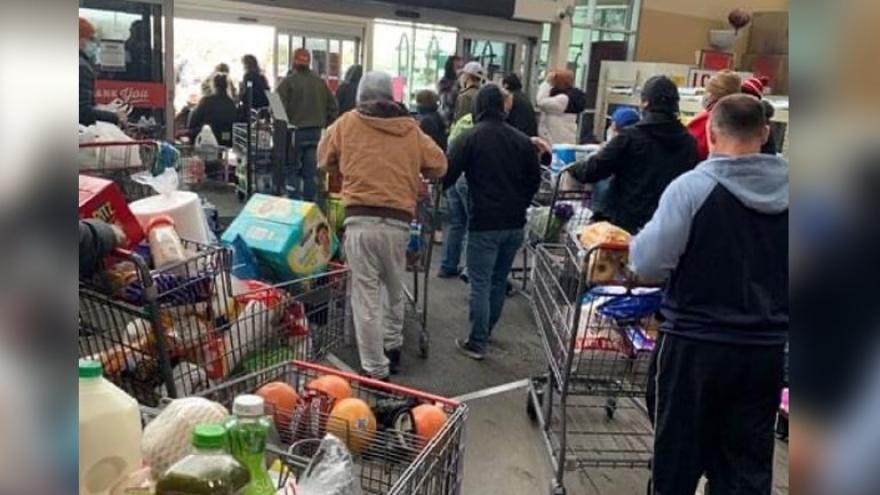 H-E-B explains to CNN their efforts to support Texas communities recovering from the winter storm, which includes a $1 million donation to Feeding Texas and a campaign in which H-E-B customers can donate online to support food banks.

(CNN) -- When Tim and Deb Hennessy decided to go on a grocery run during last month's deadly winter storm in Texas, they had no idea the generosity they were in for.

Tim Hennessy told CNN he immediately regretted the trip when he saw the line of people outside, waiting to get into the Leander H-E-B Plus. But the couple wanted to be prepared in case conditions worsened.

The Hennessys shopped for about 15 minutes before the store lost power and the lights went out. He described hearing a collective groan.

Customers continued shopping for items they needed until a store manager asked them to head to the front, Hennessy said. He and his wife joined what he estimated to be a couple hundred people in a slow-moving checkout line.

"I honestly expected halfway in there that they're gonna say, 'Hey folks, leave your carts, we'll put the stuff away. Sorry for the inconvenience, but we have no way of registering this stuff,'" he told CNN.

Instead, Hennessy said the cashier waved them through the checkout lane, saying there wasn't time to bag anything.

He assumed the store would take his contact information for payment later. Yet, when he and his wife inquired about paying, he said the cashier just motioned them towards the door wishing them safe travels home.

"(I saw) all these people going out with carts, no bags ... and it kind of hit us. Wow! They're letting everybody leave without asking who they are, how much money do you have, nothing," Hennessy said.

Hennessy turned to his wife and saw her eyes tearing up.

"What a gesture in a moment with all these people. It's been a tough year for a lot of people with the Covid stuff. And then you got this storm where people's power's out. It was just a nice gesture for a company," he said.

That's when Deb Hennessy took a photo of customers with full carts waiting to exit the store.

Touched by the unexpected act of generosity they experienced, many customers decided to pay it forward as they left the store. Out in the parking lot, customers helped each other maneuver stuck carts and load unbagged groceries into strangers' cars.

"This older woman looked like she was in a (panic) and she couldn't get her car moving with the ice," Hennessy said. "She looked a little bit distraught, so I knocked on her window and three or four of us guys actually pushed her and got her moving."

Another gentleman had diapers falling out of his cart and his car was across the parking lot; Hennessy was able to help him get to his car.

On the ride home, the couple reflected on their experience.

"We just talked about, 'wow, what did we just witness?' We both said, 'isn't this funny how we almost regretted going there initially' ... (and) 'oh this is gonna take an hour or longer to check out. Do we (need) the stuff we got, did we really have to get it today?'"

That night, Hennessy shared his experience on Facebook, hoping to spread some encouragement to his online circle of friends. He posted the photo Deb took along with his account of the shopping trip.

When he woke up the next morning, Hennessy was shocked to see his post had gone viral.

"I literally wrote my feelings that night for a couple hundred of my friends who may comment on it and say, 'Hey man, neat story,'" he told CNN.

Hennessy titled his post "The Heart of America," he said, because he and his wife felt it captured the humanity they experienced from a large grocery chain that had no obligation to give away products, even in a statewide emergency.

To show their gratitude for what he describes as a miracle, Hennessy says he called the H-E-B corporate number and asked for charities the company might like him to donate to. He and his wife donated what they would have spent on groceries to a local food pantry and a faith-based retreat center, he said.

"We wrote a check for both of them right away."

H-E-B detailed for CNN their efforts to support Texas communities recovering from the winter storm -- including a $1 million donation to Feeding Texas and a campaign in which H-E-B customers can donate online or in stores to support Texas food banks.

Days after his initial post went viral, Hennessy wrote on Facebook that he hopes the spirit of generosity continues to spread.

"We will rightfully fade from the scene as quickly as we came in with this story," Hennessy wrote, "but hopefully with this genuine act of kindness by H-E-B and thousands just like this across this country that happens each and every single day, America is reminded why God put us all here."