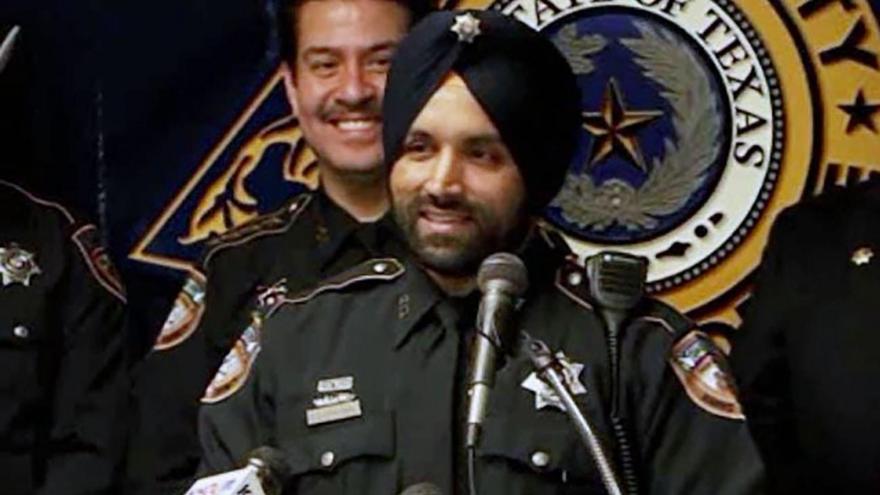 Harris County Deputy Sandeep Dhaliwal was shot "from behind... at least a couple of times" while conducting a traffic stop, officials said.

(CNN) -- The first Sikh to become a deputy at a Houston-area sheriff's department was fatally shot in the head from behind Friday, authorities said.

Sandeep Dhaliwal, who was described as a trailblazer who paved the way for other Sikhs to join the department, was conducting a traffic stop when he was shot, Harris County Sheriff Ed Gonzalez said at a press conference.

"He wore the turban, he represented his community with integrity, respect and pride and he was respected by all," Gonzalez said.

As Dhaliwal was headed back to his patrol car during the traffic stop, Gonzalez said a man got out of the vehicle with a pistol.

"In a cold-blooded manner, ambush style, (he) shot Deputy Dhaliwal from behind," Gonzalez said.

Robert Solis, 47, has been charged with capital murder in connection with Dhaliwal's murder, the sheriff's office said via Twitter on Friday night.

A weapon was recovered that deputies believe was used to kill Dhaliwal, Gonzalez said.

"It's the worst day, the worst nightmare for any police executive," Gonzalez said.

Houston Mayor Sylvester Turner tweeted a statement Friday night saying Dhaliwal "represented the diversity and inclusiveness of our community and everything that is good."

Texas Gov. Greg Abbott released a statement Friday saying "this tragic loss is a grave reminder of the risks that our law enforcement officers face every single day."

"I thank the officers who bravely responded to apprehend the suspect, and I assure you that the state of Texas is committed to bringing this killer to justice," Abbott said.

The video shows Dhaliwal speaking with the driver with "no combat, no arguing," Lee said. The driver's door was open at one point as the deputy and driver were talking, Lee said.

Dhaliwal shut the driver's door, as the driver remained in the vehicle, Lee said. As Dhaliwal turned to walk back to his patrol car, the driver's side door opened and a man could be seen exiting the vehicle "almost immediately running with a gun already out," Lee said.

The dashcam captured the fatal moment Dhaliwal was shot from behind. He was shot in the back of the head, Lee said.

The shooter returned to his vehicle and drove away, Lee said. A nearby resident saw the shooting and rushed to help the deputy, Lee said.

Lee told KTRK the dashcam caught an image of the shooter.

The shooter, described as a Hispanic male, was found at a business less than a mile away from where the shooting took place, Lee said. A woman, who deputies said was also in the vehicle, was also taken into custody, Lee said.

Dhaliwal was a trailblazer

Dhaliwal was a 10-year veteran who is survived by his wife and three children.

In 2015, the Harris County Sheriff's Office made an official policy that allowed Dhaliwal to wear his beard and turban on duty, according to CNN affiliate KTRK-TV.

"As a Sikh American, I felt the need to represent the Sikh community in law enforcement," Dhaliwal said at the time. "It will give me the chance to open up the conversation."

Prior to becoming a deputy, Garcia said Dhaliwal was an entrepreneur with a trucking business.

"When he knew that the Harris County Sheriff's Office needed someone like him to build bridges between the Sikh community and the sheriff's office because of a mishap that had happened prior.

Dhaliwal looked to his father and asked for permission," Garcia said, adding that Dhaliwal sold his business to take lower pay as a detention officer and worked his way up to be a deputy.

Because of Dhaliwal, Garcia and Gonzalez said there are other Sikh deputies now.

"There's simply no words to adequately express our heartbreak, our sadness at this time," Gonzalez said.

Sikhism is the world's fifth most popular religion. It is a monotheistic faith that believes in equality and service to others.

There are 25 million Sikhs around the world and about 500,000 in the US, according to the The Sikh Coalition.