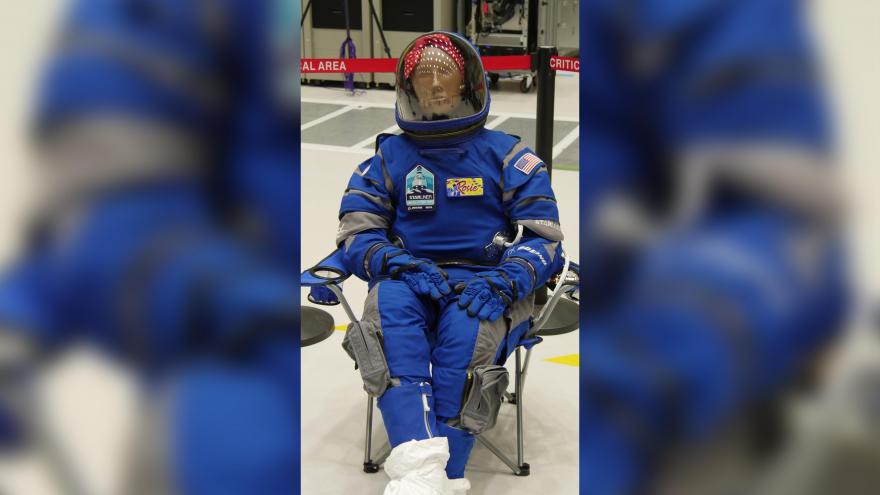 (CNN) -- Rosie the Riveter has inspired generations of women and now a test dummy named after her is breaking new barriers.

Wearing a red bandanna and a blue spacesuit, Rosie the Rocketeer is the first official passenger to ride Boeing's CST-100 Starliner spacecraft to the stars. The spacecraft is designed to carry astronauts to the International Space Station. Rosie will be heading there on a test flight Friday.

The unmanned flight test is a big step toward humans one day being able to ride to space and back in the Starliner. Rosie will be connected to dozens of sensors that will read how she responds to G-forces during launch, ascent, reentry and landing, according to Boeing. She will be sitting in the commander's seat and will be on the mission solo.

"Rosie is a symbol of not only the women who are blazing a trail in human spaceflight history, but also of everyone who has shown grit and determination while working tirelessly to ensure the Starliner can transport astronauts safely to and from the International Space Station," Leanne Caret, CEO and president of Boeing Defense, Space & Security, said in a statement.

"She's flying for everyone on our team who took on the challenge of human spaceflight and said, 'We can do it,'" she said.

Rosie the Rocketeer met the women on the Boeing factory floor in late October, where they gave her a signature red bandanna. More than a dozen women flexed their biceps and surrounded Rosie to celebrate the upcoming mission.

"To the women of Starliner, my headscarf is red. My spacesuit is Boeing blue. I'm on the verge of making human spaceflight history, just like you," Regan said in a video.

"I see how hard you're working on the final push before launch through weekends and holidays, and even at night. So please put on your own headscarf and let's show the world we can do it as you get me and my spacecraft ready for orbital flight," she read.

Caret named the test dummy after "Rosie the Riveter," a cultural icon dating back to World War II. The cartoon female factory worker flexes her bicep in the famous poster urging women to join the war effort, saying "We Can Do It!"

Women were called to factories, armaments and shipyards to replace the men who joined the military during WWII. Women joined the workforce in droves, many of them building war supplies and weapons.

The woman believed to be the "real" Rosie the Riveter was named Naomi Parker Fraley. She was a factory worker at Alameda Naval Station in California during WWII.

Women have a long history of working at Boeing, such as the first seamstress it hired in 1916. Her name was also Rosie. Rosie Farrar sewed wings for early seaplanes, Boeing said.

During World War I, 25% of Boeing's workforce was made up of women. And during the height of WWII, women made up almost half of the Boeing workforce. The Boeing women helped the company make 12 B-17 Flying Fortress bombers a day, Boeing said.

These days, women are breaking the glass ceiling when it comes to going to space.

NASA astronaut Nicole Mann is training for the Boeing Starliner's first crewed test flight. She will be the first female to pilot a new spacecraft, according to Boeing.

NASA asked the private sector to develop spacecraft that could carry humans to replace the space shuttle program after it was retired in 2011. SpaceX was allotted $2.6 billion and Boeing was awarded $4.2 billion in 2014. NASA originally predicted both companies' spacecraft would be up and running by 2017, but both vehicles are behind schedule.