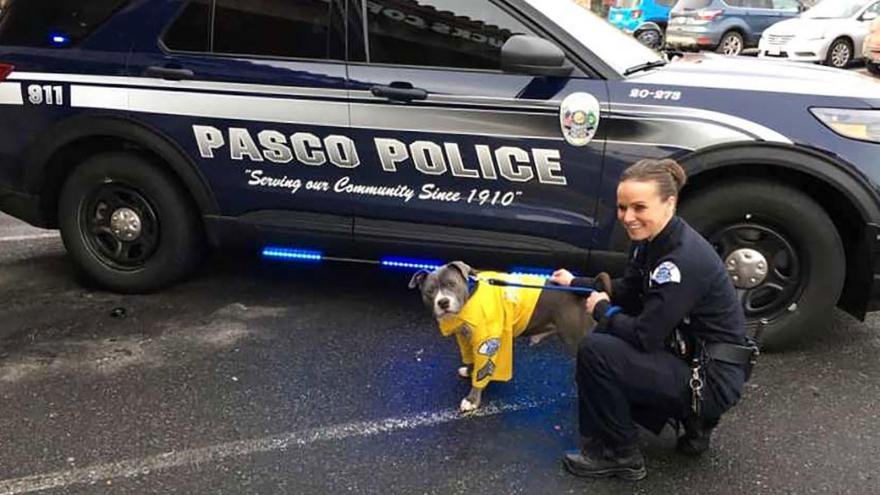 Police in Pasco, Washington, turned a rescue pup with an inoperable tumor into a dashing police K9.

(CNN) -- Police in Pasco, Washington, turned a rescue pup with an inoperable tumor into a dashing police K-9.

The dog, Eddie, was abandoned and spent almost a month wandering in nearby Benton City before he was rescued.

Carin Brown, the Benton County animal control officer who caught Eddie, told CNN sister network HLN they had initially received a call about him in October 2019, but they were unable to capture the pooch. They finally caught him in late November.

"We thought he had been hit by a car," she said Wednesday. "We rushed him to the vet and we discovered that he, unfortunately, had cancer."

The inoperable tumor caused Eddie to be blind in one eye, and he was given six to 12 months to live.

"He's just the best dog, so friendly, so well-behaved, he knows all of his commands, he's just the sweetest thing," Brown said. "He deserves six months to a year of all the love and happiness that we can give him."

Kesler created a bucket list, which included becoming a police K-9, to make sure the dog she lovingly calls "Eddie Spaghetti" will have the most memorable final months as possible.

"I thought maybe he might get his picture taken with an officer in a car, I thought maybe if he were lucky, he might go for a car ride, but I never dreamed it would be this big for him," Kesler told CNN affiliate KEPR.

Eddie got a custom-made uniform with real police patches and was sworn in as a police K-9 before spending the day on patrol, promising to "apprehend bad guys, search out narcotics and put people in jail."

"We believe in helping people and that also means helping animals in our community, so we have all come together as a family and are all fighting alongside Eddie," Pasco police Detective Julie Lee told KEPR.

Officer Lee and others took Eddie to several locations around town. His first official call was to a local auto body shop for "service to pick up property," where he received a gift basket with treats, food, and toys to take home. They even donated to his veterinarian bills.

One stop, of course, was a local doughnut shop, because Eddie wouldn't be a real police officer without some coffee and doughnuts.

"He is just such a lover. You would never suspect that he was abused or neglected," Detective Lee said.

Some community members offered to check other items off his list, such as pictures with Santa and a pool filled with stuffed animals, CNN affiliate KAPP reported. Kesler still hopes he can ride in a motorcycle side car and be the star of a kissing booth at an adoption event.

"These people who've really stepped up and said we want to make a difference in this dog's life -- it's meant the world to know that people still do care," Kesler told KAPP. "Having them and being able to be a part of their lives and make a difference like in Eddie, to bring this joy to him no matter how short of time it is that's what we hold onto."

Officer Brown told HLN she was jolted by the outpouring of support for Eddie in his final days.

"It's amazing ... in this little tiny community that so many people have said, you know, 'He's worth it, he's worth the chance,'" she said.

Brown hopes that in the future when people see other animals like this, they are willing to step up and keep them safe.

And there's good news for Eddie's bucket list item to ride in a motorcycle side car -- Brown has a friend who owns one.

CNN reached out to Mikey's Chance but has not yet heard back.