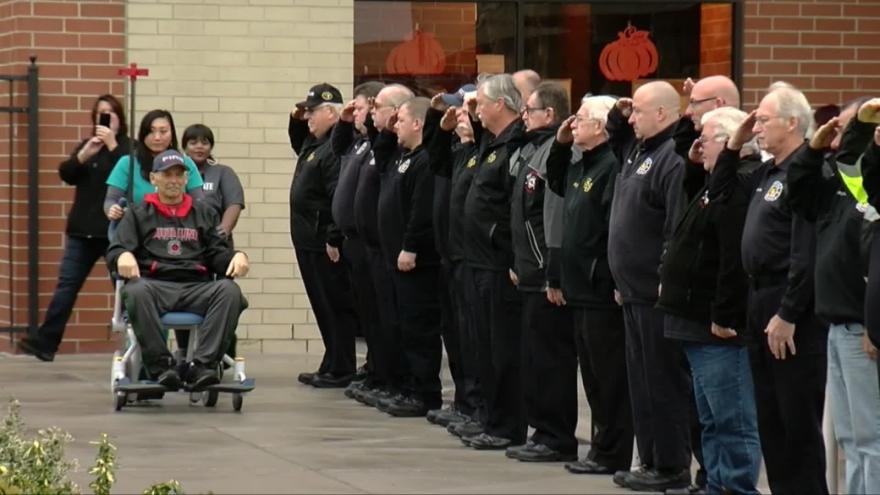 (CNN) -- Firefighters in a New York town gave one of their own a collective and poignant salute Tuesday as he took his last ride on the fire truck home.

Gus Buczek, a 62-year-old firefighter and Marine veteran suffering from terminal pancreatic cancer, was transferred from a cancer center into at-home hospice care.

Members of the South Line Fire Company, a volunteer fire department in Cheektowaga, New York, a suburb of Buffalo, lined up outside the Roswell Park Comprehensive Cancer Center as Buczek was being discharged.

After firefighters had an chance to hug Buczek and say a few words to him, they gave him a seat of honor in the captain's chair in the fire truck for his last ride.

"It was a high honor to bring him home," said Tim Kopp, the department's chaplain, told CNN,

A fixture of the company

The noticeably thinner Buczek being wheeled out of the hospital was a stark contrast to the strapping Marine veteran who joined the volunteer fire company seven years ago.

Buczek had immediately turned heads when he opted to enter a two-week crash course in firefighting, rather than to take a less rigorous course that met weekly, Kopp said.

"He had kept in shape," Kopp said.

Buczek caught the attention of CNN affiliate WKBW, who told the story of the then-54-year-old easily outpacing other recruits decades younger than him.

"He's the one guy you can call on to help you with anything," South Line's assistant chief Michael Altenburg told WKBW before choking up.

"Especially for someone who's been so active in the company, it's a terrific loss," Kopp said. "He was always there."

'It's the hardest thing I've had to do'

Seven years ago, Buczek told WKBW that his bonds with his fellow firefighters were tight.

The words find an even deeper resonance today.

"People don't realize that when you become a volunteer firefighter, you take on a second family," Kopp said. "It's no different than losing one of your close relatives."

Kopp said he's having a tough time picturing the fire hall without his friend there.

"This has been the hardest thing for me to do as chaplain," Kopp said. "It's not what I looked forward to when I took the position."