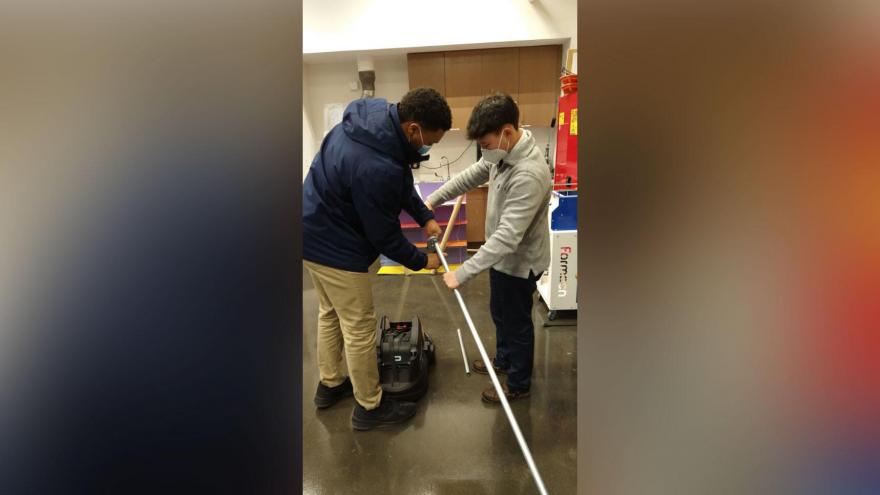 (CNN) -- For many parents, taking their babies on a walk or cradling them to sleep is a blessing that's easy to take for granted. But for Jeremy King, it's something he feared he would never be able to do.

That was until a group of high school students in Maryland designed and built a wheelchair stroller attachment so that people with disabilities could walk their babies.

The idea was born when students at Bullis School, a private K-12 school in Potomac, discovered that one of their teachers was expecting a baby, and her husband, who had impaired mobility, may never be able to walk his own child.

In 2017, Chelsie King, a 32-year-old middle-school theater teacher at Bullis, had been engaged to her now-husband Jeremy King, 37, for only three months before they discovered he had a brain tumor. That October, he underwent an eight-hour surgery to remove it, and was left with a number of challenges, including an inability to balance. He was a nurse anesthetist who had traveled to Africa for medical missions before the surgery.

Three years later, when Jeremy discovered they were going to have a baby, he couldn't contain his excitement -- followed by constant worries of how he would be able to help parent, or even take part in the joy of taking his baby for a walk.

"It was an immediate concern," Jeremy said in a statement. "I was very concerned with the safety of myself and our child especially with Chelsie having to potentially support both of us. It played on my mind constantly which is why it was important for us to find things to help."

So Chelsie reached out to Matt Zigler, a fellow educator who runs the BITlab, the school's creative lab, and teaches a course called "Making for Social Good."

"We knew we were expecting in March and I asked him if he thought he could build something for us as a personal favor and he had the idea to throw this to his Making For Social Good class and I thought that was an amazing idea," Chelsie said in a statement.

Zigler's students immediately began working on the project, which they called the "WheeStroll." They hoped to create something that could not only change Jeremy's life, but the lives of millions of other people living with similar challenges.

A project driven by empathy

Since the baby was expected to be born in early March and the students began their project late November, they had about three months to come up with an idea and successfully execute it.

Jacob Zlotnitsky, 18, was one of the 10 students in Zigler's class who dedicated his winter semester to creating the WheeStroll. For Zlotnitsky, the project was more than a class assignment -- for that portion of his senior year, it was his purpose.

Zlotnitsky and his classmates began by brainstorming various ways to transform the wheelchair into a device that could either accommodate a baby carrier or stroller.

The project began with more questions than ideas: Does Jeremy live in an area with sidewalks? What kind of terrain does he use his wheelchair on? Were there ramps to help him move around? What kind of weather would he be taking the baby out in?

"The hardest part of the project was putting ourselves in the shoes of a person with physical disabilities," Zlotnitsky, who is now heading to Boston University, told CNN. "To achieve a successful project we had to use empathy and really make sure we were thinking about everything a person with Mr. King's disabilities would be forced to consider."

After interviewing the expecting couple, the students learned that their device would have to meet three design requirements: It had to be safe, easy to maneuver, and something Jeremy would be able to attach and detach without help from anyone else.

The device was tested with Jeremy before the baby was born, and the students continued to add more safety features and small adjustments.

The WheeStroll Wheelchair Stroller Adapter is meant to be used once the baby gets older and can no longer fit in a car seat, according to Zigler.

"We wanted to make sure as the kids age out of the first solution, the parents would have a second solution they could use at that point," he said.

Appreciating the simple things in life

Phoenix King was born on March 4. By then, the WheeStroll was just days away from being perfected.

"It was really emotional for us to see it completed," Chelsie said. "Our son was a week old when Matt delivered the final product to us and to know that we would be able to use it so soon after our son was born is just a really lovely thought."

Soon enough, Jeremy was able to walk Phoenix from the safety and comfort of his wheelchair -- something he feared he would never be able to do.

"It was a very emotional experience because I never thought I would be able to do something safely like taking a walk with my child," Jeremy said. "It has allowed me to experience things that I would not have been able to do before having the WheeStroll. It allows us as a family to have more freedom of movement."

While the Kings say it can be easy as parents to let the simple blessings in life go unrecognized, they couldn't be more grateful for every moment they share with their baby.

"It has given us the ability to do something simple like take a walk as a family. Something that a lot of families don't have to think twice about," Chelsie said.

"This surgery changed our lives drastically and we have worked very hard to accept, learn and overcome those challenges but parenting is a whole new set of challenges. Anything that can help Jeremy feel confident as a parent is priceless to me."

Due to the coronavirus pandemic, the students were unable to meet Jeremy and see him use their device in person. Instead, Chelsie sent videos of Jeremy using the WheeStroll to the high schoolers. Zigler said they were "so happy and proud" to see the change they were able to make.

"It was such a heartwarming moment," Zlotnitsky said. "It felt so great to see it and to know I changed a life and made a family's life a little bit better through something I built. It's crazy to think that's a reality."

Sharing their invention with the world

One of the most important parts of the project, Zigler says, was making sure it was simple and affordable enough to allow other families with disabilities to recreate it for their own use.

"We wanted to come up with a design that would be easily repeatable for other people with access to basic tools," Zigler said.

The final design for the WheeStroll Wheelchair Stroller Attachment, which attaches a car seat to a wheelchair, requires simple tools -- totaling up to less than $100 -- and an easy design the class has shared online so anyone who needs it can access it.

The design comes with instructions, a material list, and even a video and photos showing the step-by-step process.

"I'm so happy to help at least one family and if we can help more by sharing our design it would be really incredible." Zlotnitsky said.

The WheeStroll Wheelchair Stroller Adapter, which is to be used with a stroller once the baby grows up, is a little bit more complicated since it requires a 3D printer, but is still easily created by anyone with access to one.

Zigler says they plan to upload the design and instruction list once they finish testing their options with Jeremy and perfect their final product.

Until then, the high school teacher will continue using his class to help young people recognize their talent and use it to change peoples' lives for the better.

"My class helps kids gain a recognition that even though they're students, they can come up with ideas and have access to tools and resources to make a different in the world," Zigler said. "It's very empowering for students to know they don't have to wait four years of college before they can get out into the world and help people."

The team won two international awards by the Make:able 3D Printing Challenge for their wheelchair project, including "Best Inspirational Story" and "Best Showcase of Iterative Design."

"It made me realize what's important in life, and part of that is benefiting our communities and being able to empathize with others," Zlotnitsky said. "I feel fortunate to have been able to take a class that has allowed me to make a difference in people's lives."