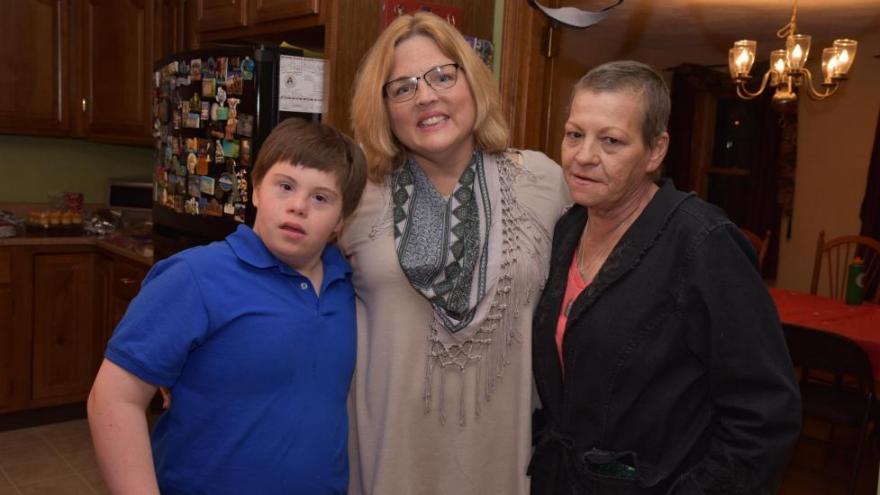 A Massachusetts teacher and her family are making sure that one of her former students has a loving home after his mom died from breast cancer.

(CNN) -- A Massachusetts teacher and her family are making sure that one of her former students has a loving home after his mom died from breast cancer.

Jake Manning, 14, has Down syndrome and met Kerry Bremer four years ago when she was his special education teacher.

Bremer said that Jake was a "dynamic" boy and that she was instantly drawn to him.

She also knew that his mom, Jean Manning, was sick with terminal cancer that had metastasized in her brain. Manning was a single mom and her family wasn't going to be able to take Jake in.

So Bremer talked with her husband and children, and they decided to help.

"I called her and I said, 'I could really be overstepping the boundaries here, but I just want to let you know that if you need a backup plan for Jake, my family and I are willing to offer guardianship,'" Bremer said. "And she said, 'I am going to sleep better tonight than I have in a long time.'"

Last week, Manning put her son on the bus in the morning, and died before he got home from school.

"I'm terribly sad that Jake ... doesn't have his mom to be with him for the rest of his life," Bremer told CNN. "But I'm very, very grateful that she trusted us to take him and be with him and share our home with him."

'Part of our family'

Bremer said Jake spent more time with them over the past three years so that they could get to know each other.

"As the years passed, it just steadily increased and he became very much a part of our family," Bremer said.

Manning shared Jake with them and called him "our boy," Bremer said. But "Jean was his mother. Jean was the decision-maker."

Her death was a shock, but Jake is handling it really well, Bremer said.

"He says she's in heaven with God and with his aunts. He knows that he won't see her again. He knows that his new home is with us," she said. "He calls her his Queen Angel Mom."

Bremer said Jake's mom is the hero of the story for doing everything she could to make sure her son would be taken care of.

'You can't help but love him'

When Bremer met Jake in her classroom, she says she knew he was special.

He often jumped around the room pretending to be Batman. He was full of energy, she said.

"And then the next minute he would be the sweetest little guy, who was looking you directly in the eyes and telling you he loved you," Bremer said. "You can't help but love him."

She said Jake is smart, funny and a very loving child.

"He didn't talk that much, but when he did talk and say something you were like, 'Oh my gosh, you know that? How do you know all of this?'" she said.

People are rallying to help him

Bremer and her husband were named Jake's legal guardians in May and she says they would adopt him in a heartbeat, if that's the best thing for him.

A GoFundMe account set up to support Jake has raised almost $30,000 in four days.

Bremer said her family adores Jake and that helping him was "a no-brainer" for them. She's surprised by all the attention they've gotten.

"This child needed a place to be, and I can't believe that it's making such an impact," she said.