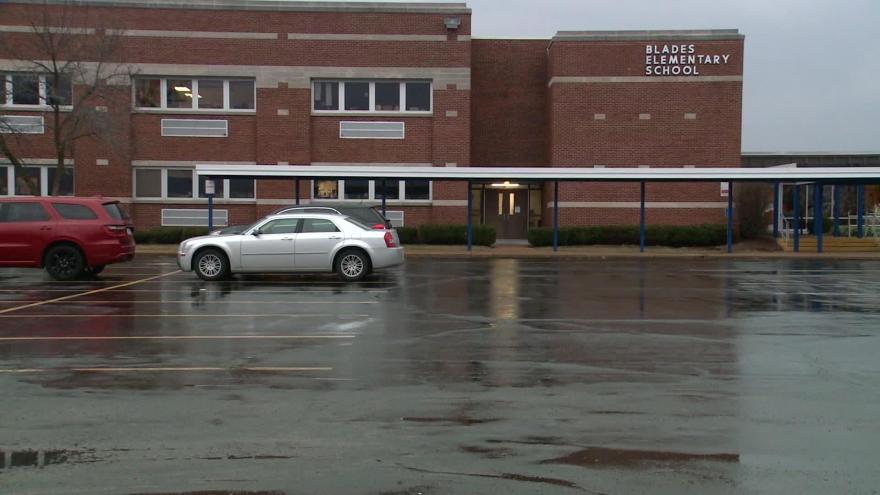 A teacher at Blades Elementary School in Oakville, Missouri, is on administrative leave after asking students to "set a price for a slave" as part of an assignment.

(CNN) -- When Angela Walker went through her son's school folder, she was shocked to find what the fifth grader had been working on in class.

A social studies assignment from Blades Elementary School in Oakville, Missouri, had asked some students, including her biracial son, to imagine that they work in the slave trade. Then it prompted them to set a price for a slave.

"You own a plantation or farm and therefore need more workers. You begin to get involved in the slave trade industry and have slaves work on your farm. Your product to trade is slaves.

You may trade for any items you'd like," one of the questions in the exercise read.

That question was one among 12 that school Principal Jeremy Booker said "attempted to address market practices."

Other questions asked students to set a price for items such as a bushel of grain, a piece of lumber and a jug of milk. At the end of the exercise, students were asked to reflect on a free market economy and whether they'd consider themselves wealthy given the money and items they had left over.

"As part of both the Missouri Learning Standards for fifth-grade Social Studies and the fifth-grade Mehlville School District curriculum, students were learning about having goods, needing goods and obtaining goods and how that influenced early settlement in America," Booker wrote in a letter sent to families at the school on Monday.

"Some students who participated in this assignment were prompted to consider how plantation owners traded for goods and slaves."

The assignment was "culturally insensitive," Booker wrote, and he said the teacher had expressed "significant remorse."

As the Mehlville School District continues to investigate, the teacher has been placed on administrative leave, the district confirmed to CNN. Booker also wrote that he was working to train all teachers and staff at the school about "cultural bias."

"Also, I am working with district leadership to provide all Blades teachers and staff with professional development on cultural bias in the near future," he wrote.

"We are working together to ensure all students and families feel valued and respected at Blades Elementary."

"Asking a student to participate in a simulated activity that puts a price on a person is not acceptable," Gaines wrote in a statement. "Racism of any kind, even inadvertently stemming from cultural bias, is wrong and is not who we aspire to be as a school district. I am sorry and disappointed that this happened in our school."

Walker, who is a teacher herself, told CNN affiliate KMOV that there was no value in "playing a game" about slavery.

"We have to be more culturally sensitive. We do. We can say to get over homework assignments. 'It's just a homework assignment. That was 100 years ago,'" she told KMOV. "Yes, it was. But it's still someone else's family. Maybe there are people who don't see the wrong in it. We need to be talking about it."

John Bowman, president of the St. Louis County NAACP, said that educators should be more sensitive when dealing with slavery.

Bowman told KTVI that he hopes to meet with officials from the school district soon.