A taxi driver saved an elderly woman from being scammed out of $25,000 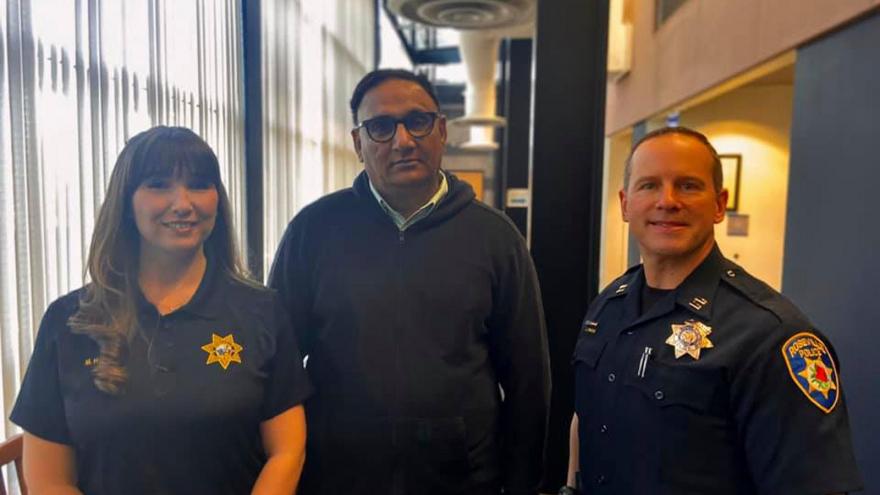 Rajbir Singh saved an elderly passenger in his cab from giving a scammer $25,000 in Roseville, California. He is flanked by Roseville Police records clerk Megan Harrigan and police Capt. Josh Simon.

(CNN) -- A California cab driver knew something sounded fishy when his elderly passenger said she needed a ride to the bank to withdraw $25,000.

Rajbir Singh picked up a 92-year-old woman in Roseville, California, two weeks ago. When he started chatting with her, Singh said she told him she was about to withdraw the money to settle a debt with the IRS.

He pleaded with the woman to reconsider, saying he thought this could be a scam. Singh even detoured to a police station to help convince his passenger not to withdraw her money.

"I am an honest guy, and these are old people. They need help," Singh, the owner of Roseville Cab, told CNN on Thursday. "It just made sense."

As Singh talked to the woman, she told him that someone had called her and asked for the money. When he asked if it was a family member, the woman grew silent.

Singh said the woman agreed to let him call the number to the person who was posing as an IRS employee.

"We called this number again and I asked the man, 'Do you know this lady?' He said no," Singh said. "I knew something was wrong."

When Singh pressed the man, saying the woman was 92 years old and she was nervous, the man hung up on him. After repeated calls back, Singh said the number blocked them.

Despite that, Singh said the woman still didn't believe him, so he came up with another idea.

"Raj pleaded with the woman to reconsider so they agreed to stop by the Roseville Police Station to ask an officer," the police department said in a post on Facebook.

Singh spoke with an officer in the station, who then spoke with the woman, police said.

The conversation with the officer worked, and the woman believed she was being scammed.

"We love this story because several times throughout, Raj could have just taken his customer to her stop and not worried about her wellbeing," Roseville police said in the Facebook post. "He took time from his day and had the great forethought to bring the almost-victim to the police station for an official response."

"His quick thinking saved a senior citizen $25,000 and for that, we greatly appreciate his efforts," police said.

Singh took his passenger home, her bank account saved. A week after the potential scam was thwarted, Singh said he got a call asking him to come back to the station.

Officers gave Singh a $50 gift card to thank him for what he did.