A suspect in the killing of Ahmaud Arbery was involved in a previous investigation of him, recused prosecutor says 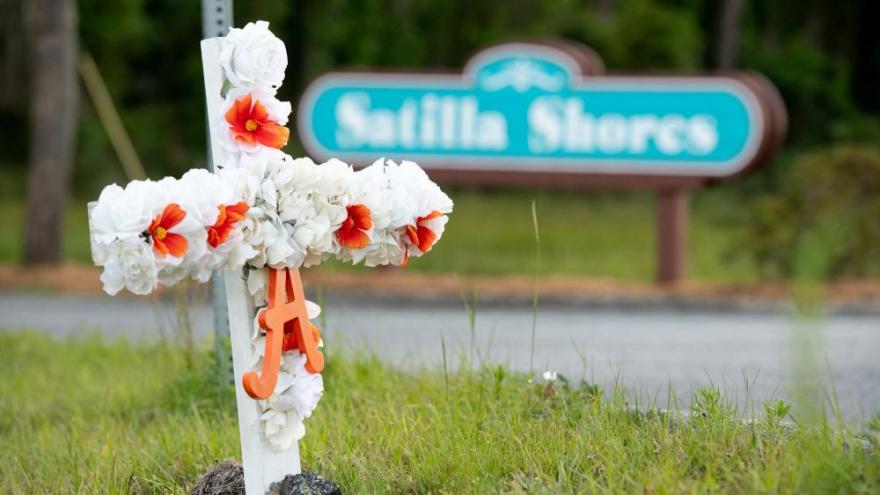 A cross with flowers and a letter "A" sits at the entrance to the Satilla Shores neighborhood where Ahmaud Arbery was shot and killed in Brunswick, Georgia.

(CNN) -- One of the men accused in the fatal shooting of Ahmaud Arbery was involved in a previous prosecution of Arbery, according to a letter written by a prosecutor who has since recused himself from the case.

Gregory McMichael, 64, and his 34-year-old son, Travis McMichael, were arrested Thursday evening and face charges or murder and aggravated assault in Arbery's killing on February 23, according to the Georgia Bureau of Investigation.

Barnhill was the second prosecutor to oversee the case after the Brunswick DA recused herself due to her office's previous connection to McMichael. Barnhill said in the letter he believed it best to recuse his office from the case given the connections between his son, McMichael and Arbery.

Barnhill's letter, sent to the office of Georgia Attorney General Chris Carr, did not specify what the prior prosecution was for or when it took place.

The Brunswick News has reported Arbery was indicted for allegedly bringing a gun to a 2013 high school basketball game when he was 19. Family attorney Lee Merritt has acknowledged Arbery's 2018 arrest on shoplifting charges. But any reference to "alleged conduct from high school or shoplifting is absurd and has nothing to do with his murder," Merritt said.

"We've been here before" whether it's Tamir Rice or Trayvon Martin," said Benjamin Crump, an attorney for Arbery's father. "When they kill our children, they then try to assassinate their character and I know they're going to do that with Ahmaud Arbery."

The case prompted outrage in recent days over the fact the McMichaels, who are white, had not been arrested more than two months after Arbery, a black man, was killed while jogging through a neighborhood outside Brunswick, Georgia.

That day, according to a police report, the McMichaels allegedly chased Arbery down in a pickup truck, believing he was a suspect in a string of burglaries.

McMichael told police his son shot Arbery after the latter allegedly attacked him as he stood in the road with a shotgun, according to the police report.

But those who knew Arbery said the former high school football player often jogged through the neighborhoods southwest of Brunswick. His loved ones described him as a "very good young man."

"His heart was always in the right place. And he just loved people," said his father, Marcus Arbery Sr., Friday on CNN's New Day, on what would have been his son's 26th birthday.

"I just want justice for my son," he said. "I just want them to pay the price for the crime they did."

"Anytime you pursue a young man, go jump in a truck with shotguns and a pistol ... and you follow him and slaughter him like that, that's lynching," he said.

CNN's attempts to reach Travis McMichael this week were unsuccessful. Gregory McMichael has declined to comment because he's under investigation.

Both men made brief court appearances via video on Friday at which the judge read the charges against them and said bond would be set at another time. It's unclear whether they are represented by attorneys.

Asked Friday why the GBI — which took over the case this week — quickly arrested the McMichaels when local authorities did not for weeks, GBI Director Vic Reynolds said he couldn't speak to the actions of other agencies.

But, he added, "I'm very comfortable in telling you that there's more than sufficient probable cause in this case for felony murder."

Gregory and Travis McMichael were arrested two days after a 36-second video that appears to show the deadly confrontation surfaced online, sparking calls for justice in the south Georgia community.

The video was released by a local radio personality on Tuesday. CNN has not verified who recorded the video — taken by someone in a vehicle that pulls up behind a pickup truck stopped in the road — but it captured events that match numerous accounts of the shooting.

The footage begins with Arbery jogging down the middle of a street toward a pickup truck stopped in the road. Gregory McMichael is in the bed of the truck, while his son is standing near the driver's side door.

Arbery approaches and he and Travis McMichael begin tussling.

A shot goes off, and the two disappear off the left side of the screen as Arbery appears to throw a punch. Gregory McMichael takes out a handgun but doesn't fire.

A second shot is heard as the men are struggling off-camera. As they come back into view, both are still grappling with the shotgun. Arbery appears to throw a right-handed punch at Travis McMichael's head as a third gunshot is heard.

Blood appears on Arbery's T-shirt below his left ribcage. He stumbles and falls in the middle of the two-lane road.

Reynolds on Friday said the footage was a "very important piece of evidence."

Asked about whether there will be additional arrests, Reynolds told reporters the investigation is still active.

"We investigate everybody involved in the case," he said, "including the individual who shot the video."

"I will say that looks like a really good young guy," Trump said of Arbery. "It's a very disturbing situation to me and my heart goes out to the parents and the family and the friends, but yet we have to take it, law enforcement is going to take a look at it."

The third and current prosecutor, Tom Durden of the Atlantic Judicial Circuit, said this week he would present evidence to a grand jury once coronavirus restrictions were lifted.

The GBI took over the case Tuesday night at Durden's request, by which point outrage had reached a fever pitch.

A wide swath of politicians, activists and celebrities have weighed in on the incident in recent days, including Georgia Gov. Brian Kemp, who called the footage "absolutely horrific" and said Georgians "deserve answers."

The Arbery case initially landed on the desk of Brunswick Judicial Circuit District Attorney Jackie Johnson, who recused herself because Gregory McMichael had worked for the office. The case then went to Barnhill.

In a statement released Thursday, state Attorney General Chris Carr's office said it was not aware of the connection when it appointed Barnhill to the case, writing, "it has become clear to our office that the appointment should not have been accepted, and it is appropriate that he is no longer involved in the case."

But before Barnhill's recusal, he wrote a separate letter to police saying he believed Gregory and Travis McMichael were within their rights to make a citizen's arrest of Arbery at the time of the shooting.

"It appears their intent was to stop and hold this criminal suspect until law enforcement arrived. Under Georgia law, this is perfectly legal," Barnhill wrote in an April 2 letter.

He went on to question whether Arbery could have been responsible for the gunshots by pulling on the shotgun and wrote Travis McMichael "was allowed to use deadly force to protect himself."

While Gregory McMichael claimed Arbery looked like a suspect in a string of recent burglaries, Glynn County Police Lt. Cheri Bashlor told CNN this week just one automobile burglary in the neighborhood was reported when a 9 mm pistol was stolen January 1 from an unlocked truck outside the McMichaels' home.

The owner of a home under construction near the scene of Arbery's February 23 shooting, listed as a victim in the police report, said his surveillance system captured a man who appeared to be Arbery "coming onto his property" on that day.

The homeowner, who declined to share the clips with CNN, said there were previous videos on other occasions showing a man entering the property and stealing fishing tackle but he could not identify the man and he did not file a police report.

Police have yet to clarify whether Arbery is accused of any crime at the unfinished home.

Arbery family attorney S. Lee Merritt said Arbery did nothing that would warrant a citizen's arrest. If Arbery went by a house under construction, Merritt said Thursday, it was, at most, trespassing.