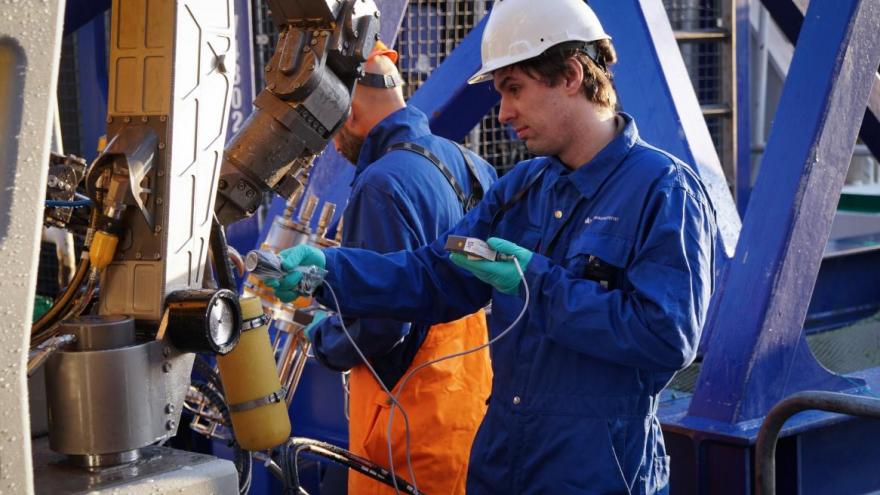 (CNN) -- A sunken Soviet nuclear submarine that's been on the sea floor for three decades is leaking an abnormally high amount of radiation, according to the Institute for Marine Research. The institute says the leak poses no risk to people or fish.

The researchers took water samples near a ventilation duct on the Cold War-era sub. They contained up to 800,000 times the normal amount of the element caesium, a metal that can be radioactive.

"The levels we detected were clearly above what is normal in the oceans, but they weren't alarmingly high," expedition leader Hilde Elise Heldal said in a media release.

The scientists used a remote-operated vehicle called the Ægir 6000 to survey the wreck, which sits about a mile below the water surface.

Researchers have been monitoring the wreck for decades

After a fire in its engine room, the Komsomolets sank in April 1989, coming to rest on the sea floor about 135 miles southwest of Norway's Bear Island.

Researchers have been monitoring the submarine since the 1990s, and have seen these types of radiation leaks from the sub's ventilation duct before. But the most recent pictures of Komsomolets, taken in 2007, are twelve years old.

"Over the past few days we have also taken samples a few meters above the duct," Justin Gwynn, a researcher at the Norwegian Radiation and Nuclear Safety Authority said. "We didn't find any measurable levels of radioactive caesium there, unlike in the duct itself."

They're investigating a milky cloud

With the addition of a live video feed to their work, the scientists can gain new insights. They noticed a white-ish cloud rising up from the duct where they saw the high radiation levels.

They'll keep monitoring the wreck of the Komsomolets. But they say there doesn't seem to be any danger for the time being, because the radiation hasn't cracked unsafe levels, the pollution is quickly diluted within the seawater, and there aren't many fish that deep for fishermen to catch.

"We need good documentation of pollution levels in seawater, seabed sediments and, of course, fish and seafood," Heldal said. "So we'll continue monitoring both Komsomolets in particular and Norwegian waters in general."