A strong storm and at least one tornado struck the Chicago suburbs. The line of storms now moves east 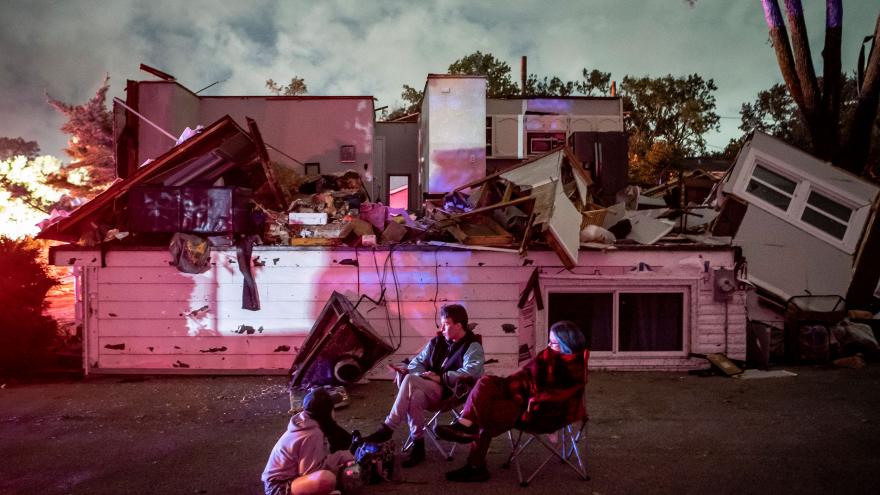 (CNN) -- A massive storm and at least one tornado ripped through the Chicago suburbs late Sunday night, injuring at least five people and damaging more than 100 homes.

The line of severe storms will continue to track east Monday, with the strongest storms expected in late afternoon and evening from southern Ohio and West Virginia to Maine. The slight risk of severe storms in this area extends east to Washington, DC, Baltimore and Pittsburgh.

Some 30 miles west of Chicago, about 130 homes in Naperville, Illinois, were damaged late Sunday and about 10 families were displaced, city Fire Chief Mark Puknaitis said.

When fire crews arrived, they found one home leveled and a couple of other houses with severe damage, Puknaitis said during an early morning news briefing at the scene.

"There were people that were trapped in the house that was really leveled by the wind damage," Puknaitis said.

Fire crews quickly rescued the three trapped residents. One is in critical condition and two others are noncritical, according to the chief.

"It all happened so fast, I can't even tell you," Naperville resident Dennis Wenzel said. "I just heard the loudest roar of wind come in and the house, the pressure, just kind of like moved the windows and everything."

In Woodridge, about six miles to the west, there were no reports of significant injuries after a tornado touched down, city police said in a news release posted on Twitter.

The Sunday night storm could end up being "the first strong tornado (EF-2+) in the metro counties since 2015," the National Weather Service in Chicago tweeted.

"We have enough evidence on radar, damage reports, and storm spotter reports to say we've had a tornado in at least part of that area if not all those communities," NWS Chicago said.

The National Weather Service had issued a tornado warning around 11:43 p.m. ET, shortly before the storms passed through the Naperville area.