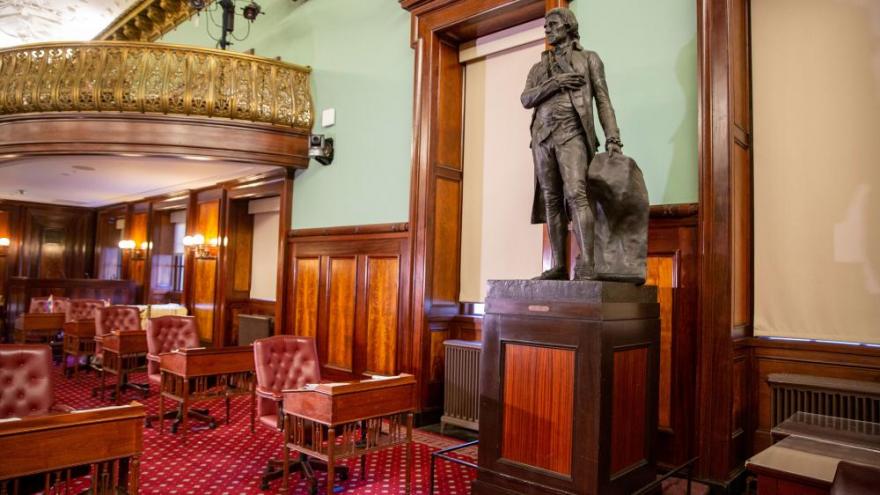 The statue, which is a plaster replica of the original, according to the city, was removed from its pedestal Monday. The process took several hours, and the 7-foot statue was transported in a wooden crate to the New-York Historical Society, where it will be on a long-term loan.

Several cities have made moves to remove controversial statues tied to Confederate symbols and leaders connected to slavery.

Last month, the city's Public Design Commission voted 8-0 in favor of relocating the statue, due to Jefferson's history as a slave owner.

"Thomas Jefferson was a slaveholder who owned over 600 human beings," Councilmember Adrienne Adams, co-chair of the Black, Latino and Asian Caucus, said in a presentation last month. "It makes me deeply uncomfortable knowing that we sit in the presence of a statue that pays homage to a slaveholder who fundamentally believed that people who look like me were inherently inferior, lacked intelligence, and were not worthy of freedom or right."

The original bronze Jefferson statue was crafted by Pierre-Jean David D'Angers in 1833 and the replica was donated to the people of New York in 1834. After moving around in City Hall over the years, it has most recently sat in the City Council chamber since 1915, according to the city.

Councilmember Inez Barron told the commission last month that the statue of Jefferson was inappropriate in a room where New Yorkers gathered to govern.

Jefferson was the primary author of the Declaration of Independence.

The original statue still sits on display in the Capitol Rotunda in Washington, DC.