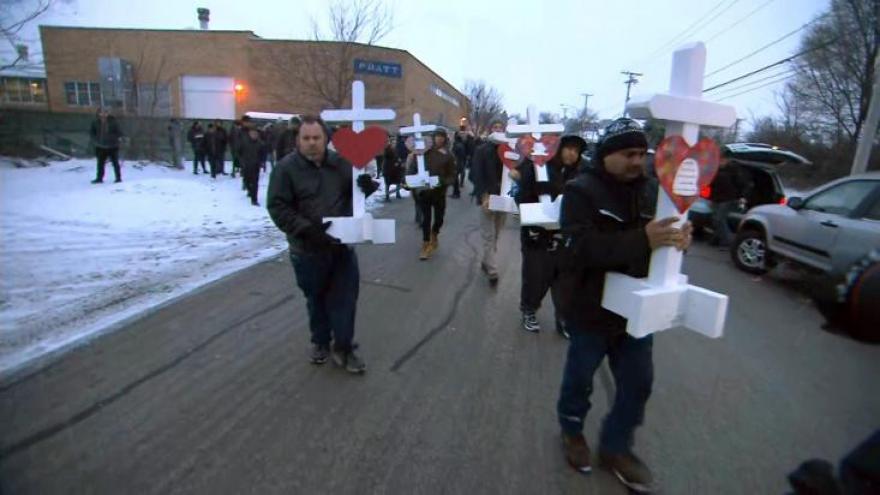 (CNN) -- Gun laws in the state of Illinois are among the strictest in the United States. But people on both sides of the gun control debate say it takes more than policy to prevent tragedies like the recent deadly shooting in a manufacturing plant in Aurora.

Given his criminal record, gunman Gary Martin should not have been able to obtain a gun-owner license or a firearm in 2014. When law enforcement discovered he had both, they were unsuccessful in getting them back.

Now, law enforcement is under pressure to explain how Martin kept the gun, which he used to kill five people shortly after he was fired from Henry Pratt Co. on February 15. Police killed Martin in the rampage.

But laws only work if they are properly enforced, spokesmen for the Illinois Rifle Association and the Illinois Council Against Handgun Violence told CNN.

They said the Aurora shooting shows that permitting and background checks are only as good as the information in databases. The shooting also revealed shortcomings in the process for revoking illegally obtained guns or gun permits, known as a firearm owner identification, or FOID cards, they said.

When enacting laws that give Illinois its B+ rating from gun control advocates, the state legislature charged the Illinois State Police (ISP) with carrying out all of those tasks. ISP issues gun licenses, or FOID cards, and concealed carry licenses. ISP and local law enforcement agencies are responsible for revoking FOID cards and weapons from those who should not have them.

"The big takeaway is the Illinois State Police need to be resourced up significantly to do all the jobs the legislature has given them to do," said Mark Jones, senior policy adviser for the Illinois Council Against Handgun Violence.

The circumstances in Martin's case before the shooting are not unique. In 2018 alone, Illinois State Police says it issued 10,818 revocations of FOID cards, but only 3,469 of those FOID cards were returned.

Experts say Martin's case offers a play-by-play example of how agencies failed to carry out these policies:

Illinois is one of three states that require a permit to simply own a gun, according to the Giffords Law Center to Prevent Gun Violence. Residents must obtain a FOID card and renew it every 10 years if they want to keep a firearm in their home or purchase one.

The application process for a FOID card includes a background check of state and federal databases for felony convictions or other factors that might disqualify someone from obtaining a gun.

When Martin applied for a FOID card in January 2014, ISP queried Illinois records and national databases through the Federal Bureau of Investigation's Criminal Justice Information Services.

Martin pleaded guilty in 1995 in Mississippi to aggravated assault, a felony that should have showed up in one of the databases. But his Mississippi arrest information was not revealed in any of the national databases.

"The background check system is only as good as the record system," said Ari Freilich, a staff attorney with the Giffords Law Center to Prevent Gun Violence.

It was only when Martin submitted his fingerprints for a concealed carry license that his Mississippi criminal record showed up, ISP said.

Including fingerprint collection in the FOID application could strengthen the permitting process, according to the Giffords Center and the Illinois Council Against Handgun Violence.

But the executive director of the Illinois State Rifle Association said any additional requirements for gun licensing only burdens law-abiding gun owners.

"The system works. It picks people up if they're in the system," Richard Pearson said of the current licensing process.

"The question with this guy is, what in the world happened? Why wasn't he in the system?"

ISP said it contacted the Mississippi Department of Public Safety to inquire about the lack of an entry in national databases for Martin's arrest, known as a state identification number. As of February 20, such a record for Martin was still not in any of the national databases.

The first time Martin's Mississippi arrest showed up in national databases was on February 21, ISP said in a statement Thursday.

CNN has reached out to the Mississippi Department of Public Safety. The Marshall County Circuit Clerk's office in MIssissippi gave this statement on Friday: "The Circuit Clerks office provides notice of all felony convictions to the Supreme Court Administrative Office of Courts in Jackson. The commitment paper sent to them has contact information. We do not provide information to a federal database unless it is requested."

After ISP learned of Martin's Mississippi arrest and conviction, it denied his concealed carry license application and revoked his FOID card.

The agency sent him a letter notifying him and telling him he was responsible for surrendering his FOID card and any weapons he possessed to law enforcement or an eligible FOID card holder.

ISP said its records do not contain a copy of any notification, written or electronic, to law enforcement for Martin. The Aurora Police Department also said it has no record of being notified about Martin. ISP did not provide an explanation about why its own policy was not followed.

If the holder of a revoked card fails to comply, the county sheriff or law enforcement agency may petition the court for a search warrant, ISP said. But Illinois law does not require them to do so.

That's where the system breaks down, according to the experts who spoke to CNN.

"The real policy failure is not having a program in place to recover the gun," Jones said.

Pearson said it's common for law enforcement to not go after people caught lying on FOID applications -- but it depends on the underlying offense, he said.

He understands that law enforcement may not want to spend time or resources going after low-level offenders in addition to their other duties. That Martin had a violent crime on his record and no one went after him is puzzling, he said.

Freilich said Martin's case is typical. "Very few states have processes in place to ensure firearms are removed from people who cannot have them," he said.

And where they do, law enforcement may not be sufficiently aware of their obligations or authority to obtain and enforce warrants, he said. Or, other duties may take priority over the time-consuming task of petitioning a court and then serving the warrants. Or, they may be concerned about the danger of such a task, he said.

Seven states have relinquishment processes for all people convicted of firearm-prohibiting crimes, he said. Just three -- California, Connecticut and Nevada -- require defendants to provide proof that they relinquished their firearms to a court or law enforcement within specific time frames. Those state laws are considered the strongest because they include penalties for failing to comply, he said.

Dedicated funding helps law enforcement to recover weapons in more systematic way, he added. As an example, he pointed to California, which has a department within its highway patrol dedicated to ensuring weapons are surrendered.

The policies in Illinois failed to stop this shooting, but it's also important to remember that Illinois is doing more than the vast majority of the country, he said.

"In much of this country, we wouldn't be having conversations about this because there are no laws in the first place."