A split-screen moment for the Ukraine crisis, with hard and soft power on display 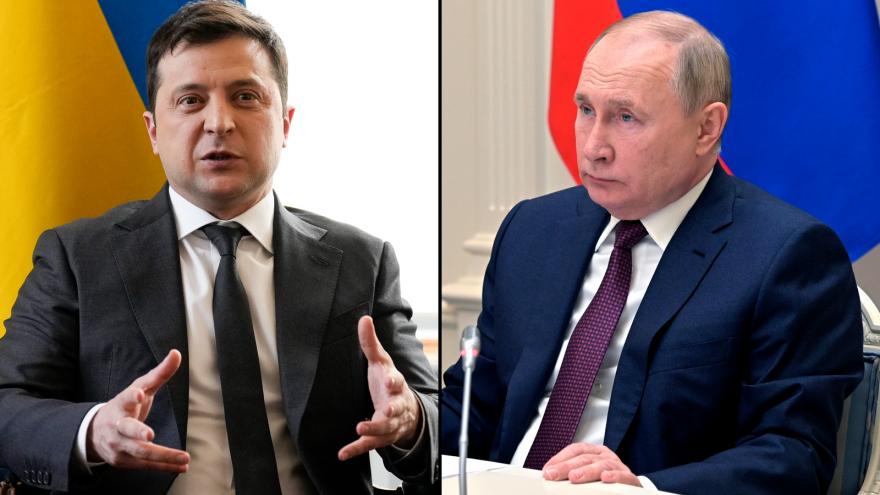 (CNN) -- The Ukraine crisis had a split-screen moment on Saturday, as the Kremlin put on a display of hard power and the Ukrainian president staged a charm offensive.

Russian President Vladimir Putin led headlines first, as he oversaw a major test of the readiness of Russia's nuclear triad: The land-, sea- and air-based components of his strategic deterrent.

In other words, the Kremlin leader got to brandish his nukes. The drills were a classic key-turning exercise: The Russians rehearsed the scenarios for ordering the launch of a nuclear strike, with crews launching intercontinental ballistic missiles, bombers dropping cruise missiles and a submarine firing a ballistic missile.

It's meant to impress. Nuclear deterrence involves an element of theater, and Putin played the role to the hilt, watching the big screen inside the Kremlin situation room alongside his ally and close partner, Belarusian President Alexander Lukashenko.

Russia's nuclear drills, in some respects, were the icing on the cake of massive military drills that have taken place over the past nine days. The Kremlin has presented those exercises -- in Belarus, on the Black Sea and in other parts of the Russian Federation -- as a major test for Russia's conventional armed forces.

But the Biden administration and its NATO allies believe, with high confidence, that those exercises are a smokescreen for positioning troops to invade Ukraine.

The United States estimates Russia now has 169,000-190,000 personnel in and around Ukraine, including Russian-led separatist forces inside the Donbas region of Ukraine. But despite a warning from President Joe Biden that Putin has made up his mind to invade Russia's neighbor, Ukrainian President Voldymyr Zelensky left his country to attend the Munich Security Conference on Saturday.

Speaking to CNN's Christiane Amanpour, Zelensky made it clear why he felt it urgent to leave the country as the Ukraine crisis reached a new peak.

"I'm the president, it's important for all our partners and friends to not agree about anything behind our back," he said. "We're not panicking, we're very consistent that we are not responding to any provocations."

Officially, at least, Russian-Belarusian military maneuvers are set to finish on Sunday. But the US and the Ukrainians are on high alert for any sign of a provocation that Russia might use as a pretext for using military force.

Those fears were driven home after the shelling of a Ukrainian kindergarten Thursday and when separatist leaders urged the evacuation of civilians from breakaway regions of eastern Ukraine.

Not all is what it seems, however. A CNN analysis of the metadata of a video appeal by pro-Russian separatist leaders urging evacuation indicated the videos were in fact recorded days earlier. That, in turn, further cast doubt on separatist claims the Ukrainian government was planning a large-scale offensive against separatist-held territory.

In his remarks Saturday, Zelensky nodded to the information war and praised his forces for restraint.

"We have a lot of provocations and we see them, we see this through the mass media, they're disseminating different provocative information, we need to preserve our stability, we need to keep calm and be adults," he said. "In these times, Ukraine's army is more adult than others."