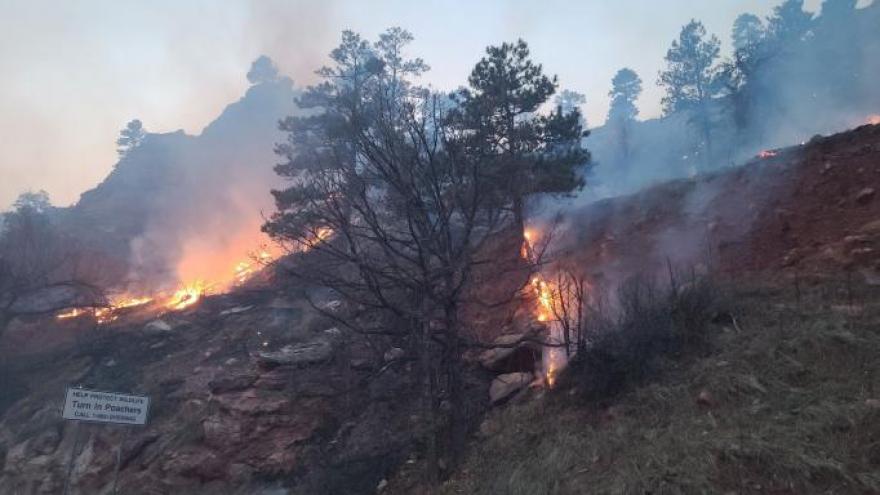 Official say a wildfire burning near the outskirts of Rapid City, South Dakota, has forced the evacuation of 400 to 500 homes on March 29.

The state of emergency will run through June 1 due to "severe drought and dangerous fire conditions," a news release from the governor's office said.

"This executive order is in response to the numerous fire incidents occurring throughout the state. The order will allow the state to provide greater assistance to the response efforts of local and volunteer firefighters," the release said.

The Schroeder Fire, burning in Pennington County, just a mile west of Rapid City limits, has forced the evacuation of 400 to 500 homes since it sparked on Monday morning, Rob Powell, the incident commander, said at a news conference.

The blaze has so far charred about 2,100 acres, Powell said Tuesday afternoon. Officials hope to have it 50% contained by the end of the day, he said.

At least one home and two pole barns have been destroyed in the fire, the Pennington County Sheriff's Office said on Facebook.

The fire started on "private property," according to Noem, but officials say an investigation is ongoing into the cause and origins of the blaze.

The dangerous weather conditions have made it a harder battle for the more than 200 firefighters on the scene.

"We are at record-dry conditions along with high winds playing a major factor in this fight," Jay Esperance, the division director for South Dakota Wildland Fire, said in a statement on Monday.

No injuries or deaths have been reported.

Meanwhile, Noem also provided updates on two fires burning near the Mount Rushmore National Memorial, which is closed because of the threat.

This area is about 20 miles southwest of Rapid City.

The two fires in the area have been dubbed the 244 Fire and the Keystone Fire.

The Keystone Fire was downsized Monday evening from 30 acres to 15 acres, according to the site.

"Fire officials request that people from the public to please stay away from the area and allow firefighters to do their work," it said.

No businesses are being threatened by the flames at this time, the governor said during the news conference.

"I do want to remind everybody that this is an incredibly fluid situation," she said. "That these winds are a major factor and that as they shift and change and we get those gusts, that's when the can jump and we're going to have to stay pretty mobile."