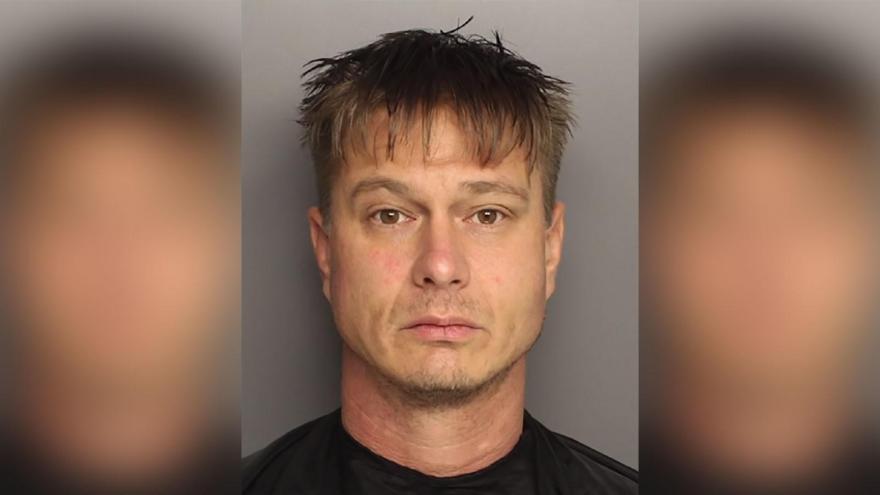 Sean Kaiser, 40, is charged with resisting arrest with assault, assault and battery, and shoplifting. A South Carolina sheriff's deputy is under investigation after she unintentionally shot Kaiser's mother.

(CNN) -- A South Carolina sheriff's deputy is under investigation after she unintentionally shot the mother of a shoplifting suspect while attempting to make an arrest, officials said.

The October 20 incident occurred after the deputy recognized the suspect in a shoplifting video from a convenience store and went to his home in Greer, South Carolina, to arrest him, Greenville County Sheriff's Office Capt. Tim Brown said in a video released by the sheriff's office.

Video from the camera shows the deputy arriving at Kaiser's home in, where he is standing outside and confirms that he had been at the store where the shoplifting took place. As the deputy begins reading Kaiser his rights, he goes inside the home and she grabs his sleeve and follows him, the video shows.

Inside the house, the deputy tries to negotiate Kaiser's surrender for several minutes, while his mother pleads for him to comply.

At one point, Kaiser grabs the deputy's wrists as she tries to take him into custody, the video shows.

Later, his distraught mother can be seen attempting to hold Kaiser back, but he gets away and charges at the officer. She fires and misses him but strikes his mother, who was standing behind him, the video shows. A neighbor can also be seen in the video.

Kaiser was arrested by another deputy who responded to a call for backup.

The suspect's mother was transported to the hospital, Brown said. He did not say where she was shot or provide her condition.

Jake Erwin, Kaiser's attorney, said his client maintains his innocence and will plead not guilty. Erwin said the deputy overreacted during an investigation of a nonviolent offense and should have waited for backup rather than entering the home.

"I don't think it takes any kind of experience or knowledge to watch that video and see that officer was out of line and escalated the situation at a variety of different points," he told CNN Friday. "Things did not have to go that way and I think it was her actions that made it get this bad."

"It's pretty obvious if you see the video that he was having a mental health crisis," Erwin said.

Kaiser was taken to a hospital for evaluation and then to the Greenville County Detention Center, where he was formally charged with resisting arrest with assault, assault and battery of a high and aggravated nature, and shoplifting, Brown said. He remains in the detention center on a $37,130 bond.

The deputy was taken to the hospital, where she was treated for a concussion and several bruises, Brown said.

The South Carolina State Law Enforcement Division and 13th Circuit Solicitor's Office will investigate to determine if the deputy's actions were within the scope of the law, sheriff's office spokesman Lt. Ryan Flood said.

Flood told CNN an internal investigation had cleared the deputy in the shooting but disciplined her for violating criminal process and arrest policy. He did not elaborate on the type of violation.

The deputy is on administrative duty as "she transitions into her regular duties, which will be roughly two weeks," Flood said. He said the bodycam video was released unedited.