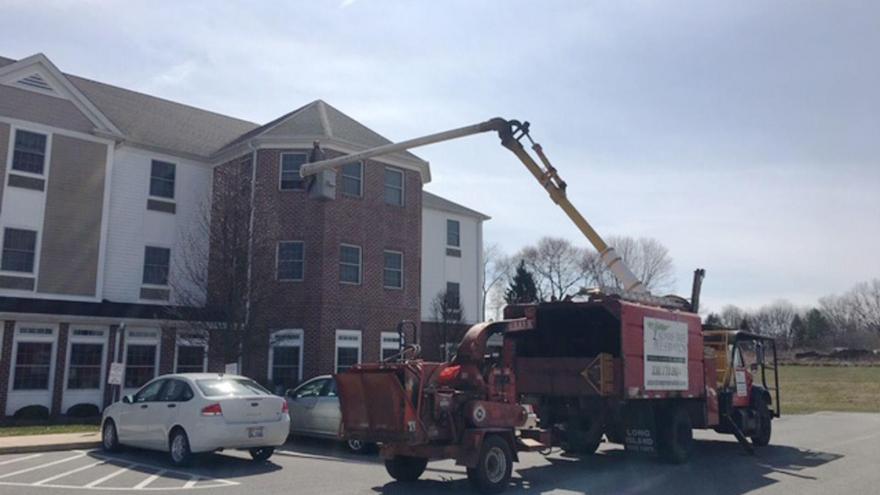 Charley Adams used an unusual method pay a visit to his mother at her assisted living home in Ohio.

(CNN) -- An Ohio arborist with a bucket truck is making a strong entry for son of the year award.

Charley Adams hasn't been able to visit his mom Julie at her Ohio assisted living home because of coronavirus restrictions, so he came up with a clever way to visit her without violating social distancing rules.

Adams owns Adams Tree Preservation in Youngstown and like any tree service business, he has a truck with a bucket attached to an adjustable boom for trimming hard-to-reach branches.

The truck's boom is tall enough to reach his 80-year-old mom's third-floor window, so he drove over for a visit. He said he checked with Windsor Estates Assisted Living before he came over, and they thought it was a neat idea.

The staff is taking great care of his mom and he appreciates everything they're doing to keep residents safe, but he said it's been tough for everyone.

"Her spirits were kind of down because she's used to being able to get out, go places and do things. And so I just had the idea that I'd bring the bucket truck over," Adams said. "I called her, and I told her to come look out the window -- and there I was."

They chatted about family for five or 10 minutes and he asked if she wanted any books or movies to entertain herself, Adams said. His wife Corrie was on the ground with their dogs, because his mom likes to see them.

His wife took photographs of the visit, which went viral when his uncle posted them on Facebook.

Adams said he usually takes his mom out to eat twice a week, but they've had to keep in touch through phone calls and texts.

He said she doesn't own a computer and isn't on Facebook, but the viral attention has kept her busy.

"Now with all the attention, she's getting lots of calls from family and friends from all over the country. And so it's been great," he said.

Adams planned to take the bucket truck over to see his mom again on Tuesday if he was able to finish his work on time.