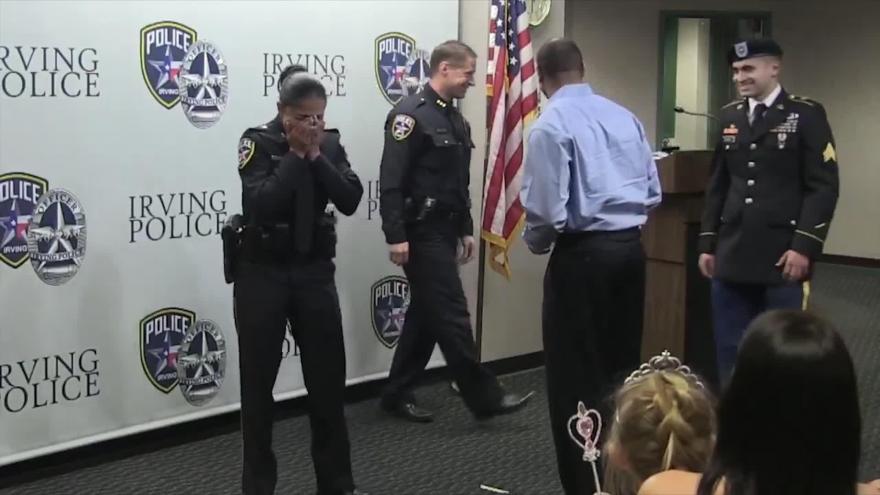 Erika Benning broke down in tears as her son 21-year-old Army Sgt. Giovanni Pando arrived at her swearing-in ceremony as a police officer in Irving, Texas.

(CNN) -- Erika Benning's heart was already racing as she prepared to be sworn in as the Irving Police Department's newest officer, but what came next pushed the 42-year-old mother's emotions over the edge.

Her son, 21-year-old Army Sgt. Giovanni Pando, whom she hadn't seen in over two years because he was stationed overseas, arrived at the ceremony on Friday to pin the badge on her uniform.

"When my son came around the corner and I realized that this was real, my breathing just started to slow down, and everything just felt really tight," Benning told CNN. "I just didn't want to pass out because I wanted to enjoy every moment of it."

The police department in the Dallas, Texas, suburbs posted the moment on Facebook, writing, "All swearing-in ceremonies are special but every once in a while one tugs at your heart strings a little more than others."

Pando is stationed thousands of miles away in Germany, but with the help of Benning's husband, the police department was able to coordinate the perfect surprise.

"It was overwhelming. I felt every emotion you could think of just from being happy for her and also missing her. I was also trying to keep my composure as well," Pando told CNN, while admitting that a "little bit of tears" came out.

Benning had wanted to be a police officer ever since she was a child, but she had to put her dream on hold as she became pregnant with Pando at a young age. Pando joined the US Army after graduating from high school, and while his deployment to Germany was the first time being apart from his mother for so long, they still tried to talk every week.

Once he finishes his stint in the Army, Pando said he plans to become a police officer to follow in the steps of his mother who truly inspires him.

"She's never let something stop her from achieving what she wants. And while raising me, that's always something she's preached to me. If you want something, work for it and you'll achieve your goal," Pando said.

While Pando returns to Germany on Friday, Benning said her swearing-in ceremony will be a moment she will remember forever.

"The only other moment that I will never forget that is more meaningful than this was the day I gave birth to him," Benning said. "So, this moment of him pinning my badge, I have to say is up there with that."