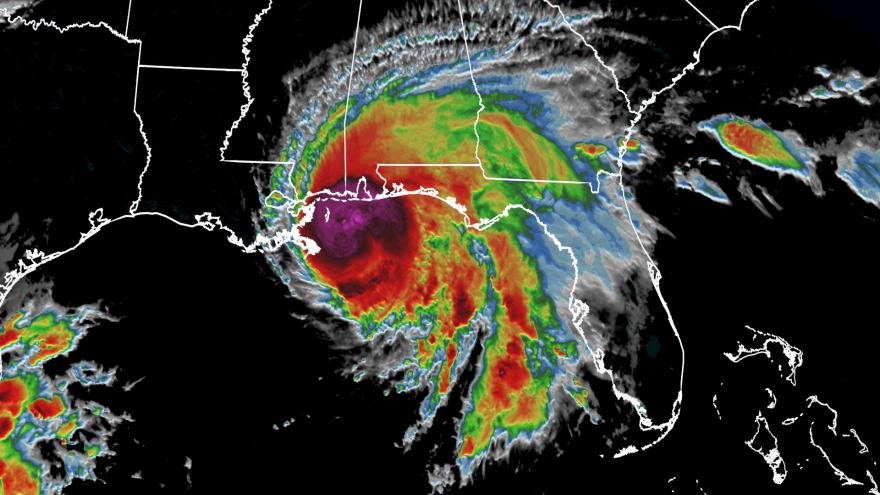 The storm was moving slowly in the Gulf overnight Tuesday and churning into a Category 2 hurricane, and conditions deteriorated overnight. The Pensacola Police Department in Florida urged people to stay off the roads because hazardous debris "have become too numerous to list," and the National Weather Service office in Moblie, Alabama, warned people to "hunker down."

The office reported 70 mph wind gusts in West Mobile and also issued a flash flood emergency, saying these "warnings are issued for exceedingly rare situations when a severe threat to human life & catastrophic damage from a flash flood is happening."

More than 320,000 customers are already without power along the Gulf Coast and thousands have evacuated ahead of the storm.

The storm has brought flooding and storm surge to several coastal communities and prompted the evacuation of thousands of people directly in its path.

The storm's slow speed is expected to continue through Wednesday as it turns to the north and then northeast, bringing with it strong winds and potentially historic flooding.

Rainfall of 10 to 20 inches is expected across Mississippi, Alabama and the Florida Panhandle, with isolated amounts of 30 inches possible.

Florida's National Guardhas activated 175 members to preparefor search and rescue operations, with 30 foot high water vehicles on standby for use if needed, according to a tweet from the Division of Emergency Management. And police inPensacola have warned residents to stay off the roads as "flooded roadways" and "hazardous debris ... have become too numerous to list."

The slow moving nature of the storm also means that hurricane force winds and storm surge will be in the area longer, particularly to the east of the storm center.

Flash flooding with rainfall amounts of 6 to 10 inches could be seen in Georgia and the Carolinas later this week as the storm moves inland and weakens.

More than 150,000 customers have lost power in Alabama, Mississippi and Florida as of early Wednesday morning, according to PowerOutage.US.

Those in the path of Sally are also experiencing water outages as conditions are unsafe to make repairs to utilities because of the storm.

Escambia County Utilities Authority issued an alert Tuesday that they are unable to respond to a significant water main break in Pensacola Beach due to storm conditions and bridge closures ahead of Sally.

The water system had to be shut off at approximately 11:00 p.m. as storm surge and tide levels will also inundate the sewer collection system, according to ECUA.

"We urge residents who are still on Pensacola Beach to store water if possible. ECUA will dispatch crews to locate the break and make repairs as soon as possible post-storm," the notice said.

Businesses are also closing because of the storm, with Walmart announcing 54 closures due to Sally, Walmart spokesman Scott Pope told CNN Tuesday.

"We are tracking the storm in real time and have activated our Emergency Operations Center in order to support our associates in the impacted areas," Pope said.

Across the Gulf Coast, three military installations have announced that only mission essential personnel should report to work Wednesday.

Mandatory evacuations have been ordered for much of the coast and low-lying areas from Mississippi to Florida. Shelters have been opened to accommodate those evacuees.

People have been preparing for Sally since the weekend, filling sandbags, grabbing supplies and prepping their homes.

Merrill Warren of Summerdale, Alabama, which sits about 16 miles inland from the Gulf, told CNN he brought in furniture, purchased gas and other supplies, and got his generator ready for the storm.

On Tuesday night he reported that heavy rains and winds of up to 39 mph had already hit inland. Warren said he's more concerned about the potential for increased rainfall and surges than anything else.

"This isn't the first Category 1 Hurricane that I have been through. I have been there through Hurricane Nate and Tropical Storm Gordon," Warren said. "I'm more worried about the rain for this one ... The rain and storms surge are definitely going to be the bigger issue with a storm moving at 2 mph."