A short history of American food (whatever that is) 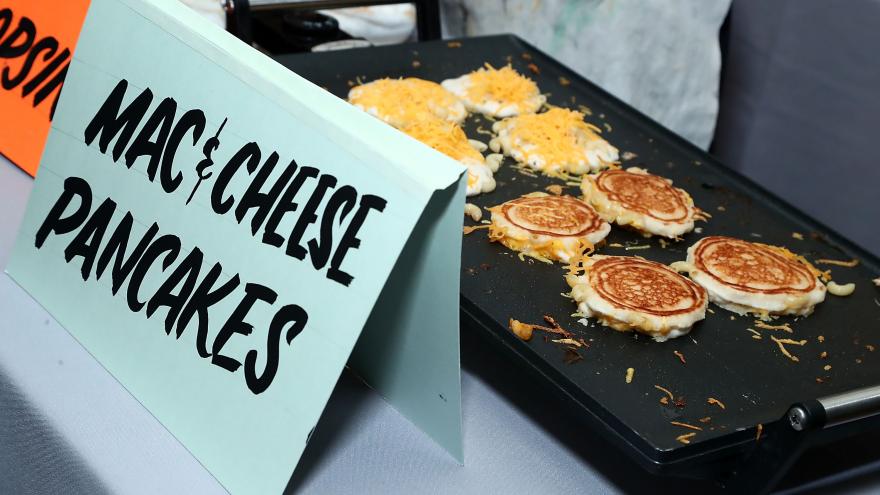 (CNN) -- Your Thanksgiving table may have been smaller this year, but if it was still full of squashes, corn pudding, turkey and cranberry sauce, thank Native Americans -- those foods are indigenous. But that apple pie is international -- apples are from Kazakhstan and the pie part is from England.

It's hard to define what "American food" is and yet many historians have tried. Yale Professor Paul Freedman is one of them and last year published "American Cuisine and How It Got That Way."

"The exuberance of American dining is its saving grace," says Freedman. "... Despite the fact that many things are, you know, not all that good for you."

Americans get pretty excited about food, as does much of the world, but historians like Freedman say we actually share some key culinary traits that are uniquely American in origin and we're not talking about throwing everything in the deep fry. Fast food will always be an American hallmark, even though we're eating less of it these days, but we're more than McDonald's and cheese-in-a-can and we've even exported some very American ways of eating. Yes, France. You've learned a thing or two from us, too.

To understand what our tastebuds all have in common, let's look at five key developments in the history of America's eating habits.

1) The good old days when sugar was healthy

Up until the late 1800s, people preferred to eat the foods that filled them up. Dairy, meat, hominy, oatmeal and sugar were staples -- vegetables, not so much. Vitamins wouldn't be fully appreciated until the 20th century.

"They didn't like spices because they think they created indigestion and were a distraction from the actual food," says Freedman, who noted that spices were considered the "food of the poor."

Historian Sarah Lohman says that it wasn't quite as bland as it sounds. Mary Randolph's 1824 cookbook, "The Virginia House-Wife," calls for chili peppers. 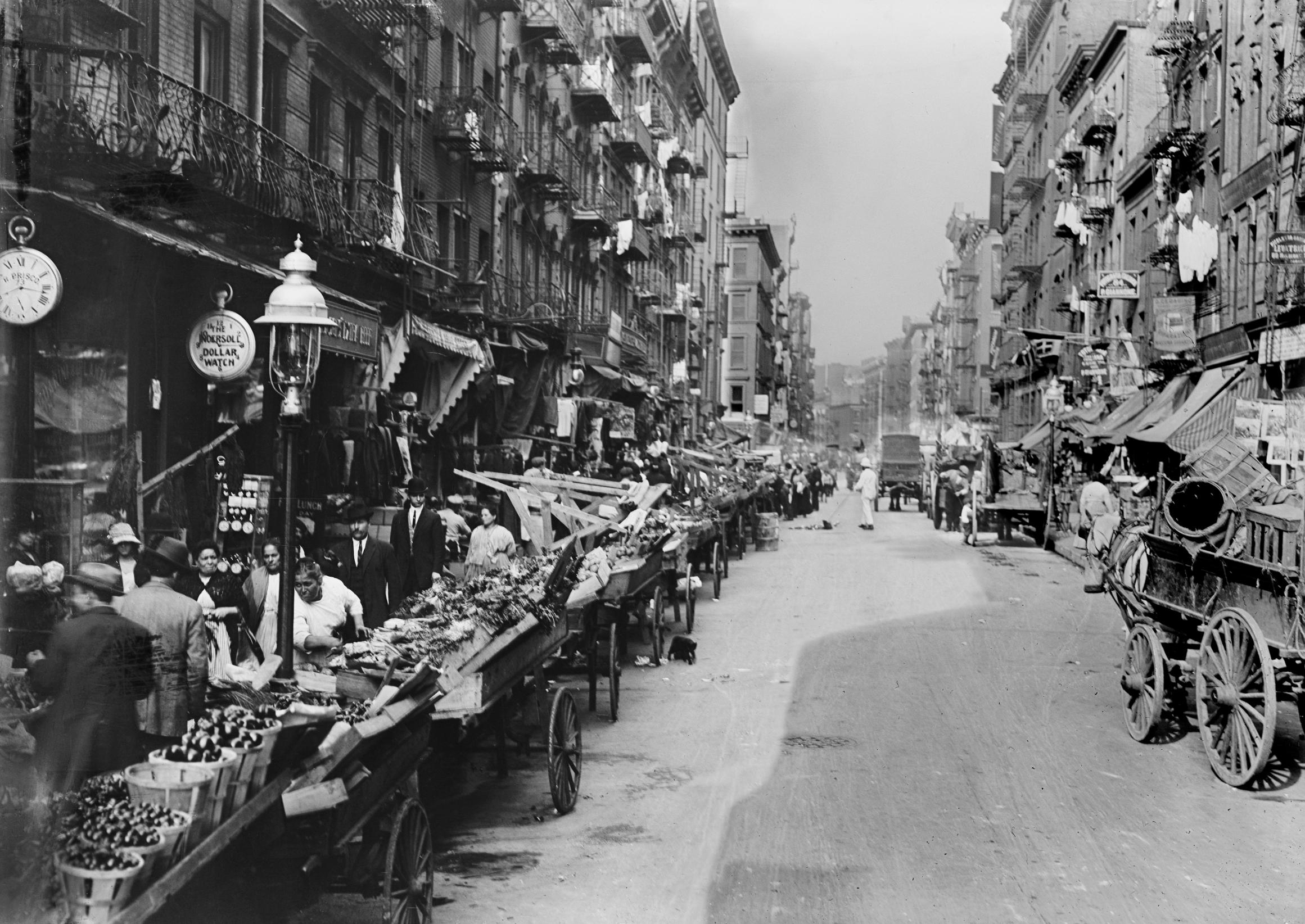 2) Food travels around the country

In the 19th century, while New Englanders were eating brown breads and brown stuffing, the South had its pork, molasses, greens, griddled cornmeal and corn breads.

Black cooks had a hand in our cuisine from the very beginning. From South to North, their contribution was so ubiquitous its significance has been long overlooked.

Just one example is the story of ice cream. James Hemmings, Thomas Jefferson's enslaved chef, traveled with the family to France, learned the art of making ice cream and brought it back to the US along with copper cookware, European-style mac 'n' cheese and French fries.

Historian Jessica Harris is lead curator for the exhibition "African/American: Making the Nation's Table" at the Museum of Food and Drink in New York City. She said other Black chefs traveled early on with aristocrats as they left the South for summer homes in places like Newport. Later Black Pullman operators moved west along with the railroads, bringing their families and their familiar food. After the Civil War, the Great Migration brought Black cuisine just about everywhere.

"It's about looking at history, looking at culture, looking at any of those things as science through the spyglass of food," said Harris. "And it's a great spyglass because it's one everybody shares."

Then in the late 19th century, it's New England's filling, yet perhaps monochromatic, food that comes to the forefront. 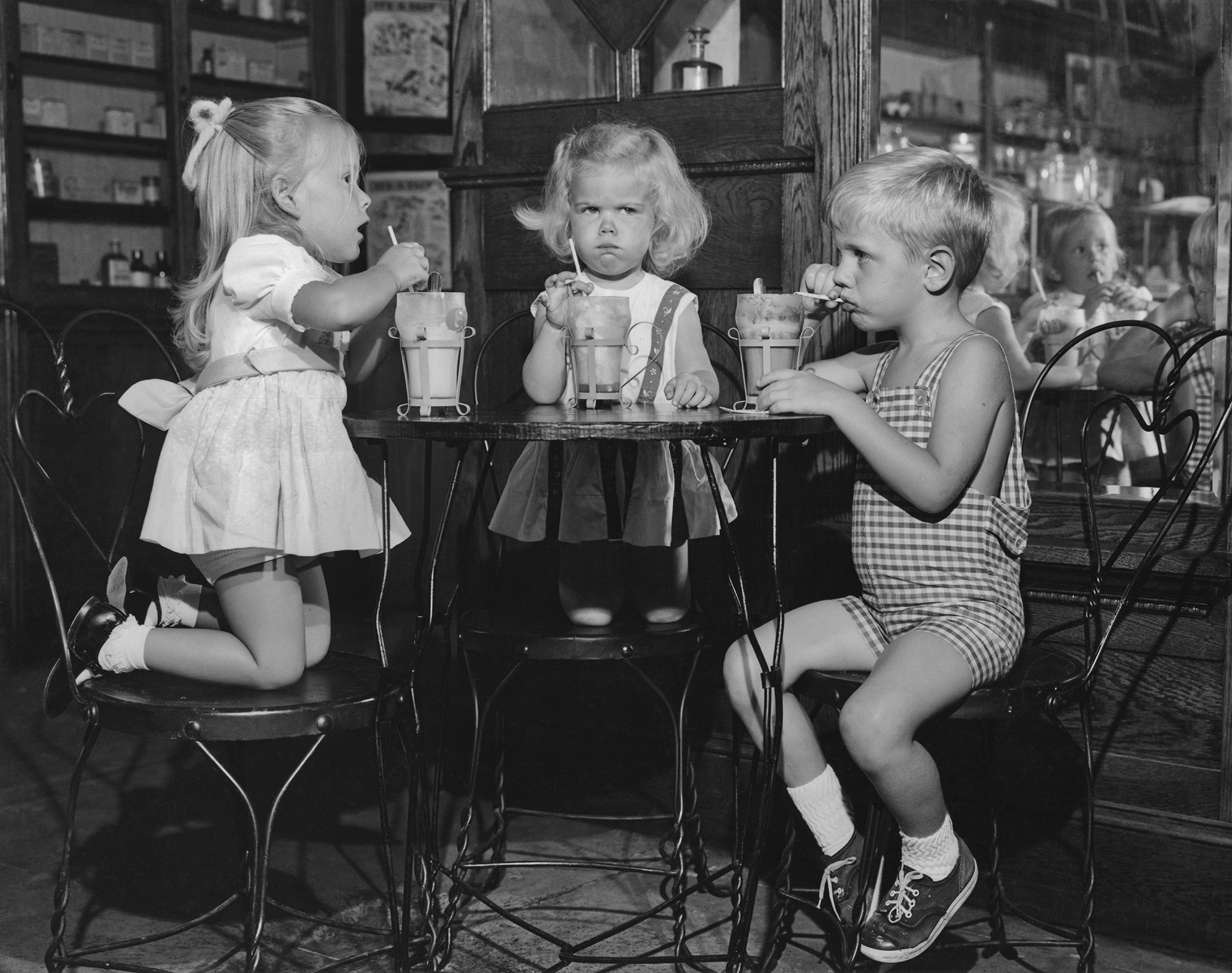 Scientific ideas around food have always existed, but in the late 1800s, people began to prioritize invisible components of food learning, such as how to avoid illnesses like scurvy, beriberi and pellagra. Vegetables became a bit more important -- albeit cooked for long periods of time.

A woman's kitchen became her laboratory and her cookbooks were her study materials. What was thought of as "nutrition" was incredibly important and yet women couldn't learn how to cook from Mom, nor did they want to.

"The idea was that you shouldn't just do everything the way your mother did because that was, first of all, drudgery," says Laura Shapiro, an historian who writes about women and food. "It was really hard work and it wasn't modern."

Starting in 1890, Fannie Farmer began turning hearty New England dishes into sophisticated meals, though sometimes that meant your plate was all white or all brown. The textbook she wrote later became "The Fannie Farmer Cookbook" and its popularity lasted for decades, until usurped by "The Joy of Cooking" in the 1930s.

Shapiro says Farmer's writing was rather dry but she did have her fun. Farmer invented the ginger ale salad that congeals canned fruit in gelatin and soda.

Her book came out right as families were moving further away from their home base and spreading out across the country.

"You are this young bride and you have to cook in your new home and you don't know how," says Shapiro. "Once you learn, you can do all this wonderful cooking and your husband will be healthy and he won't become an alcoholic."

That's a lot of pressure to put on your meatloaf. Thankfully, Americans got some help when we really didn't earn it.

4) When we get what we don't deserve 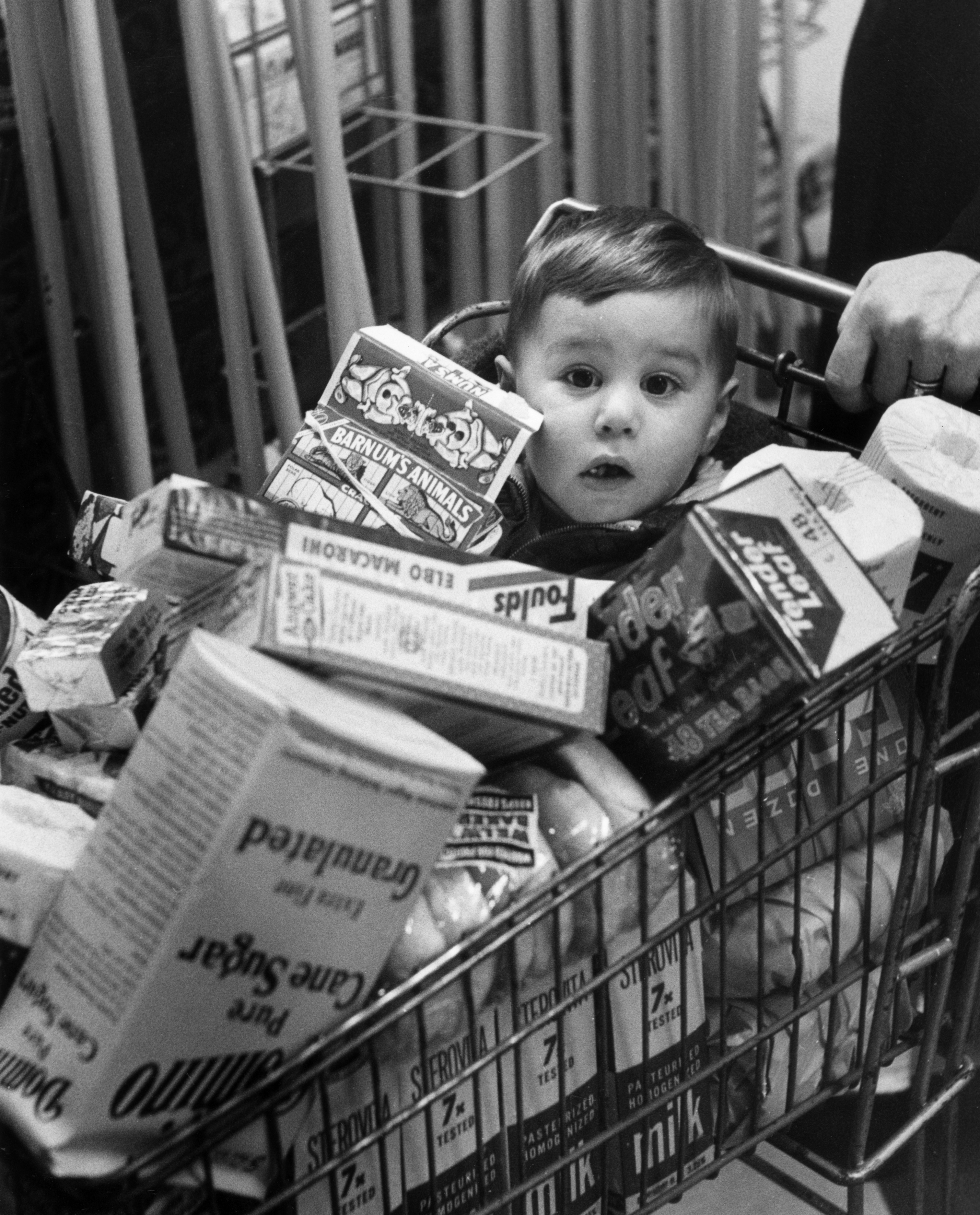 Immigration, migration and variety in manufacturing are where we start to see America really start to form eating habits that separate us from other countries. While every country in the world has immigration, in America it happened on a large scale and very early on.

Historian Sarah Lohman spent years leading tours and classes about the lives of immigrants for New York City's Tenement Museum and traveled to 12 different parts of the country for her book, "Eight Flavors: The Untold Story of American Cuisine."

"At the same time that domestic science is becoming a part of the American food landscape, that's also when we're seeing a huge influx of immigrants from Italy and Eastern Europe, particularly Jewish immigrants," says Lohman.

Lohman says Eastern Europeans brought their love of sour foods, Italians brought on the garlic. Their food changed when the reached America, with Italians in particular opting for foods like olive oil and aged cheeses. Back in Italy, these were expensive exports only, but in the States Italians could afford them and they used them liberally.

That's also true for Chinese cuisine which spread steadily across the country just as prejudice was growing against Chinese people. Kevin Kim researches the history of Chinese people in the Deep South and is working on a project about the continued displacement of urban immigrant communities for the Smithsonian Anacostia Community Museum.

"One of those contradictions and complexities is that Chinese food in that early period is marked by exclusion," says Kim. "It's marked by racism but at the same time there is this hunger for something exotic and yet familiar."

The Chinese Exclusion Act of 1882 was aimed at keeping out Chinese laborers who came to the US for plentiful jobs, but the Act contained exceptions. Merchants who owned stores and grocery stores were exempt and later on, so too were restaurant owners. The number of Chinese restaurants doubled from the early part of the 19th century to the mid-20th century.

Kim explains that these restauranteurs brought their own Asian flavors and cooking methods but adapted them by growing or using local ingredients. Broccoli wasn't used in China but appears on Chinese menus here. Chinese cooks living in African American and Caribbean neighborhoods added collard greens or fried chicken to their menus.

Another boom comes when immigration opens up in 1965, bringing people from many parts of Asia. While immigration begins to melt its way into American meals, more variety came as American manufacturing moved like warp speed into a new era.

Processed foods like cake mixes and powdered eggs existed before the great World Wars, but they reached new levels when the wars were over. Innovations like canned and frozen foods that fed troops en masse were still being made at lightning speed and manufacturers needed to find a new market for them.

So, companies focused their attention on women at home. Grocery stores were game: Their produce requires a lot of manpower and much of it ends up getting thrown out, unlike those rows and rows of canned tomatoes.

Shapiro says manufacturers created the notion that women were always busy, always running out of time. So, they were "creating a world in which every day, every meal was an emergency."

"Never say that women welcomed it," says Shapiro, railing against the images portraying happy women in ads for quick mixes. "That is just bullshit. The women put up a huge resistance. The food industry was astonished."

"Variety comes in to mask the idea that things are processed," says Freedman. "It kind of distracts attention from the fact that industrial food loses some of its flavor and freshness by the very fact of its being processed."

American food as it is now

Now we eat so many, many things, both processed and fresh, both familiar and exotic. We love it all as evidenced by the massive popularity of food television, food magazines, food museums and food exhibitions. That's a worldwide phenomenon.

"Most people like to eat and like to come together around food," says Catherine Piccoli, Acting President of the Museum of Food and Drink. "But it also is something that allows us to learn about one another."

Freedman found through his research that in the mid-20th century, the sheer variety of flavors in our supermarkets astonished people visiting from all over the world. Now, that variety is found everywhere, but historians argue it started in America first. Americans have long been willing to try new things, both in the supermarket and while eating out.

"A hallmark of American cuisine is variety and variety includes exuberance," says Freedman. "Americanization has come to the world, not by McDonald's, but by eclecticism."