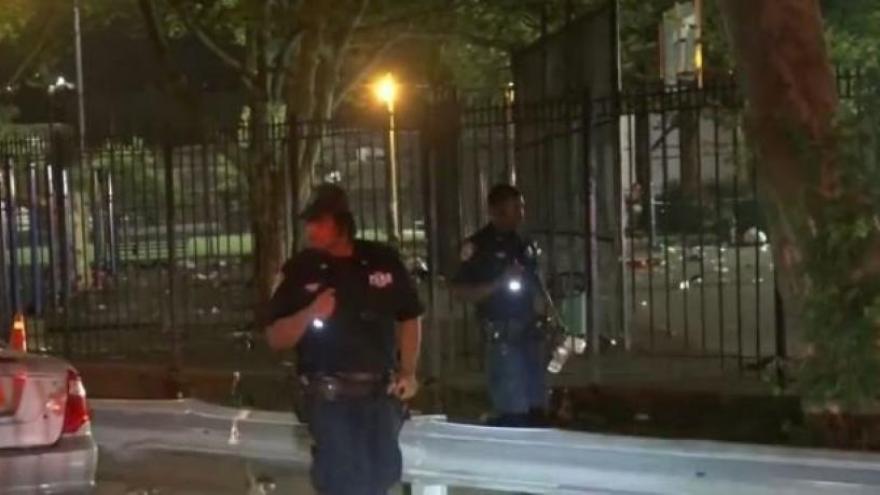 (CNN) -- Twelve people were struck by gunfire at a Brooklyn park shortly after the close of a festival that drew thousands of revelers, police said.

One man died and another victim is in critical condition after the shooting Saturday night, the New York Police Department said Sunday.

The wounded victims range in age from 21 to 55 years old. The name of the 38-year-old man who was killed has not been released, pending notification of relatives.

The melee broke out around 11 p.m. at the park's playground, not long after the second night of the "Old Timers" festival ended.

Authorities believe no less than two shooters and two guns were involved in the attack, NYPD Deputy Chief Michael Kemper said. But no arrests have been made, and the motive remains a mystery.

NYPD Commissioner James O'Neill said a few thousand people were at the Old Timers event. Police asked anyone who took photos or video that might be helpful in the investigation to contact Crime Stoppers at 800-577 TIPS or crimestoppers.nypdonline.org.

Officials said more than 100 city police officers were present when the shooting occurred.

Crystal Howard, a spokesperson for NYC Parks and Recreation, said the Old Timers event started in 1991.

"It's been a time for family and friends of the Brownsville neighborhood to come together and celebrate years of friendship and community," Howard said. "We are saddened by this senseless act of violence, and offer our deepest condolences and concern to the family of the deceased and for those injured."