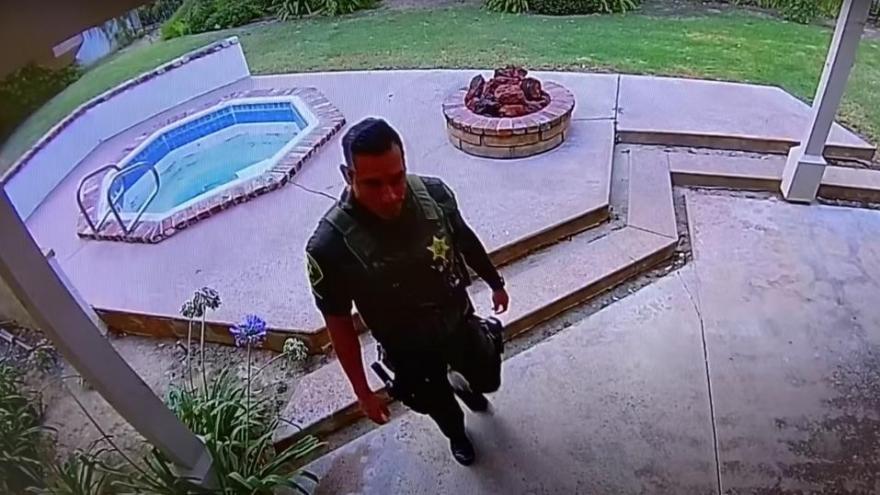 Surveillance video captured Orange County Sheriff's Deputy Steve Hortz entering a residence where he had responded to a call earlier.

(CNN) -- A sheriff's deputy in California was arrested after he allegedly stole items from a home where he had previously responded to a death, authorities said.

Orange County Sheriff's Deputy Steve Hortz, a 12-year veteran of the department, responded to a call on July 20 at a home in Yorba Linda after a man in his 70s died there, the department said in a news release.

Then on September 9, an attorney for the family estate contacted the sheriff's department, according to the news release. The attorney said some items were missing from the home, and that surveillance video showed a man who appeared to be the deputy entering and leaving the home on at least three separate occasions.

The first recorded instance happened on July 27. In the video, police say it appears that the deputy, wearing his uniform, returned to the home he had visited a week earlier and broke into the unoccupied residence, according to the news release. He left shortly after and it is unclear whether he stole items on that visit, the sheriff's department said.

Then on August 10 and August 16, the deputy returned again early in the morning, authorities say, this time dressed in plain clothes. He left with weapon safes, ceiling fans and cases of unknown items, the sheriff's department said.

Hortz was arrested on Thursday and booked into the Santa Ana Jail on suspicion of burglary. A spokesperson from the jail confirmed that he was released later that day.

"The suspected criminal actions of this deputy are a violation of public trust, are inexcusable and intolerable," Orange County Sheriff Don Barnes said in a statement. "This deputy will be held accountable through a swift and thorough process including a full criminal and internal administrative investigation."

The Association of Orange County Deputy Sheriffs, the local union, called the report of the allegations "shocking and disappointing" in a statement to CNN.

"This conduct, if true, is tremendously hurtful to the thousands of dedicated peace officers that AOCDS represents in Orange County," the statement read.

"We are saddened that the news may undermine the strong public support for the hard work and dedication of deputies and officers who do a fantastic and honorable job," the statement read. "These brave men and women put their lives on the line every day. We totally support the justice system in dealing with these very sad and disheartening allegations."

A person who answered a phone number for Hortz said that he was unavailable for comment. CNN has reached out to his attorney for comment.

The Orange County Sheriff's Department said it launched an investigation immediately after learning about the incidents.

The department said it placed him on paid administrative leave, and spokesperson Carrie Braun told CNN that the agency was "looking into the possibility" of placing him on unpaid leave. The department also announced that it would investigate previous calls the deputy made to determine whether similar incidents had happened before.

"These actions undermine the good work done every day by the men and women of the Orange County Sheriff's Department," Barnes said.