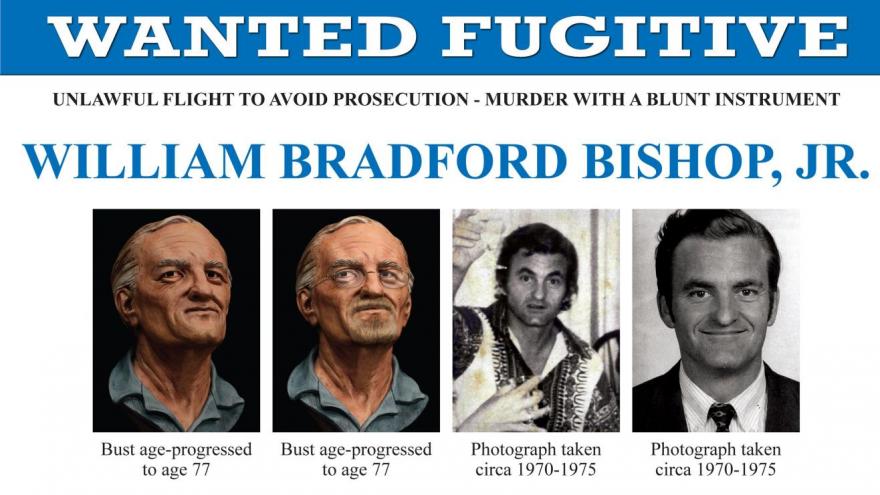 Photos of William Bradford Bishop from the FBI's wanted poster for him. At left is an age-progressed bust of Bishop while the two photos at right are from the 1970s.

(CNN) -- Kathy Gillcrist knew she was adopted, but what she didn't know is that a search for her birth parents would lead her to the FBI's most wanted list.

Gillcrist, 63, told CNN affiliate WECT that she took a home DNA test in 2017. When filling out the paperwork accompanying the test, she checked the box that said she was adopted and was interested in looking for other relatives.

The test results brought her the first match, her third cousin Susan Gillmor in Maine.

"We were amazed that we were a lot alike," Gillmor told WECT. "We both were English majors; we were both teachers."

Gillmor, an amateur genealogist, decided to help Gillcrist get more answers about her birth family. She helped find Gillcrist's birth mother, who had put her up for adoption in 1957.

But Gillmor had more difficulty finding her birth father. After several years of research, though, she finally solved the puzzle.

And suddenly, a family reunion fairy tale was not in the cards. Gillcrist's father, a former foreign service officer, is a federal fugitive.

A father wanted for murder

Bishop has been wanted by the US government since the 1970s and was put on the FBI's most wanted list for murder in 2014.

According to the FBI, Bishop is wanted for allegedly bludgeoning to death his 68-year-old mother, his 37-year-old wife and their three sons, ages 5, 10 and 14, in Bethesda, Maryland, on March 1, 1976. He then allegedly transported their bodies to Columbia, North Carolina.

"(He) dug a hole, a shallow grave and laid the bodies in that shallow grave and then proceeded to set them on fire," said FBI case agent Charles Adam in an FBI video post in 2014 when Bishop was added to the most wanted list.

Bishop, 39 years old at the time, was charged with murder by the Montgomery County Sheriff's Office in Rockville, Maryland, and then charged federally with unlawful flight to avoid prosecution, according to the FBI.

Gillcrist said when Gillmor discovered who her father was, all Gillmor told her was his name.

"I said 'Is it someone famous?' She said, 'Um, yeah.' I just laughed. We have a great sense of humor in my adoptive family and I thought 'of course, my father's a murderer!'" Gillcrist said.

It's quite a contrast from her quiet and reserved adoptive parents, but Gillcrist believes she may have gotten her driven personality from her birth father.

According to the FBI, Bishop has a bachelor's degree in American Studies from Yale University and a master's in Italian from Middlebury College in Vermont. In 1976, he was working as a foreign service officer at the State Department in Washington, DC, before he vanished, according to the FBI.

The FBI says that Bishop had found out he had been passed over for a promotion at the State Department the day of the killings.

Research by Gillmor and Gillcrist has identified Gillcrist's birth mother and more than a dozen relatives in Massachusetts, several of them being half-siblings on her mother's side.

She has written a book about her experience titled "It's in My Genes."

It's unclear to Gillcrist if her biological mother knew about her father's past, but Gillcrist said she's glad she didn't find out until she was older.

As for her father, he would be 84 years old if he is still alive. Gillcrist believes he is alive and still on the run.

The FBI says that Bishop should be considered "armed and extremely dangerous with suicidal tendencies."