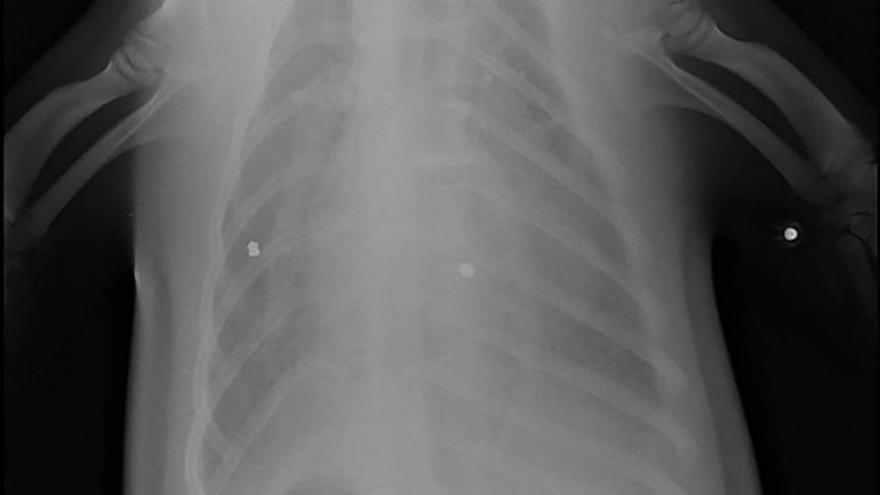 An X-ray reveals fragments of two pellets in the sea lion.

(CNN) -- A California sea lion rescued in mid-December after it was found suffering from pellet gun wounds had to be euthanized because of its injuries.

Animal control found the 1½-year-old female sea lion in distress at a surfing spot called The Wedge in Newport Beach, California, on December 16. Her rescuers at the Pacific Marine Mammal Center in Laguna Beach named her Mandalorian.

Krysta Higuchi, a spokeswoman for the center, told CNN there are several Star Wars fans on staff and they have named other rescued animals after "Star Wars" characters like Yoda, Leia and Skywalker.

One of the rescuers had just finished watching the popular Disney series "The Mandalorian" and wanted to give the injured sea lion a good, strong name.

Rescuers found two distinct wounds on the sea lion, including a draining abscess on her dorsal back that was causing significant pain and discomfort and limiting her mobility, according to a press release.

An X-ray revealed two wounds on her chest that most likely came from a pellet rifle. One of the pellets struck between her ribs and vertebrae, and the entry point was severely infected. The other pellet was lodged between two ribs.

"We tried draining the abscess but once (staff) noticed the gunshot wounds, it was a waiting game to see if she would make a turn for the better," Higuchi said. "Unfortunately, she made a turn for the worse."

Mandalorian was carefully monitored throughout the next week but her health continued to decline. On December 22, she was humanely euthanized.

During the necropsy, staff discovered her body was filled with puss and dead tissue.

"We know we made the right decision and the animal is no longer suffering," Higuchi said.

She told CNN they have no idea why this sea lion was shot but said it could have been some young kids playing with a pellet gun, an angry fisherman, or even someone annoyed that the sea lion was on his or her boat.

"There's a way we can cohabitate with these animals," she said. "If an animal is in a location where it shouldn't be, we'll help get it relocated and assist with animal control."

The gunshot pellets were recovered and sent to the National Oceanic and Atmospheric Administration's National Marine Fisheries Service Office of Law Enforcement for investigation. The office investigates suspected violations of the Marine Mammal Protection Act, which bans injuring or killing marine mammals in the wild, including sea lions.