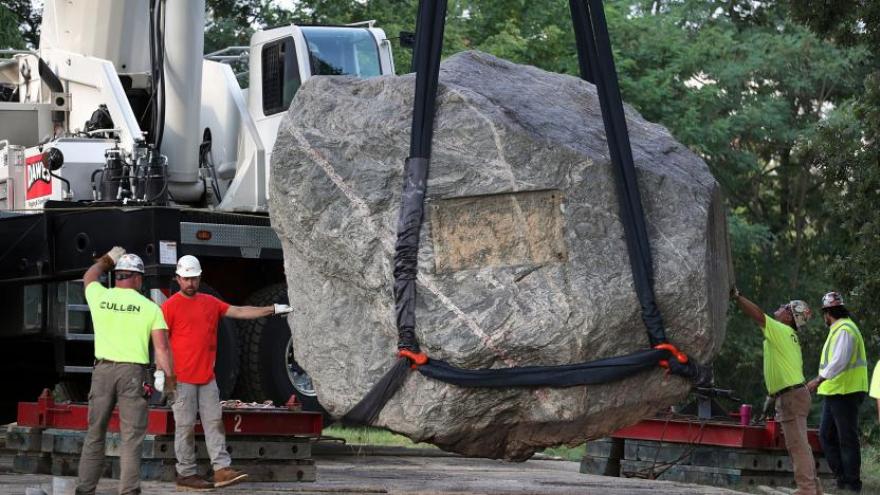 Crews work to remove Chamberlin Rock from Observatory Hill on the University of Wisconsin campus in Madison on Friday.

(CNN) -- The University of Wisconsin removed a 42-ton boulder from its Madison campus Friday after complaints from students of color who called the rock a symbol of racism.

Chamberlin Rock, which had sat on Observatory Point since 1925, was named after Thomas Chamberlin, a geologist and former university president who served from 1887 to 1892.

A 1925 Wisconsin State Journal article used the n-word as part of a nickname for the giant boulder.

The Wisconsin Black Student Union last summer called for the rock to be removed from campus as one of a series of demands it said were aimed at seeking justice for Black students. The campaign came in the wake of the police killings of George Floyd and Breonna Taylor, the union said in a statement posted on Instagram Friday.

"It was very meaningful for me to be there and to see the process all the way through to the end," senior Nalah McWhorter said in a university news release. McWhorter, who was the president of the Wisconsin Black Student Union for the past academic year, was there when the boulder was removed Friday.

"It was about a year ago that we released our demands and met with the chancellor and explained to her why those demands meant so much to us," she said. "It was a powerful moment today to see this demand come full circle."

The university had to get permission from the Wisconsin Historical Society to remove the boulder, as it sat within the area of a Native American burial mound, according to the university. The rock was not sitting on top of a burial site.

The removal of the rock was approved by UW-Madison Chancellor Rebecca Blank in January.

"It took courage and commitment for the Wisconsin Black Student Union to bring this issue forward and to influence change alongside UW's Wunk Sheek student leaders," Vice Chancellor for Student Affairs Lori Reesor said in a news release.

"In the midst of demands for justice following George Floyd's murder last summer, the students wanted change on campus and they worked hard to see this through. While the decision required compromise, I'm proud of the student leaders and the collaboration it took to get here."

UW student and activist Ayomi Obuseh told CNN affiliate WISC on Friday that removing the rock meant a lot to her and others who fought for its removal. "It's showing that our hard work isn't going to waste, that if we keep pushing forward, change can come we're seeing that with events like today," she said.

The boulder is a large example of a rare, pre-Cambrian era glacial erratic, which may be more than two billion years old, the university said. A glacial erratic is a large rock that was moved by a glacier and left behind when the glacier moved on. The erratic is made of a different rock type than is usually found in the area.

The plaque honoring Chamberlin has been removed. A new plaque for the geologist will be placed on Chamberlin Hall.

The chancellor's office is using private donations to pay the $50,000 price tag for the rock's removal, the university said. It's being moved to university-owned land near Lake Kegonsa, southeast of Madison.

Gary Brown, director of campus planning and landscape architecture, shepherded the search for the rock's new home. "Moving the rock to this remote site prevents further harm to our community while preserving the rock's educational and research value for current and future scholars," Brown said in a news release.