A robot lives in this Antarctic penguin colony. It's trying to save them 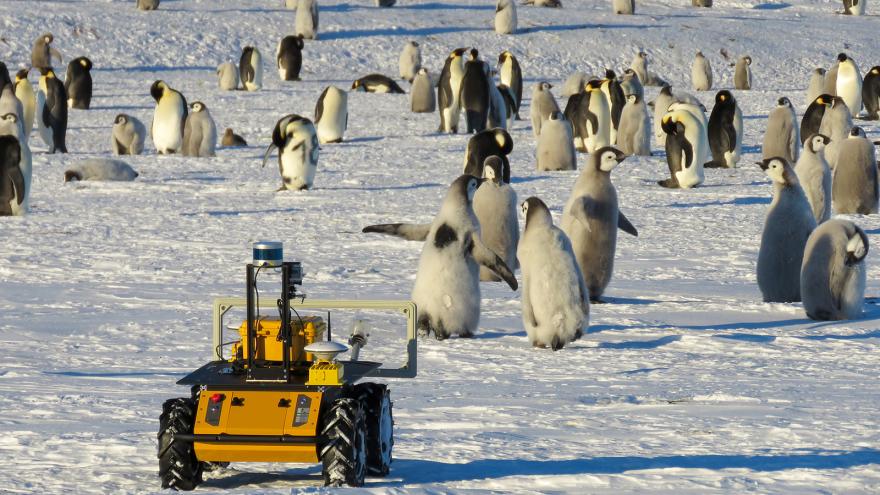 (CNN) -- Thousands of emperor penguins cluster on the ice of Atka Bay in Antarctica, mostly unaware that an interloper lives among them.

Slightly shorter than the average adult emperor, the 3-foot-tall (1-meter-tall) autonomous robot sits silently within the colony, nondescript compared with humans who sometimes emerge from a nearby research station.

The birds occasionally notice ECHO, an unmanned and remote-controlled ground vehicle, because "they exhibit curiosity to everything that they don't know," said Dan Zitterbart, associate scientist at the Woods Hole Oceanographic Institution in Massachusetts.

But it's a passing fascination for the emperors, who quickly move on from the static object. The penguins are unphased by the robot, which acts like a mobile antenna for an observatory monitoring about 300 of them each year.

At the South Pole of our planet, penguins reign supreme, and they have no predators on land. But the climate crisis could threaten their very existence. If greenhouse gas emissions continue to rise at their current rates, leading to warming temperatures and melting Antarctic sea ice, 98% of the emperor penguin population could all but disappear by 2100, according to a study published last year in the journal Global Change Biology.

In the study, the authors suggest that emperor penguins should be listed as threatened under the US Endangered Species Act.

"Emperor penguins live in a delicate balance with their environment, there is a sea ice 'Goldilocks' zone," said study author Stephanie Jenouvrier, seabird ecologist and associate scientist at Woods Hole Oceanographic Institution, in a statement. "If there is too little sea ice, chicks can drown when sea ice breaks up early; if there is too much sea ice, foraging trips become too long and more arduous, and the chicks may starve."

The chicks must shed their down before growing the waterproof feathers they use to swim -- but if they are still covered in down when the ice breaks, they'll sink.

As top predators, emperor penguins serve as sentinel species, meaning they are ideal species to study in a fluctuating ecosystem because they can reveal if something is wrong. By studying these birds, Zitterbart and his team can learn about the impacts of the climate crisis in Antarctica.

Surprisingly little is known about these penguins because Antarctica isn't the easiest place for scientists to access. Although it's crucial to learn more about the penguins and their ecosystem, the team didn't want to introduce a harmful human footprint in an already vulnerable environment or adversely affect the colony.

A successful trial run of ECHO this year is already showing how that may be possible.

Penguins on the move

Since 2017, Zitterbart and other researchers have been tagging 300 penguin chicks per year with a system similar to how dogs and cats are microchipped. It's part of the MARE project to measure the health of the Antarctic marine ecosystems through long-term monitoring of the emperor penguin populations over the next 30 years.

Capturing the 5-month-old penguin chicks is easy because they are amenable to handling and "quite goofy," said Céline Le Bohec, researcher at the Scientific Centre of Monaco and the University of Strasbourg's Hubert Curien Multidisciplinary Institute in France.

The research team uses small barriers to shield the other penguins from seeing the process. The adult penguins are entirely focused on feeding their chicks as they return from the sea, so fortunately they don't focus on the researchers.

Using Passive Integrated Transponders and Radio-Frequency Identification systems can allow for remote monitoring of the penguins. But the small sensors worn by the penguins don't have their own power supply, so they can only be read from about a meter or two away.

That's where ECHO comes in. The robot acts like a receiving station because it's mounted with wireless receivers, automatically retrieving data from the penguins' sensors.

The robot is a supplement to SPOT, or the Single Penguin Observation and Tracking observatory, deployed in 2013. The observatory is adjacent to the colony and near Neumayer Station III, the German Antarctic research base. It is equipped with 16 cameras that can capture images of individual penguins, as well as the entire colony, over an area spanning 9.7 square miles (25 square kilometers).

With ECHO, they don't miss out on a chance to collect data when the birds return to the colony to feed their chicks. And they no longer have to use SPOT to search through a crowd of 20,000 birds to find the tagged ones because ECHO picks up on them automatically.

By tracking and studying penguin behavior over time, the researchers can observe how these animals adapt as their environment shifts due to climate change. Microchipping the penguins allows the team to determine where the penguins go when they dive off the sea ice into the ocean and understand their foraging strategies. This insight can help determine the size of Marine Protected Areas.

During winter, ECHO can essentially be part of the massive penguin huddle that comes together as they try to protect themselves from the elements. It sits downwind and scans the penguins without needing energy to move or turn. In summer, the colony "loosens up," Zitterbart said. Then, the robot needs to move -- albeit very slowly to keep from attracting the attention of the penguins. The robot has lidar, or light detection and ranging, so it can detect obstacles while moving with the colony.

The first outing of ECHO this year was considered "year zero," Zitterbart said. Now that the researchers know the robot is feasible, and it's part of a program that has received funding from the National Science Foundation, they can apply lessons learned.

The robot has been able to withstand the low temperatures of negative 4 degrees Fahrenheit (negative 20 degrees Celsius) in Antarctica so far.

The team learned that ECHO isn't great with narrow turns, and it can get stuck in the snow. The condition of the sea ice is fit to drive on until about mid-December, when the summer starts and the ice gets too soft. The researchers are working on ECHO's algorithms to ensure that when the robot drives itself, it can figure out how to get unstuck.

But the most important thing the scientists learned is that the penguins aren't scared of ECHO or any of the little noises that it makes. When ECHO does drive, it moves slower than a human walks.

"You have to be really, really careful and we're trying to do more science with less stress," Zitterbart said.

The researchers are always wary of stressing the birds and the colony. In turn, added stress could bias their results, Le Bohec said.

The research happening at Atka Bay has become a multidisciplinary effort that has brought scientists of all kinds together, and "none of us could run it alone," Zitterbart said.

Zitterbart and his colleagues usually stay for about six to eight weeks every year. His favorite time to be there is in April or September, during Antarctic winter, when there are a "gazillion colors in the sky every day." And with only nine other people at the research station, it's nice and quiet.

If the population of a top predator begins to decline, it suggests that many other species are declining as well.

"They're an interesting species because they amplify and accumulate all of the modifications of an ecosystem," Le Bohec said.

Long-term monitoring could reveal if there are any changes to where the penguins swim as they look for food or any other behaviors that could indicate a shift in the ecosystem.

For instance, the Atka Bay colony now starts their breeding cycle a month later, which means they need sea ice for longer. Warming temperatures could eliminate that sea ice too early in the season, which could force the penguins to move to another location that may not support their massive colony.

"Biodiversity in the Southern Ocean is so small, compared to more temperate regions of the world, that losing any species there is kind of devastating," Zitterbart said.

Watching the thousands of penguins in Atka Bay, Zitterbart is amazed when he considers the fact that they thrive in a hostile ice desert.

"Evolution is capable of filling every single last niche on the planet and ultimately comes up with an animal that is capable of surviving this area," he said. "That is astonishing to me every time I come back."