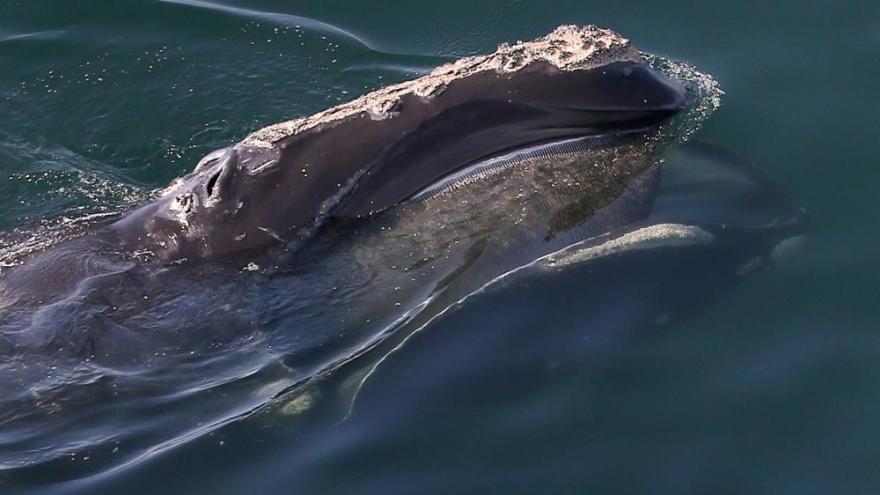 North Atlantic right whales are at risk of extinction.

(CNN) -- A right whale is entangled in fishing gear near Nantucket Island in Massachusetts, and officials haven't been able to coordinate a response due to a pod of 60 others nearby.

Experts say the whale may drown if it isn't freed.

"It's a recipe for disaster that around 60 North Atlantic right whales have been spotted near Nantucket Island, an area with voluntary boat speed restrictions, with one already entangled," Oceana fisheries campaign manager Gib Brogan told CNN.

The National Oceanic and Atmospheric Administration (NOAA) established that voluntary vessel slow-down zone after several of the whales were spotted in the area last week, a local paper reported.

A spokesperson for NOAA confirmed the entanglement to CNN.

The situation underscores two of the biggest threats to right whales -- entanglements in fishing gear and collisions with boats, according to the nonprofit organization Oceana. The most recent report by the NOAA confirmed 76 cases of large whale entanglements in 2017, with six of those cases involving a dead whale. The North Atlantic right whale is one of the five most frequently entangled large whale species, according to the NOAA.

These entanglements slow right whales down, making it difficult for them to swim, reproduce and feed.

"We know right whales are dying from fishing gear entanglements and ship strikes, and with almost 15% of the entire endangered population in this location, they are sitting ducks at risk of injury and death," Brogan said. "We must reduce the number of lines in the water and require ships to slow down with mandatory speed restrictions immediately, before we start seeing carcasses on our beaches."

Right whales swim very slowly and near the surface, and since they are dark skinned and lack a dorsal fin, it makes them hard to spot. At normal operating speeds, ships are unable to maneuver to avoid them and right whales swim too slowly to move out of the way.

Right whales were once more widespread, but are now mostly found in the U.S. and Canada due to climate change. As right whales' preferred food, which are called copepods, move further north to avoid the warming waters, right whales are more concentrated in the US and Canada.

Since 2017, there have been 28 confirmed right whale deaths and approximately 400 remain in the world. That's a drastic drop from a peak estimate of 21,000.

The organization recommends the reduction in vertical lines for fixed-gear fisheries, enacting seasonal speed restrictions, modifying fishing gear to reduce the likelihood of entanglements and implementing fisheries closures when right whales are present.

Extinction is inevitable for the species if the trends of the last decade continue, according to Oceana.

Oceana urges the US and Canadian governments to act quickly to prevent the first large whale extinction the Atlantic Ocean has experienced in centuries.

Clarification: This piece was updated to clarify that NOAA doesn't believe the animal is in immediate danger.