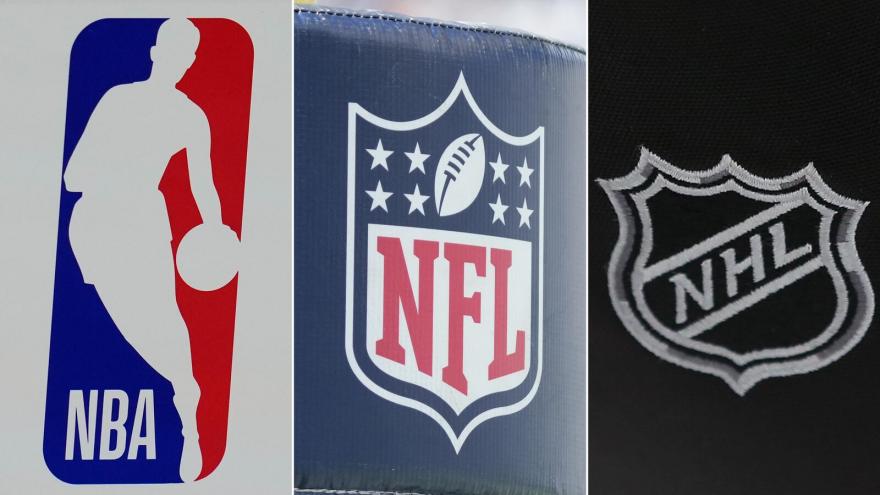 The NBA, NFL and NHL have each struggled with Covid-19 outbreaks in recent weeks, a reflection of what's happening in cities across the US.

(CNN) -- When football season kicked off back in September, it felt like normalcy was returning to a world upended by Covid-19.

Fans packed stadiums at both college and professional games, eager to watch their favorite teams play, despite the surging Delta variant of the coronavirus.

Basketball and hockey's respective seasons soon began, too, with additional protocols, mandates and testing requirements for players and staff.

And the Omicron variant, which scientists believe to be more contagious, is increasing its grip on the US -- another potential threat to pro sports leagues, their players and their seasons.

"The sports world, until very recently -- like the last week or maybe two weeks -- had done a pretty good job of keeping a lid on things and that was because they were actually doing better than most areas of the real world," said Zach Binney, a sports epidemiologist at Oxford College at Emory University.

What started out as a sports season of hope has turned into one of, yet again, panic and uncertainty as leagues attempt to adapt to the most recent wave of infections, a reflection of what is happening in localities across the country.

"Kudos to the sports leagues because they are actually doing a fantastic job of surveillance testing," Adams said. "And the rest of the country, we're driving a car down a dark road with the headlights off while looking in the rearview mirror, and we hit a bump and we say what was that? That's our surveillance system right now for Covid."

All three major sports leagues in season right now -- NFL, NBA and NHL -- implemented strict testing protocols early on and required at least Tier 1 personnel, like coaches or anyone with direct contact with athletes, to get vaccinated. No major professional sports league in the United States has required its players to be vaccinated.

That has not prevented the most recent outbreaks, though, forcing the leagues to tweak their Covid-19 policies.

As of Tuesday, 28 NFL players have tested positive for Covid-19, just one day after the league reported 37 positive tests Monday.

The league announced a return to more stringent protocols Thursday, which will be effective until Monday, according to a league memo. Teams have to reimpose restrictions such as mandatory mask-wearing while indoors in team facilities, social distancing, grab-and-go meal service in team cafeterias, limits on the number of people allowed in weight rooms, restrictions on activities outside the facility including dining out to eat on the road and all-virtual meetings.

The NBA and its players' union recommended all vaccinated players and other personnel in close contact with players receive a booster dose "as soon as possible," according to a November memo. The memo also noted 26 of the 30 teams compete in areas with Covid-19 transmission that is labeled by the Centers for Disease Control and Prevention as "high."

In a memo Saturday, the NHL and its players' union outlined "enhanced measures" that will be in place through at least January 7, including a mask requirement at all times inside NHL club facilities and during travel. The league is also restricting dining at indoor restaurants while teams are on the road unless they're seated in private areas.

Daily Covid-19 testing will be required for anyone who travels with an NHL club and others who are in close proximity to players. There may also be additional pre-game testing "on a case-by-case basis."

Surge shows pandemic is not over, experts say

Binney told CNN he thought waning immunity and an uptick in contact over the Thanksgiving holiday potentially contributed to the recent breakouts, but he thought the potential surge would have "hit earlier and slower" than the recent spike in professional sports leagues.

Alex Piquero, chair of the department of sociology and criminology at the University of Miami, told CNN "what we're seeing in the general population is what we're starting to see in some of the athletic leagues."

Recent surges in positive cases have forced cities to reinstate mandates and protocols not seen since earlier in the year. As of Wednesday, the US average of daily Covid-19 cases -- 119,888 -- is 50% higher than it was a month ago, according to data from Johns Hopkins University.

As a result, cities like New York are reimplementing mask indoor mandates. And as of Wednesday, California is requiring masks in indoor public settings for the next month.

Philadelphia announced Monday it will require proof of Covid-19 vaccination for admission to indoor restaurants, theaters and entertainment venues where food or drinks are served.

Dr. Scott Miscovich similarly attributed the ongoing struggles in professional sports in part to "waning immunity" and a lack of boosters.

Even though vaccination compliance across pro leagues is high, "we have now 50% at best immunity if you've had two shots," said Miscovich, the CEO of Premier Medical Group and the Covid testing medical director for USA Olympic swimming, track and field, rugby and gymnastics.

"We are not seeing a lot of the leagues prior to this pushing boosters," he said, "which is what was needed to get them up to a point where they're not going to get infected."

"The second thing is, hey, it's the holidays," Miscovich said. "I'm sure people are getting together, and that's going to lead to spread."

Piquero told CNN despite the mirage of potential normalcy, it's important to remember the pandemic isn't over.

"People have to realize that people are still dying," he said. "Imagine if you took Cowboys stadium, that seats 100,000. That's almost every single one of their home games eliminating those people from the face of the earth ... That's what this pandemic is doing."

The NHL and NBA announced postponements Monday. The NBA postponed two upcoming games for the Chicago Bulls because of an outbreak and the NHL announced they were postponing three Calgary Flames games because six players and one staff member entered the league's Covid-19 protocol.

Elsewhere in the NHL, the Montreal Canadiens announced Thursday their home game against the Philadelphia Flyers would be held in an empty venue, with the announcement being made less than two hours before the game.

"We have obtained assurances that beginning with our games in January, we will return to a partial capacity scenario and be able to host fans once more," the team's statement read.

On Friday, the NFL made the decision to postpone three Week 15 games due to 23 Cleveland Browns players landing on the league's Covid-19/Reserve list in recent days. Saturday's scheduled game between the Browns and the Las Vegas Raiders was rescheduled for Monday at 5 p.m. ET.

Sunday's scheduled games between the Washington Football Team and the Philadelphia Eagles and between the Seattle Seahawks and Los Angeles Rams will both be postponed until Tuesday. Both Tuesday games will kick off at 7 p.m. ET.

As college football transitions into bowl season and the NFL moves into the postseason, uncertainty looms over whether star athletes will be able to play live in front of fans.

"(Professional athletes) want to play, just like we want to watch them play and the fact that we're still watching sports in the middle of a worldwide pandemic is remarkable," Piquero said. "But we've got to be careful because teams start losing games, players start falling out. This is what can move to shutting things down for a week or two, and that's what leagues are trying to avoid."