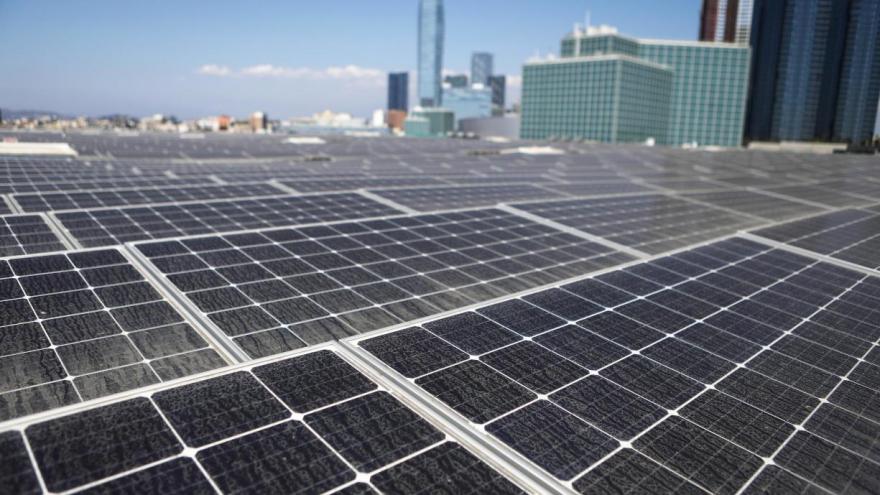 Solar panels are mounted atop the roof of the Los Angeles Convention Center in this September 5, 2018, file photo. A California researcher claims he's found a way to keep solar panels generating power long after the sun sets.

(CNN) -- Solar panels, true to their name, don't technically work at night. But a California researcher claims he's found a way to keep them generating power long after the sun sets.

Jeremy Munday, a professor in electrical and computer engineering at the University of California - Davis, is working on a panel prototype he says could do just that.

His research recently appeared in the journal ACS Photonics.

Here's how it could work: While solar panels are cold objects pointed at the very hot and bright sun to absorb light and generate power, Munday's proposal would work in reverse: His thermoradiative cells would heat up and point at the night sky, a much cooler object. The object that is hot compared to its surroundings will radiate heat as infrared light.

"A regular solar cell generates power by absorbing sunlight, which causes a voltage to appear across the device and for current to flow. In these new devices, light is instead emitted and the current and voltage go in the opposite direction, but you still generate power," Munday said in a statement. "You have to use different materials, but the physics is the same."

If his panels work, they could keep generating power without the need to store excess electricity in solar cell batteries or relying on fossil fuel-run power grids.

Solar panels don't produce energy at night or when the sun is obscured. Instead, they continue to provide power through net metering, in which surplus power is transferred to a public utility power grid -- often powered by fossil fuels -- to offset costs.

This happens when solar panels produce more electricity than a house needs in a day.

Other solar panels store surplus power to power through the night, though batteries can be expensive.

"Solar cells are limited in that they can only work during the day, whereas these devices can work 24/7, which is the real advantage," Munday told CNN. "Nobody wants to lose power once the sun sets."

Solar panels are more widely available now, but to compete with other energy sources, they're more affordable and less efficient, he said.

Munday's "anti-solar" panels would rely on fossil fuels in a sustainable way: In theory, they could run on wasted heat left over from the industrial process, he said. This could help achieve carbon neutrality, when carbon emissions are balanced with carbon removal so no net carbon is released.

There are some limitations to Munday's research, or snags he's working to fix.

The prototypes he's already made produce 50 watts of electricity per square meter, only about 25% of what traditional solar panels can generate during the day.

Plus, current solar panels have "decades of development" on Munday's prototypes, he said.