A rare yellow lobster, named Banana, has been caught off the coast of Maine 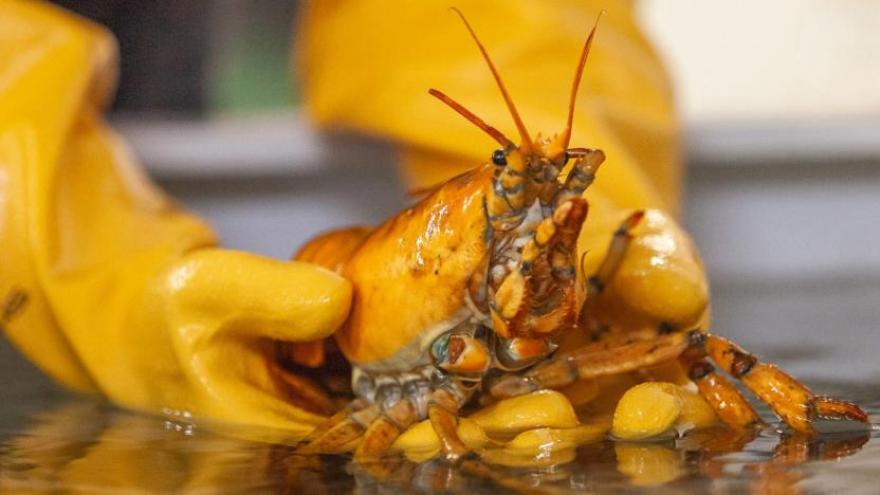 The odds of catching a yellow lobster are about one in 30 million.

(CNN) -- A rare yellow lobster has been caught off the coast of Maine and has been lovingly named Banana.

The University of New England (UNE) said in a news release that Banana was caught by lobsterman Marley Babb and donated to the university on Wednesday. The yellow color comes from a pigment in the lobster's shell and the odds of catching one are about one in 30 million, according to the Lobster Institute at the University of Maine.

Babb contacted the Maine Department of Marine Research (DMR) after his once-in-a-lifetime catch to see if they would be interested in housing the lobster.

Lindsey Forrette, a lab coordinator and chemical hygiene officer in the School of Marine and Environmental Programs said Babb drove two hours from his location in Tenant's Harbor to drop off Banana.

"UNE has cultivated strong connections with lobstermen and Maine DMR," Charles Tilburg, director of the School of Marine and Environmental Programs said in a statement. "It was through those connections that (researchers) learned about Banana and Lindsay was able to coordinate with Marley from there."

The University of New England is sharing an $860,000 grant from the National Science Foundation (NSF) with the Maine Department of Marine Resources, Bigelow Laboratory for Ocean Sciences, and Hood College in Maryland to study the impact that a warming Gulf of Maine is having on lobster larvae and their success in growing to adulthood.

"Banana is about a pound to a pound and a half and is settling in nicely here," Forrette said.