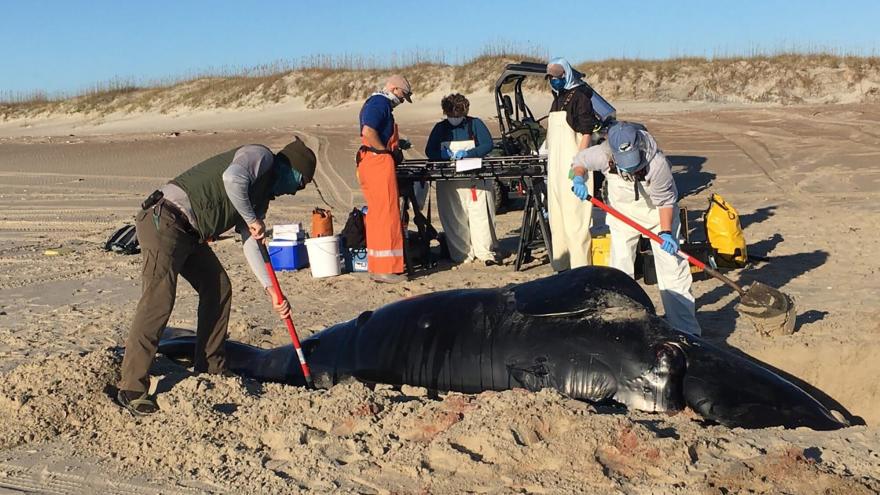 A whale stranding response team tending to a North Atlantic right whale calf that was discovered dead on the shore of a barrier island off North Carolina on Friday.

(CNN) -- A North Atlantic right whale calf was discovered dead on the shore of a barrier island off North Carolina on Friday, according to officials.

The right whale is one of the rarest marine mammals in the world, according the National Oceanic and Atmospheric Administration (NOAA), and there are only around 400 of them remaining.

The male newborn was found on the beach on North Core Banks, part of the Cape Lookout National Seashore. Preliminary reports indicate that the animal died during birth or shortly after, according to NOAA. Scientists performed a necropsy on the animal and took DNA samples to determine the calf's mother.

This is the beginning of the right whale's calving season, which begins mid-November and runs through mid-April. NOAA called this death a "devastating" start to the season.

"Each new right whale calf brings so much hope for this critically endangered species, and losses like this have a substantial impact on their recovery," NOAA said in a news release on Monday. "Their population has been experiencing a significant decline and high juvenile and adult mortality in recent years."

There was no indication of human interaction as a factor in the calf's death, according to NOAA. This species of whale has been experiencing an Unusual Mortality Event over the past three years, according to NOAA. Since 2017, at least 32 dead and 13 seriously injured whales have been documented by the organization.

"This represents more than 10 percent of the remaining population," according to a NOAA news release.

The leading cause in the whales deaths and injuries involve human interaction including vessel strikes and entanglement in fishing gear.

NOAA posted a news release on Monday, the same day they announced the calf's death, warning boaters to be vigilant as the whales are migrating nearly 1,000 miles along the Atlantic Coast.

The organization urges boaters to be vigilant, slow down and to give these endangered whales plenty of room. They also ask all fishermen to remove their unused gear from the ocean to help avoid entanglements, according to the release.

Calving season is extremely important for the species to regain population numbers. The female right whale population is dwindling due to entanglements and vessel strikes, according to NOAA. There are only around 100 females remaining.

Right whales do not reach reproductive maturity until about 10 years of age, according to Oceana, a non-profit ocean advocacy group. And they typically only produce one calf after a year-long pregnancy every three to five years. But NOAA has noticed that now on average, females are having calves every six to 10 years.

One of the reasons that biologist believe females are calving less often, according to NOAA, is the additional stress that entanglements have on the whales.

There were only 22 births, which is about one-third of the average annual birth rate, in the past three calving seasons, according to NOAA.

A report by Oceana last year researchers warned the species will soon be extinct unless something is done to save it.