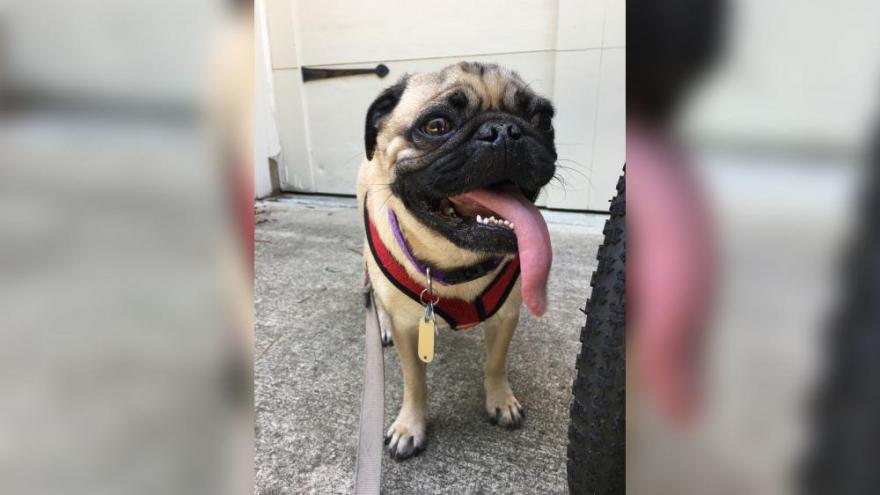 Winston wasn't feeling well for a few days but he is back to 100 percent.

(CNN) -- A North Carolina family's pug may be the first dog in the United States to test positive for coronavirus, according to researchers.

Three members of the McLean family -- Sam McLean, wife Heather and their son, Ben -- contracted Covid-19 last month. Sydney McLean, the couple's daughter, was the only family member to never show any symptoms.

The family found out their dog, Winston, tested positive for the virus too after they participated in a Duke University study about Covid-19 aimed at trying to find potential treatments and vaccines. As part of the study, members of the family under go weekly nasal swabs and give blood samples.

Chris Woods, the principal investigator of the study, said researchers have also been collecting samples from family pets to see how coronavirus spreads in households. Researchers did not use the commercial tests that are in high demand around the world to test the animals.

Although they haven't tested many pets, Winston's sample is the only one that's come back positive. He is believed to be the first dog in the country to test positive for the virus, according to the university.

"His (Winston's) amount of virus that we detected was very low, suggesting that he would not be a likely mechanism or vector of transmission of virus to either other animals or to, to humans in these households," Woods said.

Sam McLean, a researcher and emergency room doctor at the University of North Carolina at Chapel Hill, was the first member of the family to get sick, his wife Heather McLean said. He had treated Covid-19 patients before he got sick.

Winston did show some minor symptoms while his family was also sick.

"He had a small cough for a day or two right in the peak when all of us were sick and he didn't eat his breakfast one morning," Ben McLean told CNN. "But we didn't have any concrete, like, super alarming illnesses where we're like, 'we need to take him to the vet. He's like really sick.'"

Woods said researchers don't know if coronavirus made Winston sick, or if he had an unrelated ailment.

The McLeans have another dog and a cat, whose tests were negative.

Winston tends to lick things and likes to spend more time around his family, Heather McLean said. Their cat is more aloof, and their older pug likes to sleep most of the time.

"Winston is much more affectionate and we hold them all the time," she told CNN. "So if any of the animals were to have a positive viral test, it would be him."

Eight lions and tigers tested positive for Covid-19 at the Bronx Zoo, but the big cats are all doing well, according to a news release.

Two dogs under quarantine in Hong Kong also tested positive for the virus, according to officials there.

Experts have stressed that there is no evidence that pets play a part in transmitting coronavirus.

"I would not change our, our behaviors with our household animals at this point. They're really an important part of our ongoing mental health as we continue to participate in our social distancing to combat the pandemic," Woods said.

Dr. Anthony Fauci, the nation's top infectious disease specialist, said in a press briefing last week that "there is no evidence whatsoever that we've seen, from an epidemiological standpoint, that pets can be transmitters within the household."

William Schaffner, a professor of preventative medicine and infectious disease at Vanderbilt University School of Medicine in Nashville, said that it is extremely rare for a virus to jump from an animal to a human.

He said the first case in the Covid-19 pandemic was believed to have come from a market in Wuhan, China, but it has spread around the world through human-to-human contact.

"We still don't think this is common and we certainly don't think it's a major route of transmission in either direction," Schaffner said. "It's not common for people to give it to their pets, nor has it been demonstrated ever that anyone's ever gotten this virus from a pet."

Schaffner said it would be a good idea for people who are sick to social distance themselves from their pets, as well as their family members. The Centers for Disease Control and Prevention has made similar recommendations.

Heather McLean said that her family is now out of quarantine and are cleared to go back to work. Her husband has volunteered to work in a special Covid-19 unit in the emergency room, because he thinks he'll be at less risk than colleagues who haven't been infected.

Heather McLean and Ben McLean hope to be able to donate plasma, so their antibodies can help patients.

"We are feeling very grateful that we have the opportunity to participate in this research study," she said. "We are really hopeful that we can donate plasma to be able to help other patients."

She said Winston is also doing well. He is getting lots of walks, and enjoying following his family around the house to keep an eye on what they're doing.

CORRECTION: This story has been updated to correct the spelling of the dog owners' last name.