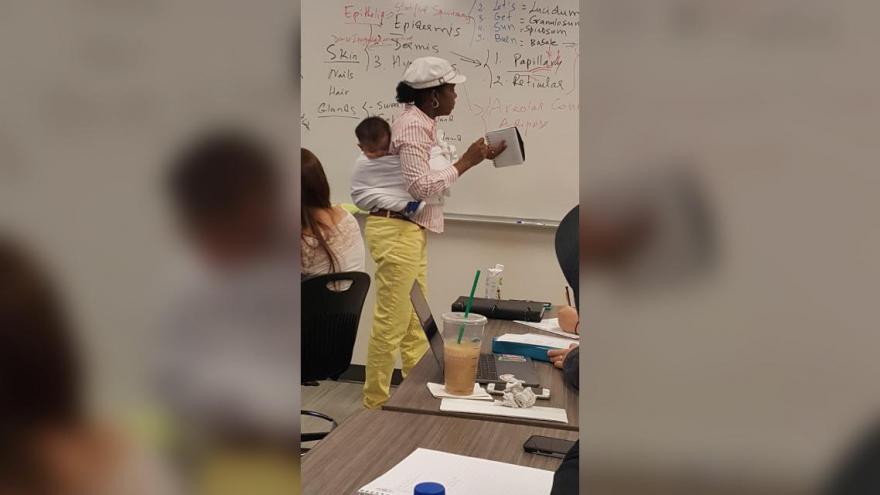 College professor Ramata Sissoko Cissé teaches an anatomy course with one of her student's children strapped to her back.

(CNN) -- Last Thursday, when a Georgia college student couldn't find a babysitter, her professor volunteered to hold the student's baby while teaching a three-hour anatomy class.

A photo from that class is showing the world what kindness and compassion look like.

Ramata Sissoko Cissé, an assistant professor of biology at Georgia Gwinnett College in the Atlanta suburb of Lawrenceville, told CNN that one of her students called her late the night before class to let Cissé know that her babysitter was sick. Due to that, the student would have to bring her baby to Cissé's anatomy and physiology class the next day.

The professor, a mother of three, gave her the green light. "For her to trust me made me feel like I had to help," Cissé said. "It's like a moral responsibility."

But in class, the baby kept moving, and it was hard for the student to hold her son and write at the same time.

However, Cissé couldn't hold the baby and write on the white board during her anatomy lecture.

The baby became a learning aid

So Cissé improvised. She found a white lab coat and tied the baby to her back.

The baby quickly fell asleep and stayed quiet for the rest of class. Cissé was able to incorporate the baby into the lesson, elaborating on concepts related to the nervous system, brain function and metabolism.

One student asked why he was able to sleep so quietly.

Cissé explained that he was cozy and warm, with her body temperature next to him, and the matching heat made it easier for him to relax.

Later when the baby became hungry, and the baby's bottle was cold, she explained that warming up the milk would help aid the baby's metabolism.

A spokeswoman for Georgia Gwinnett College told CNN that the child's mother asked to not be identified.

'I teach because they need to be prepared for life'

Cissé said the student e-mailed her after class to thank her, and she wrote back, "You're welcome, I'll always be there for you." And the student replied, "I know."

Those two words meant a lot to her.

Many of Cissé's students go on to become nurses or doctors, or work in other health professions. She said teaching them science is only part of her mission to prepare them for life after school.

"Love and compassion are part of the philosophy of my classroom," Cissé said.

She's hoping she can instill those qualities by modeling them in teachable moments like holding the baby during class as being a good health care provider is about more than just studying textbooks.

"I'm hoping they can spread love, take it to other people who need it," she said.