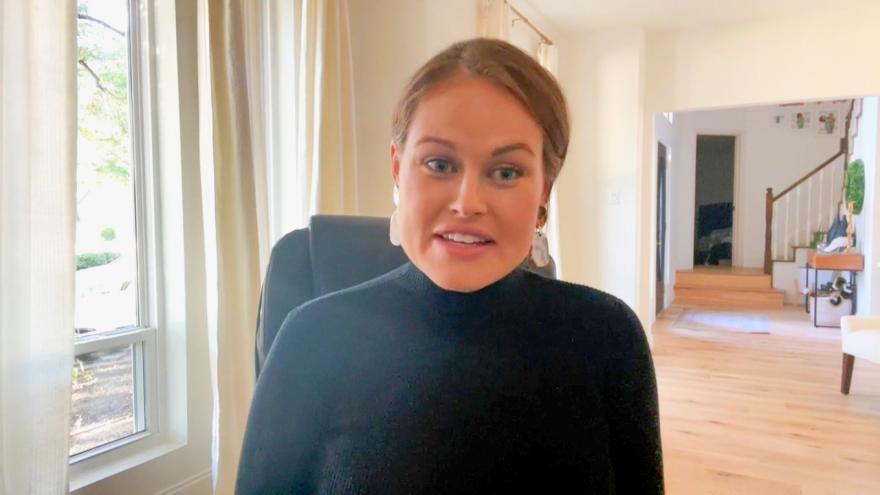 (CNN) -- Brandy Bottone was driving in the HOV lane meant for at least two people per vehicle in Dallas, Texas, two weeks ago when she was pulled over by police. The officer noted there didn't seem to be anyone else in the car, but Bottone had a retort -- she was 34 weeks pregnant.

"He said, 'Is there somebody else in the car?' And, looking around, I said, 'Yes there is,' and he said 'Well, where?' I pointed at my stomach and I was like, 'Right here,'" she told CNN on Sunday.

"He said, 'Well, it's two bodies outside of the body, so that doesn't count.' I was kind of in shock, and I was like, 'Well, in light of everything that's happened, and I'm not trying to make a huge political stance here, but do you understand that this is a baby?'"

The interaction, first reported by The Dallas Morning News, came days after the US Supreme Court ruled there is no federal right to abortion and declared abortion rights can be determined by each state. Texas, like other states led by conservative officials, has pushed to restrict abortion and has defined a fetus or unborn baby as a "person" in its penal code.

That determination could have significant effects on health care and fertility issues, including in vitro fertilization and treatment for women who have miscarriages or ectopic pregnancies. Bottone's experience also previews future legal battles related to the personhood of a fetus, said Loni Coombs, a former Los Angeles County prosecutor.

Unfortunately for Bottone, her reasoning didn't convince the officers on scene, she said.

"He kind of just brushed me off and asked me to go to the other officer to get my citation," she said. The other officer said similar things and told her, "Honestly if you go and fight this I'm sure it'll get dropped."

"That boiled my blood, that not only did I get dismissed and didn't have a conversation about it, but I also now just wasted my time, and I'm going to have to waste my time July 20 fighting a ticket that I feel I shouldn't have gotten," she said.

Bottone did not provide her own views on the Supreme Court's decision last month.

"That's not really why I made the stance that I did," she said. "It just didn't make sense to me why two different laws were not speaking the correct way."

The HOV lane, an acronym for High Occupancy Vehicle, is a protected lane only to be used by vehicles with multiple passengers. The idea is to encourage people to carpool together and cut down on traffic and emissions.

The Dallas County sheriff and the Texas Department of Transportation did not immediately respond to requests for comment.