A powerful tornado churned through northern Dallas, knocking out power and leaving damage in its wake 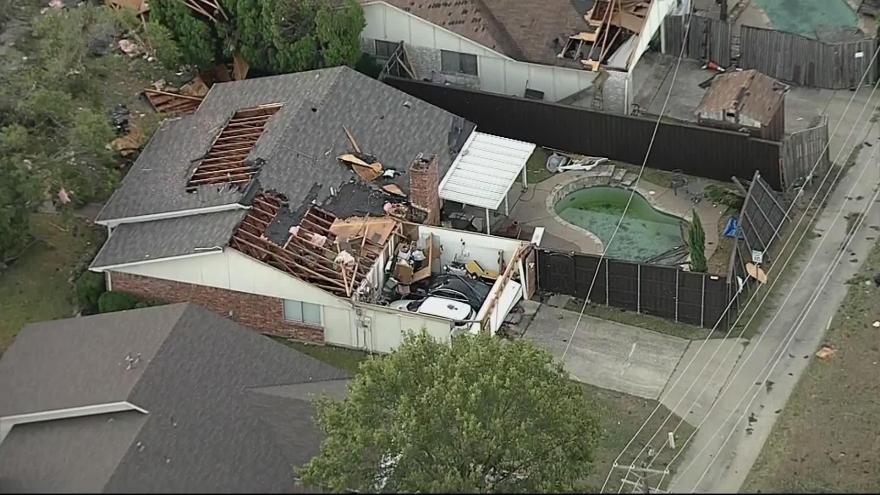 **Embargo: Dallas-Ft. Worth, TX** Aerial images of the damage caused by the tornado which churned through northern Dallas on Sunday.

(CNN) -- Authorities went door to door in parts of northern Dallas Monday after a powerful weekend tornado knocked out power and caused severe damage. A line of storms continued on to lash parts of the Great Plains, killing two people.

As the storm passed through northwestern Arkansas, one man was killed after a tree fell on his home, said Robert McGowen, a spokesman for Benton County Emergency Management.

Another person was killed in Valliant, Oklahoma after a tree fell on their home during the storms Sunday night, Oklahoma Emergency Management spokeswoman Keli Cain said.

The fallen trees trapped three people inside of a mobile home, the Valliant Emergency Management said in a social media post, but rescue operations were able to locate two of them and take them out. The third person did not survive.

That line of storms was also responsible for a powerful tornado in Texas.

The National Weather Service confirmed the tornado touched down in Dallas around 9:30 p.m. Sunday, and on Monday rated it as an EF-3 storm with winds of 140 mph. The twister damaged buildings, uprooted trees and snapped utility poles in half, CNN affiliate KTVT reported.

Three people were taken to hospitals with storm-related injuries that were not life-threatening, according to the Dallas Office of Emergency Management.

"Considering the path that the storm took, it went across a pretty densely populated part of our city, I think we should consider ourselves very fortunate that we did not lose any lives, no fatalities and no serious injuries in last night's storm," Dallas Mayor Eric Johnson said at a news conference.

At daybreak, more than 100,000 customers were without power in the Dallas/Fort Worth metropolitan area, power company Oncor said. That number stood at 50,000 later in the day.

The city is working with Dallas Fire and Rescue to conduct damage assessment to see if the city is eligible for any disaster declaration or FEMA funding, Dallas Emergency Management Director Rocky Vaz said.

"My heart goes out to the Texans impacted by this severe weather, and the people of Texas can rest assured that the state will do everything it can to assist those affected by these horrific storms," Abbott said in a statement.

Six schools across the Dallas Independent School District canceled classes due to the extensive damage some of the campuses sustained in the storm, the district tweeted.

Dallas Fire and Rescue Chief Dominique Artis said that his agency responded to "no less than 50 calls for utility wires down and over 40 natural gas leaks." He added that Fire Station 41, located east of the North Dallas tollway, sustained significant damage from a roof collapse due to high winds from the storm, but no firefighters at that location were injured.

There are no preliminary ratings of the damage and power of the tornado, the weather service said, adding it will conduct storm surveys on Monday and Tuesday.

Benton County, Arkansas, where the man was killed during the storm, had multiple reports of downed trees and power lines, according to the county's emergency management agency.

The line of storms responsible for the tornado moved to other parts of the Plains Monday.

Storms will continue to be a concern as the cold front sweeps east, CNN meteorologist Monica Garrett said. Although the tornado threat will diminish, damaging winds will be a threat from Tennessee to the central Gulf Coast.