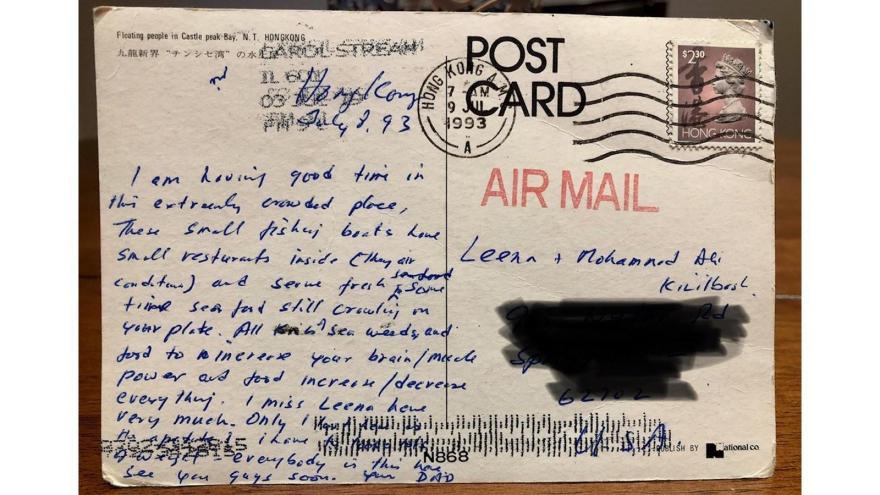 An Illinois woman is hoping to solve a 26-year-old mystery after a postcard from Hong Kong arrived in her mailbox last week.

(CNN) -- An Illinois woman is hoping to solve a 26-year-old mystery after a postcard from Hong Kong arrived in her mailbox last week.

Kim Draper told CNN she thought the postcard was just delivered to the wrong house when it arrived on July 8.

"I first looked at it and I just thought it might be [for] one of my neighbors that I didn't know, because it's in such good condition," Draper said. "And then I really got to looking at it and reading it, and was like, 'This is from 1993.' It kind of blew me over."

The postcard has a picture of traditional Chinese boats and was addressed to Leena and Muhammad Ali Kizilbash.

The message opens with "I am having a good time in this extremely crowded place" and signs off with "See you guys soon. Your Dad."

Draper said she's lived in the house with her husband and 12-year-old son for almost four years, and this is the first time she's gotten the couple's mail. The card indeed arrived at the correct address -- just more than a quarter-century late, she said.

She decided to try to find the couple.

Draper said the person she bought the house from didn't know them, but thought that they might have rented the house from a previous owner. Their names also didn't show up in online property tax records.

She found a Leena Kizilbash on Facebook in Massachusetts, but didn't see a way to contact her to find out if she was the right person.

She even did an interview with her local newspaper.

"I was hoping that maybe if someone saw it in our local newspaper, maybe a family member, maybe they could reach out and let me know," Draper said.

She said a few readers have have tried to help, but she hasn't gotten any solid leads.

Draper said she hopes she can get the postcard in the couple's hands.

"I'd really like to meet them. I don't want to just throw it in the mail," she said.

She said her friends and coworkers are also invested in the search and "are waiting on bated breath" to find out how the story ends.