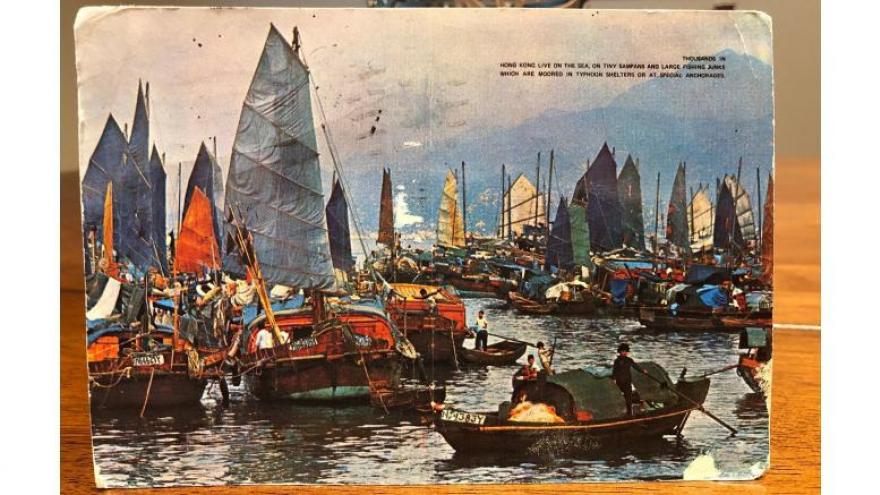 (CNN) -- It took 26 years for a postcard to make it from Hong Kong to Illinois, but the rest of the journey should go much quicker.

The postcard, dated July 8, 1993, arrived in Kim Draper's mailbox in Springfield on, of all days, July 8.

It was addressed to Leena and Muhammad Ali Kizilbash and signed, "Your Dad."

Draper thought they might have been previous owners but didn't find their names in property records. The home's last owner didn't know them either, she said.

So, Draper shared the mystery with her local newspaper and then with CNN, in hopes someone who knew them would see it.

Kizilbash learned about the postcard from a friend who heard about it on the radio, he told CNN.

It had been sent by his dad, Masrour Kizilbash, who'd stopped in Hong Kong on his way to work on a dam project in China. At the time, Muhammad Ali Kizilbash would have just graduated high school and his sister, Leena, been prepping for medical school, the younger man said.

The elder Kizilbash's work as a geotechnical engineer took him all over the world, and he always sent postcards -- from Costa Rica, Jordan and other far-flung places -- because international phone calls were pretty expensive, his son said.

"That's what he used to do," he said. "In the past, when we were younger, he traveled a lot for work, and he would often send us a postcard from wherever he was."

His parents eventually sold the house, settled abroad, then moved to the Chicago area, where Muhammad Ali and Leena both work as doctors, he said.

It 'reminded me of being young again'

It was Masrour Kizilbash, 78 -- who only recently stopped traveling for work -- who reached out to the local paper, The State Journal-Register, and asked journalists to send Draper a message, she said.

"He said he really wanted to thank me for the depths of what I had gone through to find him," she said. "He was just so nice."

Kizilbash told Draper by phone that he remembered writing the postcard and even buying the stamp after having lunch in Hong Kong, she said.

"He didn't know that they never received it," Draper said

Kizilbash and his wife, Yazmin, even invited Draper to their house, she said.

"I hung up the phone with them crying because they're such genuine people. I can't wait to meet them," she said.

Draper wants to deliver the postcard in person. "If anything, I'll drive it back myself," she said of the roughly 200 miles between the state's capital and its biggest metro hub.

Just hearing about the card brought back happy memories for Muhammad Ali Kizilbash, he said, particularly in an age when email and voice chat apps largely have replaced written correspondence.

"It kind of reminded me of being young again, you know, when he used to be on those trips and we'd get those postcards and oftentimes we'd visit him wherever he was," the son said. "Nowadays, you don't get postcards anymore. It was kind of nice to get them."