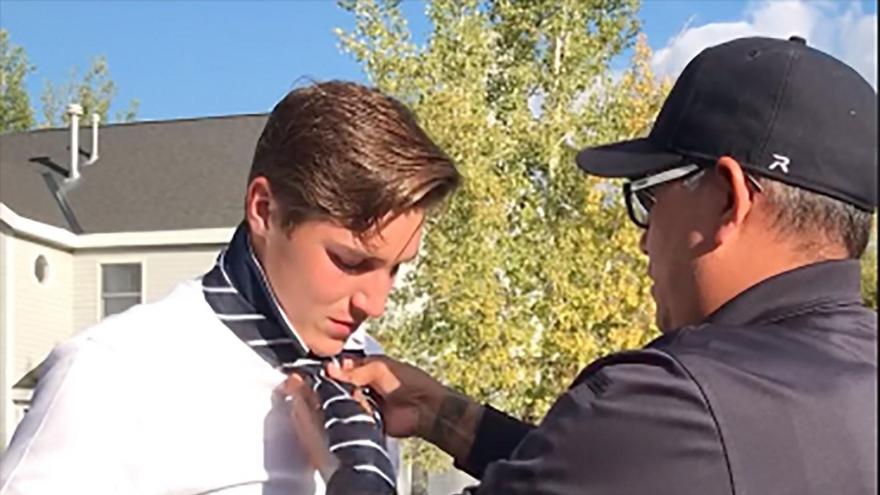 A high school senior from Park City, Utah, heading to his last homecoming dance hit a snag this weekend when he couldn't figure out how to tie his tie.

(CNN) -- A high school senior from Park City, Utah, heading to his last homecoming dance hit a snag this weekend when he couldn't figure out how to tie his tie.

Jake DeLeo, 17, told CNN affiliate KSTU he was at home watching YouTube videos trying to learn and was running late to meet up with his friends for pictures. His mother, Christy Carter, even tried her hand at making the knot but to no avail.

Jake and his mom ditched the tie efforts and jumped in the car to meet the others. As Carter was driving, she saw flashing lights behind her and pulled over for not coming to a full stop at a stop sign, KSTU reported.

But what happened next was unexpected, and Carter caught it on camera.

Park City Officer Mike Carrillo asked why Jake and his mother were in a hurry, and Jake asked whether the officer knew how to tie a tie, KSTU reported. So Carrillo had Jake get out of the car and taught him.

"It's not every day you have a police officer tying your tie for homecoming, Jake," Carter can be heard saying in the video.

When Carrillo was done, Jake said "thank you" and then asked the officer whether he could give him a hug.

Carter posted the interaction on Facebook, saying the officer "saved the day in an unusual way for a stressful, sinking, single Mom moment."

She said she didn't get a ticket and is grateful to the officer for taking time to help.

"To make an impression on someone's life -- I'm always wanting to help people," Carrillo told WSTU. "So it hit home for me."

The moment didn't go unnoticed by the police department, which also shared the video on its Facebook page.

"Officers like Mike Carrillo of the Park City Police Department's Uniform Section are the kind-hearted Officers who quietly do good deeds for Parkites in need," reads their post.

"We are proud of Officer Carrillo and his actions to turn a potentially negative experience into a positive one."