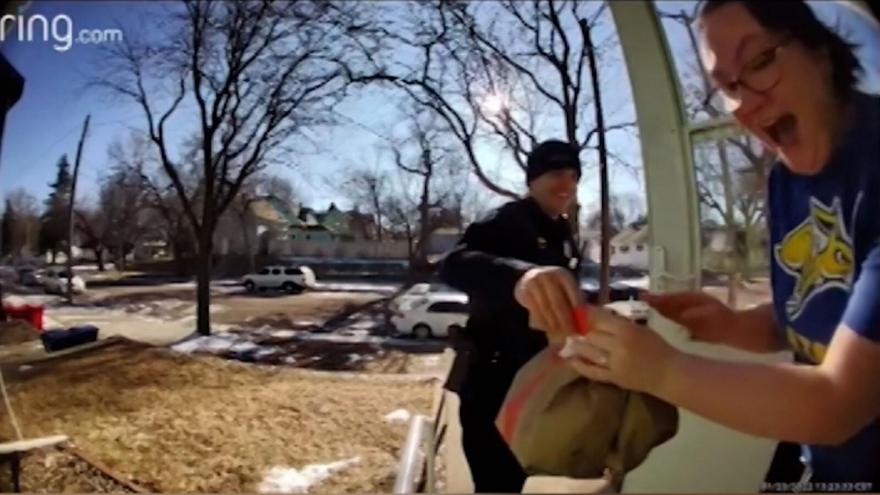 An official escort for her lunch was not what Anastasia Elsinger ordered from DoorDash on Tuesday, but that's what she opened her door to find.

(CNN) -- An official escort for her lunch was not what Anastasia Elsinger ordered from DoorDash on Tuesday, but that's what she opened her door to find.

"I know I'm not who you were expecting," a Sioux Falls police officer says in video captured by her doorbell camera.

"Your driver got arrested for some things he had to take care of, so I figured I'd complete the DoorDash for you."

Elsinger, a graduate student at South Dakota State University, had ordered a wrap, curly fries, turnovers and a drink from Arby's as she was studying and didn't feel like cooking.

When her delivery app showed that the driver had stopped a couple of blocks away, she went outside to see if her food was going to the wrong house.

That's when she saw police had pulled the vehicle over.

"I was like, 'Oh, shoot, that stinks. My food will be a little bit late,'" she told CNN on Wednesday.

Elsinger assumed that the driver would make the delivery once the traffic stop was over.

Instead, she got Officer Sam Buhr.

She immediately thought something was wrong -- until Elsinger noticed the officer was holding two bags and a drink. Laughing, Elsinger thanked Buhr, who chuckled as he returned to his vehicle.

The delivery driver had been pulled over for a traffic stop and had an outstanding warrant, Sioux Falls Police Department Public Information Officer Sam Clemens told CNN. Clemens confirmed it was Buhr who helped complete Elsinger's delivery.

DoorDash says it works closely with law enforcement and runs background checks on all drivers. A spokeswoman said DoorDash is actively looking into this incident and have been in touch with local law enforcement.

"We're grateful to the law enforcement officer for stepping in and ensuring this customer received their order," the spokeswoman said in a statement.

Clemens joked during a media briefing on Wednesday that reports of "an officer that was moonlighting as a DoorDash employee while on duty" were "not exactly accurate."

"It's not like we have officers that are out delivering food, but the little things like this, going above and beyond helping people out that's the things that we do, and probably more often than than people realize," he said.

Elsinger said she shared the video on social media and with a local group because she wanted the police department and the community to know about Buhr's extra effort.

She didn't know his name at the time, so she hoped the clip -- and her appreciation -- would get back to him.

Elsinger told CNN she did eventually get in touch with Buhr's sister to pass on her thanks.

The video has been viewed more than 11.5 million times on TikTok alone.

"There's so much negativity in the world right now and this is just something that's so funny and so happy that I was like, 'more people need to see this. This is hilarious,'" she said.