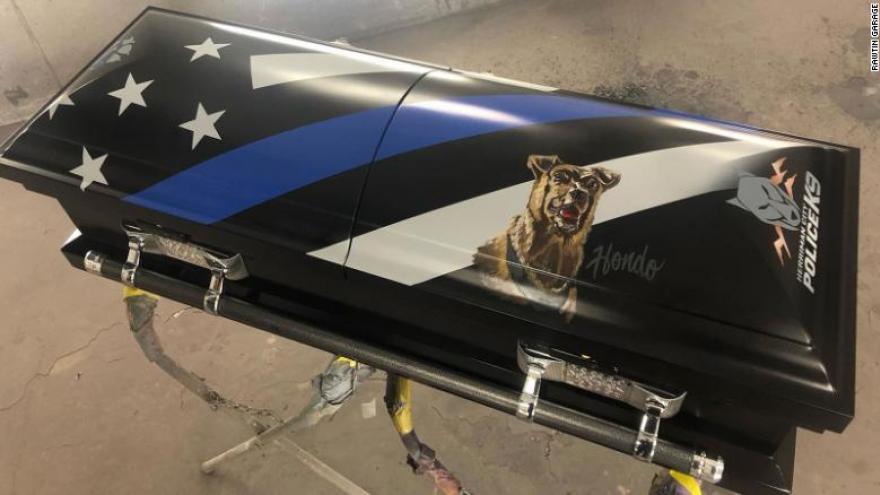 (CNN) -- A Utah paint shop that specializes in motorcycles and classic cars has designed a customized casket for a fallen police dog.

Hondo, a K-9 with Herriman City's Police Department, was shot while assisting officers apprehending a fugitive in Salt Lake City on February 13. Hondo suffered a gunshot wound to the sternum and died at a nearby veterinary hospital.

"They asked if we could get something together since we have done work on their motorcycles before," John Ward, owner of Rawtin Garage, told CNN.

"What an honor it was to paint a hero's casket," the garage posted on Facebook.

The crew at Rawtin Garage normally custom paints motorcycles and classic cars this was their first casket design.

Hondo, a 7-year-old Belgian Malinois, was trained in Europe before beginning his police career in 2015.

Hondo and his handler, Sgt. Ben Ricks, were one of the top K-9 teams in the state, according to police. Over his career, Hondo helped with over 100 felony arrests and took hundreds of pounds of narcotics off the streets.

"PSD Hondo was a true warrior," said Carr. "And his actions last night assured his loving friend and partner Ben would be able to return home to his wife, children and HPD family."

A public memorial service for Hondo is scheduled for Saturday, February 29, at Herriman High School.