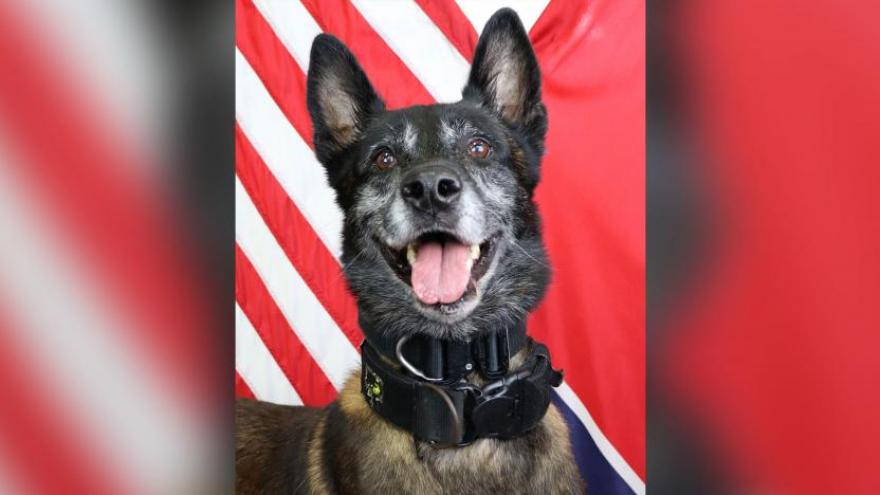 (CNN) -- A Tennessee police department is mourning the loss of a K-9 officer that died after suffering gunshot wounds when a man opened fire on a patrol car.

The La Vergne Police Department announced the death of Sjaak (pronounced Jacques) on its Facebook page on Wednesday. The Belgian Malinois has been with the department since 2014.

Sjaak was shot three times on Tuesday when a man opened fire on his handler's patrol care. The handler, Officer Justin Darby, was not injured in the shooting or subsequent chase, the department said.

"Our hearts are broken," interim La Vergne Police Chief Chip Davis said in a statement. "Our K9s are members of the LPD family. Sjaak was an amazing and loyal dog. We ask everyone to keep Officer Darby, his family, and all of the La Vergne officers in your thoughts and prayers as we deal with this loss."

Sjaak is the first line of duty death for the department, according to its statement.

The Tennessee Bureau of Investigation is investigating the incident. According to a TBI statement, Darby has just left a police station when a vehicle pulled along the passenger side and the driver fired shots into the patrol car.

Darby and other officers pursued the driver, who pulled into a residential complex, exited his vehicle and began shooting at the officers, who returned fire, according to the TBI.

The man got back in his vehicle and drove further before striking a parked car and stopping. Officers found the man had suffered a gunshot wound. He was taken to a hospital, where he was pronounced dead, the TBI statement said.

Darby realized after the shootout that Sjaak had been wounded three times. The dog was taken to a veterinary hospital where he underwent surgery on Wednesday but did not survive.

La Vergne is a suburb of Nashville with an estimated population of 35,716, according to the Census Bureau.

The K-9 was given a funeral procession with a police escort through the city on Thursday before he was taken to Faithful Friends Pet Memorial Services in Nashville for a burial with full honors. Video taken by CNN affiliate WSMV showed officers wiping tears from their eyes as Sjaak's body was placed in a police SUV for the procession.

"A K9 is more than just a dog to our handlers, they're a partner," Davis said.

The department said a memorial service for the dog is being planned for a later date.