A plane crashed while on a skydiving excursion in Hawaii. All 11 people aboard died 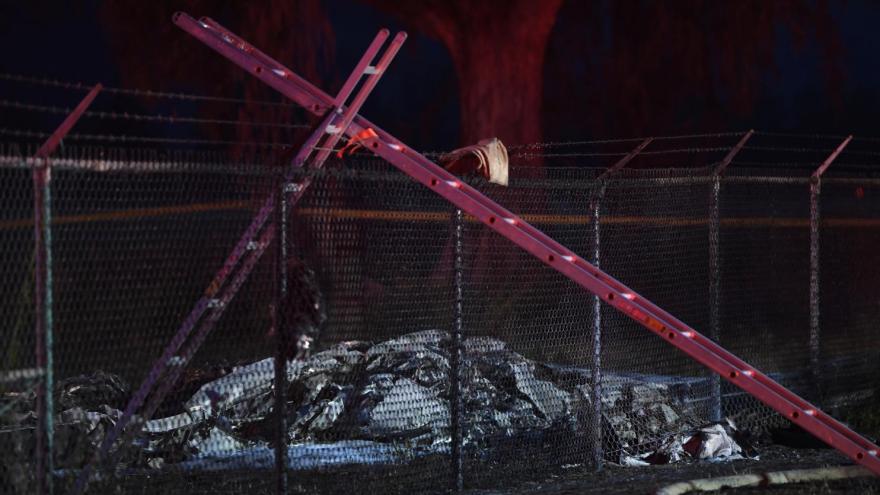 Remnants of an aircraft carrying nine people lies on the ground near a fence that surrounds Dillingham Airfield in Mokuleia, just off Farrington Highway, Friday, June 21, 2019. **Credit: "(Bruce Asato/Honolulu Star-Advertiser via AP

Lemaster was among eleven people killed Friday when authorities said a small plane crashed during a skydiving excursion in Hawaii and erupted into flames. The Hawaii Department of Transportation on Saturday updated the number of fatalities.

"I don't have an explanation for the utter tragedy that has happened," Elkins wrote.

"But Larry Lemaster would never want one person to waste a single minute of their life mourning his. He was doing what he loved. We spoke about this on many occasions."

The Beechcraft BE65 twin-engine plane crashed during taking off Friday evening at Dillingham Airfield on Oahu's North Shore, the Federal Aviation Administration said.

The names of the passengers have not been formally released by authorities.

Elkins said her "heart also goes out to" the Oahu Parachute Center and the loved ones of friends who perished in the crash.

"Today is the worst day of my life. My son has lost his father... He wants you to celebrate his life and your own. Love who you love with great intensity. Do what makes you happy. Be the person you want to be because obviously tomorrow is not guaranteed," she wrote.

"There really wasn't anybody like him," Hart told CNN Saturday. "He just saw the good in everyone... I've never met a person like him, and I probably never will."

He said he spoke with Elkins and she was on her way to Hawaii. Lemaster, whose last performed with Team Fastrax in the fall, loved sharing the sport as a tandem instructor, Hart said.

The cause of the wreck wasn't immediately known. The plane was carrying passengers who intended to skydive, and it crashed around 6:30 p.m. at a fence away from the runway, Honolulu Fire Department Chief Manuel P. Neves told reporters Friday night.

The plane was engulfed in flames when firefighters arrived, Neves said.

Some family members of those aboard were at the airfield when the plane went down, Neves said.

"I am closely following the tragic developments out of Dillingham Airfield this evening," Honolulu Mayor Kirk Caldwell tweeted. "At this time our thoughts and prayers are with the family and friends of the victims."

The National Transportation Safety Board was sending a team to Hawaii on Saturday morning to investigate the crash.

The airfield, roughly a 35-mile drive northwest of Honolulu, is a general aviation airport operated by the state Department of Transportation under a 25-year lease from the US Army, Hawaii's government website says.

The state leases 272 acres of the 650-acre Dillingham Military Reservation and operates the single 5,000-foot runway primarily for commercial glider and skydiving operations.